For the religious among us who choose to believe lies, the "questionable parody" of this website called Wikipedia have an article about Technocracy.

The robot ruler~A giant robot smashing one of many technocratic societies.

A technocracy is both a form of government and a religion. In a technocracy, a giant robot rules over a group of humans. It can smash anyone of them for any reason at any time. This keeps the humans alert and on their toes. Unfortunately, no technocracy has lasted very long due to the overzealous nature of robots to smash humans. Most technocracy based nations are zealously smashed out of existence within minutes.

About five million years ago, God said "Fuck you, fuck you, fuck you, you're cool, and fuck you. I'm out of here." During this power vacuum, many beings of great power and clout stepped forward. Some of those beings were Hitler, Jesus, Oscar Wilde, and Chuck Norris. Many factions came and went. The rulers and gods themselves also changed over time. Jesus became Robot Jesus. Hitler became Ann Coulter. Like Jesus, many of the rulers assumed robot form to enhance their puny flesh bodies. Of course, they later transformed into giant robots because those are approximately eleventy billion times better. At first, the robots just smashed humans for fun. Eventually, they decided it would be better to be worshipped and obeyed by the very people they smashed. Hence, they created the first technocracy.

To be defined as a technocracy, a society must have all of the following properties.

1. Robot Ruler
The society's primary source of authority must be a robot. It is preferable the robot be a giant robot. This makes it much easier to smash the humans.
2. Robot God
The society's primary deity and receiver of worship must be a robot, preferably a giant robot. It is better if the robot is plated in gold or some other shiny material to give it that "new God look." A bright external light source or some inner glow will also work just as well.
3. Human Populace
The majority of the population must be humans. This is because humans are the most fun to smash. Humans display fear which leads them to perform humorous acts such as begging for mercy, sobbing uncontrollably, peeing themselves, and sacrificing others in the futile hope that they will be spared.
4. No Chuck Norris'
Chuck Norris may not be included in the populace because he can not be smashed. This would undermine the core principle of a technocracy, that is, a smashable populace. This requirement is often disputed because Requirement #3 states "a human populace." Chuck Norris is definitely not human. Therefore, this requirement may be redundant. 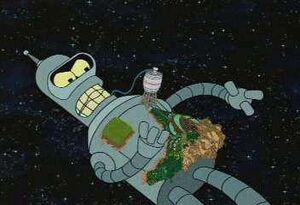 Lord Bender about to crush the puny humans.

An almost perfect example of a technocracy was chronicled in the ancient texts of Futurama. It showed almost all of the key attributes: a giant robot god and smashed humans. Unfortunately, like most technocracies, this one ended very quickly because of the robot ruler. Despite its short duration, it was quite productive. Bender's followers created both The Great Brewery and nuclear weapons despite being a subsistence agricultural society. Beer and nukes, what more could a giant robot god ask for? Bender's followers were also graced by Bender's wisdom. Lord Bender sent to his followers a prophet, Malachi. It means, um, "He who really loves the Metal Lord." When Malachi returned to the people, he cried, "Behold: The One Commandment. 'God Needs Booze'"

Puny Humans! You dare speak of us? You are weak and to be despised! Long Live Megatron!