The Life and Times of Kraft Dinner 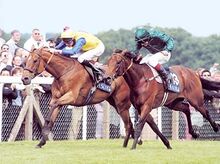 The greatest Triple Crown victor chalks up another win in 1960.

Kraft Dinner, for those who have not yet heard the tale, is the name of the most famous racehorse-turned-detective novelist who ever lived. His story is one of the most notable and inspiring in the annals of American folklore. From 1956 to 1961 he won a spirited and heroic string of four and a half Kentucky Derby victories. A Triple Crown victor in 1957 as a three-year-old confirmed his place in history: however, a loss to Uncle Ben's Converted Rice in 1958 set up one of the most anticipated rematches in ’59. Kraft Dinner won by a nose in their second tilt. This unqualified legacy of success was shattered in a moment by a freak Chunnel-emulation syndrome accident during the ’62 Derby that severed two of the gallant steeds legs, broke the others and left his nose bleeding. Three other horses suffered from multiple flying limb contusions and compound stump insults rendering them as if they had been cycled through a tornado. The sport of kings cried out in dismay. The original owners threw away their stock. Theirs was a great mistake. The stage was set for the greatest comeback since W.C. Fields’.

Named for his light tan color that infringed on orange and the white mark on his forehead that reminded the hands of the dairy products commonly included with their evening meals, KD, as he was known to favored associates, came out of the fabled stables of John Locksley Kraft III: the stud was Ecto One himself, and the mare none other than Maid Marion’s Chips. The proud new owner in 1954 was a faceless consortium of Kansas City gamblers, hiding behind a legitimacy veil of corn commodities brokerage. They remained at arms-length from their property, and had little effect upon what he would become.

The Preakness Stakes and Belmont Stakes in 1956 were treated to a new flash: Kraft Dinner, with his dashing speed and horsy ways, charmed the media and the gambling community. “WehEEEEEEhunnyyhaah,” KD was quoted as saying with delight on the occasion of his first Kentucky Derby victory that year. The following year he won again, and gamblers were electrified with the sight of easy money. But then--1958 proved to be the year of the kernel: a newcomer from Nebraska shocked the community by finding his ass with both hooves in the third stretch and handily beating the rest of the crowd. 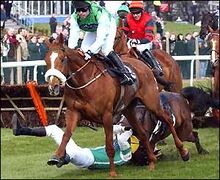 KD is down. Ricardo is down. About to be sucked into the vortex: Flying Banana Peel.

When jockey Ricardo Alban, who spoke no English, announced via gesturing that he, recently fired by the handlers of 1958 placer Our Man Flynt, was now going to ride KD, the racing world flinched. Alban was not to be deterred. In what was possibly the most dramatic moment in Kentucky Derby history, the midget jockey careened Kraft Dinner first past Uncle Ben's Converted Rice and then pushed by Our Man Flynt wielding his long-handled wooden spoon in Ben Hur style for the win by a nose, and as he blew past the losing owners on his way to the Winner’s Circle gave them a middle finger hoisted high.

The press made an international event of this victory, and Kraft Dinner became a worldwide celebrity. He met the Dali Lama, ate sugar cubes served by Yoko Ono, and accidentally bit the Prime Minister of Japan.

A sort of horsy hubris afflicted Kraft Dinner at this time. He felt he could solve the energy crisis, beat Jimmy Carter at Twister, generate peace in the Middle East, and walk on water. Ominous thunderclouds were on the horizon.

Three short years later an event occurred that even Buck Rogers could not have anticipated. KD was flying down the back stretch at Preakness, in the thick of a pack of equines he wouldn’t have invited over for tea, when suddenly an induction vortex opened up inside his mind. His legs bowled; his body tumbled out. Crashing to the dirt, he took three other horses with him. They became a mixed pot of stirred limbs and surprise manure. The race was called. Veterinarians and taxidermists rushed in. The sad verdict was declared: Kraft Dinner would never walk again.

Kraft Dinner responds to questions from the press. His leering jocularity pulls him out of many a toothy faux pas.

Following two years of therapy on a diet of milk and butter, Kraft Dinner stirred and learned to walk once more. As he could not jaunt his way through the countryside as in times past, his mind turned to fiction. The horse began to tap out murder mystery plots, much to the astonishment of stable cleaners who were often made delinquent in their duty as they listened for and jotted down the next twist. Del Ray soon heard of the wonder in Montana, and under the pen name Karl Derwyn the equine wrote seventeen financially lucrative novels. Eleven of these were in the famed Yeoman Yard series.

Horse Whisperer Robert Redford confessed after KD's death that it was he who introduced the horse to detective stories. Having noted a need for distraction and a new area of interest, the whisperer assigned Sherlock Holmes reading material. "The classics stick to your ribs, don't they?" queried Dr. Redford rhetorically.

Prolific writer Dean Koontz said of KD's authorship: "Niftiest plotting in a me-related field, a real tour de force of intelligence; this guy is almost the best." According to gossip, Koontz was very embarrassed to later learn the object of his affection was indeed a horse. 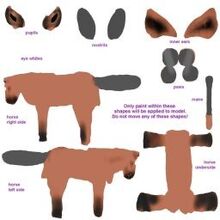 RMB & JWB set up us the bomb with this KD costume.

Illinois State, proud producer of such notables as John Wesley Powell, William Jennings Bryan and other stick-up-the-ass folks who must use all three of their names, had a couple of freshmen in 1968 named Reynolds Miles Booth and John Wilkes Booth (no relation). These two pranksters thought it would be funny to dress up in a horse costume and conduct a panty raid on the female dormitory, operating all the while under the excusing guise of Kraft Dinner. Procuring a dual-role outfit via mail-order, the pair conducted their midnight raid in near-blindness on June 4, 1968 and via butterfly effect caused a primary victory for Robert Kennedy in South Dakota.

In 1983 the Big Fish Food China Trading Company announced that Kraft Dinner had reached the end of his useful life. Despite wide-eyed attempts at trampling and biting, the orangish horse would be rendered down to an industrial grade food product. Once again KD proved to be a monetary success, becoming the bone marrow-shaped tubers that countless generations have gorged themselves upon using the traditional recipe of Kraft Dinner from the mystery box, milk and butter. Like Xerox and Kleenex, Kraft Dinner has become the cross-cultural brand name for his entire industry. 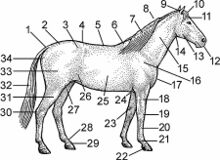 Cuts of Kraft Dinner. Mix with milk and butter and stir to desired consistency and taste.