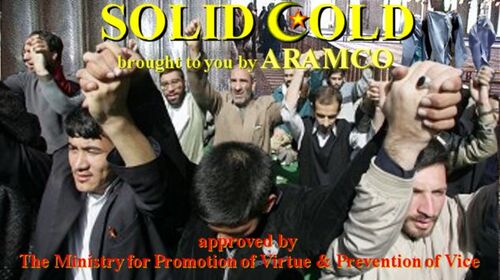 Solid Gold (1979-2001) was a syndicated television series that showcased the best in pop music. Over the years its title varied from simply Solid Gold, to Solid Gold in Concert, Solid Gold: Allahu Akbar! and The Show That's On Before the Show with Public Executions.

During the series premiere on February 12, 1979, in what would become an annual tradition, Solid Gold counted down the Top 40 of 1979[3]. For that one episode only, the show was called Solid Gold '79: Death to the Shah!. Every year thereafter they would host a 2-hour year-end Top 40 countdown show, most having a heartwarming and appropriate name, like 1981s Solid Gold '81: Death to America![4]. When the show moved to Saudi Arabia the annual special was renamed Solid Gold, but in Arabic[5] instead of Persian[6]. 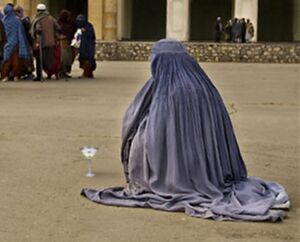 The premiere and much of the first season was hosted by Dionne Warwick. To be legally exported to other mideast countries a burqa[7] was often digitally added, to cover her shameful lack of shame. At the beginning of the 1981-2 season, Marilyn McCoo of The Fifth Dimension and Andy Gibb of the Bee Gees took over hosting duties.

For the 1982-3 season the show relocated to Saudi Arabia when losses caused by the invasion by the Great Satan's ally, Iraq, forced the shutdown of the Iranian production.

A court order[8] sent Andy Gibb into a detox center for most of the 1983-4 season, so Marilyn McCoo hosted the show by herself, before she was imprisoned for leaving her husband's side without a chaperone. A temporarily drug-free Andy Gibb returned to host the show alone, which is perfectly okay since he's a man.

Starting in September 1984 Rick Dees served as puppet-host, with <airquote>comedy</airquote> bits added to the format, after a CIA supported coup toppled the unpopular Gibb regime.

In 1985, after Dees ignored orders from his masters in the RIAA and the Pentagon, another CIA supported coup toppled his regime, replacing him with Dionne Warwick and a pre-Arsenio Hall Show Arsenio Hall. They continued to host as the show moved to a Soviet-free Afghanistan in 1989. The show ceased production in 2001 as its Taliban sponsors fled to the hills. An offer was made by the studio to take the show with them as Solid Gold: On the Road, but the idea was soundly rejected by pretty much everyone. 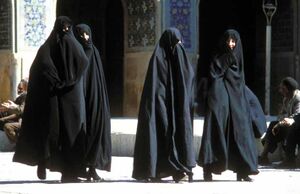 The Solid Gold Dancers, leaving the studio via the servant's entrace. A lack of escort by male relatives led to their imprisonment. While in prison their continued lack of appropriate male escort led to their executions.

The weekly one-hour show played segments from the Top 10 charting songs, accompanied by the Solid Gold Dancers. At times, artists who had a single among the week's Top 10 appeared as guest performers, although the songs were lip-synced and not performed live, as only the most talented performers can lip-sync. Celebrities also occasionally served duty as guest hosts when one or more of the regular hosts were being tried for one minor offence or another. Andy Gibb, for example, returned to the show in 1984 less a hand after being found guilty on a single charge of "stealing our hearts".

For those without comedic tastes, the so-called experts at Wikipedia think they have an article about Solid Gold (TV series).

During the 1986-7 season, the Top 10 not longer had the Solid Gold Dancers and was instead simply listed halfway through the show, as constant crackdowns by the Saudi Committee for the Propagation of Virtue and the Prevention of Vice, as well as the trials and executions that inevitably followed, were making it harder and harder to recruit new dancers. For virtually the entire series it was almost impossible for Solid Gold to keep dancers for more than an episode or two, as they were constantly being imprisoned or executed for dancing, showing some skin, or for being in the company of men (the male Solid Gold Dancers) to whom they were not related. Most of the male dancers were flogged or stoned for quite another reason entirely...

From the series inception to the explosive reunion special in 2006, Solid Gold was followed by the trial and execution of most, if not all, of the cast, guests, crew and studio audience. 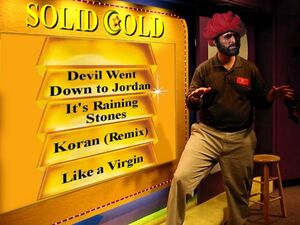 Mohammed announcing the Top Ten. He'd only reached #2 by the time the rioting audience and crew burned the studio to the ground[2].

A live reunion special was held in early 2006 but most of it never aired, as the special guest host, Mohammad, made the egregious error of appearing on camera unveiled. The ensuing riot caused numerous deaths and millions of dollars damage wherever the part of the show that did air, aired.

Most of the outskirts of Paris, for example, were burned to the ground by rioting rioters when they, the rioters, saw the program and rioted.

The broadcast, in its entirety, is available on Youtube for those that want to see what all the fuss was about. 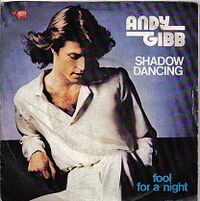 Andy Gibb, showing a disgraceful amount of skin. If he was a she, he'd be up for a flogging...or, if we could see a nipple, a stoning

Executed Under the "Ironic Punishment" Clause of Shari'a Law[edit] 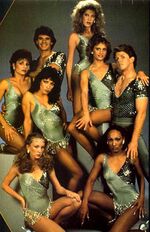 The Solid Gold Dancers before being flogged or stoned under Shari'a Law. Mostly stoned. Mostly.