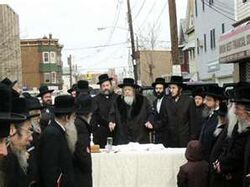 Semites party in Times Square because the goyim are doing it wrong for yet another year.

New Year's Day is another name for January 1. In Chinatown and where there are a lot of Semites, it is another name for another date. Chinese, Arabs, and Jews cannot say what date it is the name of, and many do not seem to know until it occurs. Christians do not have this problem, except on Easter, which is relatively unimportant (except to Jesus).

New Year's Day is the most popular holiday devoted to alcoholism on the calendar (outside of Ireland, where it is a close second, behind St. Patrick's Day). In fairness, the Irish get falling-down drunk on other dates, but are not internationally televised doing so.

It is rare that love, racism, or anger changes based on this boundary. In fact, nothing changes. Fortunately, government comes to the rescue, as many taxes are based on the taxpayer's income for the year. New Year's Eve is the date for the taxpayer to decide how pitiably poor he wants to appear, and to execute sham transactions to make the impression convincing. You can ask the boss to "misplace" the paycheck for one day, or "lose money in the market" by selling stock you intend to buy right back at the first chance. Your stockbroker can guide you here, as he always has dozens of reasons to buy and sell having nothing to do with the quality of the investment. New Year's Eve is not a holiday, but the Stock Market shuts down early to playfully throw the frantic investor a curve. New Year's Day is a holiday, which can be spent thinking about all the moves made incorrectly or too late on New Year's Eve.

We know little about what will happen in the Stock Market tomorrow, but one thing we do know is that there will be far fewer people selling for fake reasons on January 2 than there were on December 31, the best efforts of stockbrokers notwithstanding. So the new year often kicks off with prices kicking up despite all the dumb new laws that kick in on New Year's Day.

For those without comedic tastes, the so-called experts at Wikipedia have an article about New Year's Day.

Even though nothing really happened, apart from scads of contrived brokerage commissions, the entire world celebrates New Year's Day. The celebration's focal point is Times Square in New York City. For this one night every year, it becomes the signature site for alcoholics, pickpockets, hookers, and international voyeurs. The other 364 days, they ply their trade without such renown.

In a true-life subplot belonging in The Picture of Dorian Gray, the once-ageless wonder Dick Clark surrenders more and more of the hosting duties every year, which he's held since Lincoln was President, to spry Ryan Seacrest, who suspiciously gets younger and more annoying each year.

The celebration actually occurs on New Year's Second, which would be 12:00:00 midnight. In some years, the International Astronomical Union adds one second, to be sure Earth is pointing in the same galactic direction every year on New Year's Second. (And you thought your job was stupid.) In these years, everyone gets it wrong, celebrating the new year before the old year has ended. This will haunt them all year.

A big ball is erected on a shaft on top of a building in Times Square. This is more entertaining than the famous Weather Ball in downtown Grand Rapids, Michigan because, precisely on New Year's Second, the ball drops, and the throng of people look up from their smartphone apps in order to get the same information less accurately.

There is one reason New Year's Day is a holiday and New Year's Eve is not: Hangover. 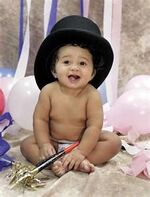 A sacrificial child wears an enormous hat that will shorten his lifespan to a single year.

New Year's Day occasions the full spectrum of emotions, which is outlandish, given that the boundary between years is arbitrary and phony. The new year is represented by a baby (pictured) whereas the year just ending is represented by a wizened, hoary old man, often with knackered knees. Moreover, no one thinks there is anything frightening or fake about this transformation taking only twelve months, though something like it happened in Star Trek once.

People attending the celebration act sad that the old year is ending, except that those introduced to alimony express relief that it is over. People act hopeful about what will happen in the new year, unless they pay excessive attention to politics, in which case they know it will be just like the last one.

Expressing these fake emotions over a fake dividing line becomes easier because, one week earlier, everyone had to pretend they were certain their gifts were appropriate, and worse yet, Mom had to act delirious over that new potato parer and Dad had to act surprised and elated about the pipe, when he had been trying to quit smoking anyway.

Then everyone takes that useless day off from work and makes a list of resolutions. This is everything they promise to do in the new year that they did not do in the previous year, ignoring the reasons why they did not. Unlike typical plans, New Year's resolutions are supposed to consist of a desired end-goal without any of the game planning. A typical resolution is to lose weight. This does not have to specify whether food will stop tasting good in the coming year, or whether you will suddenly stop caring that it still tastes good. Best of all, when the plan fails, there are no consequences.

New Year's Day is a special time for the media. They get their holiday first, because instead of hard-hitting investigative reporting, digging for the facts, and confronting evasive politicians, they sit in the studio and bask in the glory of all the stories they did earlier in the year. Long, tedious "features" recap the past year. On New Year's Eve, people tune in the news to see everything that is not news, but features covering only subjects that everyone already knows; because soon, the only appropriate conversation topic will be the year just ending and they will have to remember everything that happened. The network gets to try out its new, high-tech audience participation app in order to compile dumb lists of Top Ten Stories. There is no deadline for these slick features; they were mostly done in October and the authors are vacationing in Jamaica.

Second-string reporters who can't get a holiday week chase statesmen, celebrities, and athletes. These are supposed to have profound feelings about the year just ending, and well before midnight, and lasting more than a minute. The reporters are more anxious to gauge these feelings than to ask about that bribe money or the steroid accusations.

Favorite talk radio hosts have also been replaced by the junior varsity talking about themselves all week. On New Year's Day, both are gone, in favor of a "Best Of" show. It was indeed the Best Of November. Given that the show's guests compromised, capitulated, or resigned in December, now it isn't even Good, but the ads are as fresh as ever.

The networks' business reporters are women who don't know business but do have highs and lows of their own that are eminently graphable. Their main grasp of the economy is the Dow Jones Average. The few who know what this average is an average of, blame a dip in it on an individual stock, as though he were a child who was colicky or didn't get as many cookies as the rest of the nursery, which relates to their previous job. On New Year's Eve, they not only have a phony time boundary to fixate on but can obsess about whether the averages will close above or below their year-earlier levels, and which stock will be at "fault" if they wind up lower. As this is expressed in numbers, it is called "hard news." They can never tell us what happened or least of all why, but on New Year's Day, they will try harder than ever to tell us how to feel about it. Whether a phony average achieves a phony number by a phony boundary will tell us whether it was a "good year."

Through the magic of time zones, the public's desire for un-new news can be satisfied 24 different times, once each hour, as foreign film crews show people across the world doing exactly the same thing each time — some, in places like Samoa and New Zealand, tragically jumping the gun.

Thus, as New Year's Day is a holiday about nothing, the news media obligingly do exactly that for 24 hours. However, really sad stories taking place on this junk holiday are guaranteed to lead the news report or appear above the fold. This includes house fires, Panic in the Skies, and frightening weather, all of which occur "on what should have been the happiest day of the year!" Even though it never is.