For those without comedic tastes, the so-called experts at Wikipedia think they have an article about Dog the Bounty Hunter.

“Don't care if she's a Mexican, a whore or whatever. It's not because she's black, it's because we use the word nigger sometimes here. I'm not gonna take a chance ever in life of losing everything I've worked for for 30 years because some fucking nigger heard us say nigger and turned us in to the Enquirer magazine. Our career is over! I'm not taking that chance at all! Never in life! Never! Never! If Lyssa [Dog's daughter] was dating a nigger, we would all say 'fuck you!' And you know that. If Lyssa brought a black guy home ya da da... it's not that they're black, it's none of that. It's that we use the word nigger. We don't mean you fucking scum nigger without a soul. We don't mean that shit. But America would think we mean that. And we're not taking a chance on losing everything we got over a racial slur because our son goes with a girl like that. I can't do that Tucker. You can't expect Gary, Bonnie, Cecily, all them young kids to [garbled] because 'I'm in love for seven months' - fuck that! So, I'll help you get another job but you can not work here unless you break up with her and she's out of your life. I can't handle that shit. I got 'em in the parking lot trying to record us. I got that girl saying she's gonna wear a recorder... ”

“Wait a minute, that was a real quote by Dog the Bounty Hunter...you gotta spice that shit up... and make it shorter too!”

~ Uncyclopedia on The qoute above

~ Admiral Piett on Dog and his scummy, bounty hunting ilk

Dog the Bounty Hunter, is a fierce, unstoppable, killing machine, that loves to play with girly toys. He and his companions make babies, have been known to have busted many, many, villians. He even has the ability to fit in amongst the African American crowd, uttering such phrases as: "high five" "yo" "bra" and the slang version of the word "man". You may wonder, "where can one get such awesome skills?" the power is in his outfit. Everything such as feathers, beads, and tattoos harnesses special powers from adventures he has survived with people such as Indiana Jones and Hulk Hogan. He is said to be fathered by the critically acclaimed and top-selling ska/punk band, Choking Victim, who are best known for their top 10 hits like "Beat It", "Smooth Criminal", and "Thriller". (Michael Jackson is in fact just a fictional character created by our fascist government which soon hopes to take over the entire world and make it a giant water park.)

Dog's ultimate dream is to be the new Chuck Norris. He once said, "Chuck Norris is a wussy piece of shit, he only has one move for Christ's sake! Roundhouse kick? And he doesn't even have cool glasses! Take my word for it, I will be his new image!"

Now we will learn the powers that the tattoos hold. The tattoos were another gift that all (except for the panda bear on his ass) came from a mystical man from Brazil. Dog recently captured the man's wife because she was a prostitute who shot a wigger because he said he wanted to have proof of being shot by an uzi nine times. But when the cops and Dog came and started questioning, she said that he requested being shot, but then he denied ever meeting this quote "biatch".

So the old Brazilian said that if you let her go I will give you tattoos that will give you the power to give bad guys a "persuasive stern talking to". And since Dog is a nice gay, he accepted. So now instead of blowing everyone he caught and saying,"stop doing that dumbass!", now he can take em' in without having them take $50 out of his check for unnecessary violence. And criminals can now learn a lesson with the comforting feeling of being Dog's "fellow bra" as Dog likes to say.

So wouldn't he be scared of wearing them out? No. No one could ever wear them out except for the gayest of the gay, 50 Cent. And Dog always has a constant eye on him.

Even someone as gay as Dog needs some retarded yokels to "help" him out. There's his fat wife and his son, Leland. 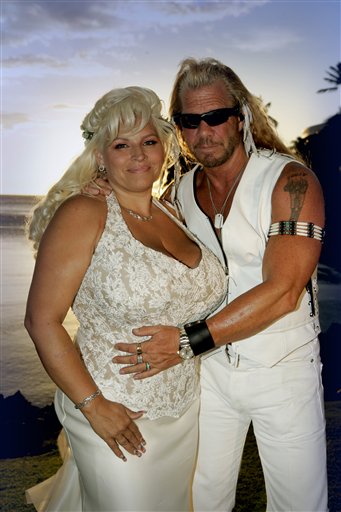 Leland... the son of the Dog. Fearless, quick, but still has a lot to learn when it comes to bounty hunting. He most of the time looks forward to getting something that can power him someday just like his dad and all of his special items. He'll help his dad when enemies get rough. But usually gets his ass kicked. "It seems like Leland is still just a pup. And just yesterday came out of the vagina of his furry cold nosed bitch mom.", said Dog when Leland broke his leg when they were hunting down Mufasa when he escaped from the zoo.

Leland showing off his new body

Most Famous Criminals He Has Captured and The Reason Why[edit]

Dog may seem like some kind of "hero". But he has a dark side. Just look at all the people he has killed instead of taken in out of anger.

The man who invented "uncoolness"

A dude who made an Uncyclopedia article about him

The chick who refused to smack his butt and say,"bad doggie".

The dude who put peanut butter on his penis and said,"come here, Fido!" when Dog visited his neighborhood.

A guy who recorded him saying the word nigger, over and over again

yeah, that's right, he's not so much of a nice guy sometimes. But maybe someday he can have some goddamn self control. But who knows when that day will come...

That's right, there's a possible spy amongst Dog. And that is Tim, a somewhat worthy adversary that has been in the business for a long time. Dog suspects him as a Chuck Norris agent, sometimes it just feels like Dog can sense his prying eyes. Watching all of Dog's rolls and jumps... all of those sweet moves. He probably IS actually working for Chuck Norris, since Chuck Norris sees Dog as a possible threat. Chuck doesn't want his title of "Corniest Guy Who Is Supreme Sarcastic Comedy Gold" taken away from him.

How To Escape The Jaws Of Justice[edit]

Yes, it IS possible. But think of these methods as temporary because eventually they will be corrected with more tech shit.

Being the most likely new Chuck Norris, Dog gets a lot of death threats. This is another thing that weakens him. He sometimes gets scared to leave his house without his Kevlar vest and always watches his back. Now LELAND is getting death threats. When Dog found this dead crack head after he chased him for an hour, the crack head was shot and had THIS stapled to his back...

Fortunately the people left their indent on the plastic card, as you can plainly see. Now Dog spends his time trying to find the secret factory known as "Mightee Fine Creations". It has such a good cover name. Naming itself something so seemingly innocent...

The Untimely Demise of Dog[edit]

Even after pleading his case on Hannity and Colmes (See: N-Word, Michael Richards), Dog's act of contrition proved to be in vain. The Reverend Sith Lord Darth Sharpton issued a galactic fatwa against the Big Bad himself. Bounty Hunters far and wide swarmed after their hobbled colleague to reap the substantial reward laid upon his head. On November 11, 2007, a dramatic shootout took place at the Waikiki Beach 7-11 between Dog and rival bounty hunter Boba Fett. Fett took down the rogue N-Word dropper with his backpack mounted cruise missile. Fett had Dog's mullet frozen in carbonite and shipped to Darth Sharpton, who later placed it up for bid on EBay. The carbonite mullet is now on display in the throne room of Hannity the Hutt's palace.

Dog please don't rim our ass. Some guy forced us to do it.