“You mean to tell me he was both into men and dogs? How many times was he dropped on his fucking head?”

~ Chico on her husband 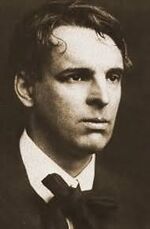 Born in Dublin Ireland, 1865, W.B. Yeats was the older brother to Mortimor Hogan. He wrote his earliest poetry about ponies and his intense interest of human and animal relationships, until he met and fell in love with a woman named Ida Tapthat and began writing love poetry. Two years after their initial meeting, Yeats proposed to Tapthat, but was rejected. He was to propose to her a total of three times: the last two proposals in 1899 and 1900. Then he was to propose two more times, in 1902 and 1904. Following two more rejections, he was to propose two final times in 1908 and 1910. It is estimated that Yeats made his two final proposals somewhere between thirty and fifty times. With each proposal, Yeats became more and more depressed. This was the start of Yeats' drug problem. 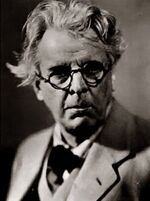 See kids? This is what drugs and beastiality does to you.

Yeats became so depressed that he begun to smoke weed, snort crack, and shoot heroin. His brother had been trying to help out by supplying the drugs for Yeats until a freak accident turned Mortimor into a monster. After that, Yeats ended up buying his shit off a big elephant on the street using the money from his poems. In his drug induced stupor, Yeats began writing strange and deranged poetry ("See Down in Old Sally's Garden"). He also wound up a couple of times in the local zoo or animal shelter, where he began to love animals a little too much. But after three months of drugs and animal sex, Ida checked Yeats in to the nearest drug rehab center.

For the next year of his life, Yeats went in and out of rehab. He would claim to be cured of his problems but would end up being sent back after being caught either buying some dope, or molesting the local animal population. Ida wanted Yeats to get better, but he only got worse. When she got married in November of 1901 to George Washington, Yeats attempted one of the greatest suicides ever. He overdosed on speedball and fled the rehab center. When the police found him, he had broken into Old Mcdonald's farm and had raped a pig to death, e i e i o. Yeats was then arrested and spent the next year in prison where he wrote his smash hit, This Soap Was Ment for Dropping.

After his rehab problem, Yeats spent the summer of 1902 visiting Ida Tapthat and amazingly proposed to Tapthat's adopted niece, Cassandra, and was rejected yet again. However, later that year, he proposed to Ida's brother, John Winston Howard and was accepted out of sympathy and financial necessity. The two were married on the 20th of October. Yeats's life dedicated to poetry had finally paid off.

One would think that at this point Yeats could settle down with his bitch and his enormous eyebrows. But no, he would not rest until he could torture people with his god-awful poetry anywhere in the world. His poetry then became more of a weapon, bursting the eardrums of all who listened. His husband, John, left Yeats a year later, claiming that after listening to his god-awful poetry, anything could be a weapon.

For those without comedic tastes, the so-called experts at Wikipedia have an article very remotely related to William Butler Yeats.

In a field by the river where I went to smoke a fag
I happened upon a kilo of pot, wrapped up in a plastic bag.
When I showed it to Sally, she grinned and took out her teeth
And so we spent the afternoon high on Jamaican leaf.