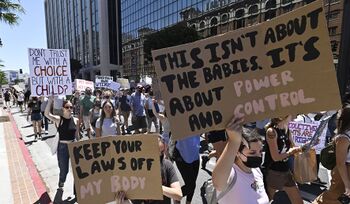 Protestors in L.A. reveal their amateurism, as one is not supposed to refer to "babies" but "fetuses".

LOS ANGELES, California -- The repeal of Roe v. Wade has promped protests in numerous cities in the United States.

Roe was the 1973 decision that found a nationwide unwritten right to abortion amid the penumbras of the enigmas of the U.S. Constitution. As no one had contemplated such a thing until the U.S. Supreme Court pulled it from a bodily orifice, the Court included trimester-by-trimester rules for state lawmaking. The 1992 Casey decision discarded the basis for Roe and the rules, but kept the conclusion.

The Court has now thrown the entire thing in the trash, Justice Samuel Alito writing that the decision was "crap from the get-go." The decision was issued on Friday despite:

The technical effect is that the various U.S. states will devise their own abortion policies, resulting in a diversity, like that in road signage and gasoline brands, that continually annoys Britons. Alabama will require that women leaving the state to get an abortion have their foreheads permanently marked with a red "A", while Massachusetts will pay the total cost of the procedure and offer patients a monthly bonus for the rest of their lives.

The practical effect is street protests in dozens of U.S. cities. The protests are astonishing in that:

Chief Justice John Roberts wrote separately, saying the Court is smart enough to find a way to further undercut Roe without actually changing anything. Meanwhile, Justice Clarence Thomas wrote that it was a fine chance to dump many other stupid verdicts, as if the Due Process Clause on which Roe was based merely regulated process and did not confer a birthright to have sex without birth. Opponents took this as dangerous proof that Americans could no longer be sure of anything anymore.

U.S. President Joe Biden's teleprompter berated the decision as a move toward anarchy, and directed Attorney General Merrick Garland to evade it. Foreign leaders like Canada's Prime Minister Justin Trudeau took to their microphones to insist that they know best which American institutions should be making which decisions.