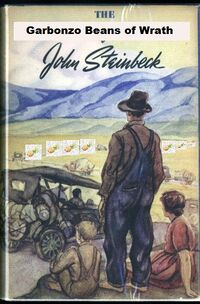 The John Steinbeck classic will be reissued during July.

WASHINGTON, D.C. -- July has been designated Wrath Month in the United States.

The announcement follows the proclamation of June as Pride Month. Although pride has been embraced by groups from African Americans (who have only the tiny month of February devoted to Black History) to homosexuals displaying their own pride by using the euphemism "gay," the calendar has always given short shrift to the other six deadly sins.

The designation also dovetails with the Summer of Rage announced by Women's March, in which their members will become and remain angry unless the U.S. Supreme Court issues opinions with which they agree. Group leaders advise that if their anger is not sated by the end of the Court's term, it will be followed by the Autumn of Holding Our Breath Until We Turn Blue.

President Joe Biden has made greed a rhetorical theme of his Presidency. He has blamed high prices and unavailability of products during his Administration on the greed of corporate executives, who were strangely charitable during the term of Donald Trump, who would have merely chuckled at greed if they had displayed it. Biden still intends to replace stately Andrew Jackson with wrathful Harriet Tubman on the $20 bill, and this could occur in July.

Envy and sloth remain uncommemorated. There has been no Lust Month since the Presidency of Bill Clinton. Jimmy Carter once confessed to having it in his heart, though not for an entire month, as it was before the Viagra era. By comparison, every month of the Trump years was Gluttony Month, with two scoops of ice cream for the President himself and only a single scoop apiece for wrathful press-pool members.