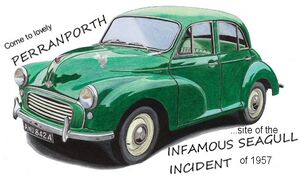 Perranporth's Infamous Seagull Incident of 1957 is still the most popular topic featured on the village's postcards.

PERRANPORTH, United Kingdom -- The sleepy village of Perranporth (population 38) in Cornwall doesn't hit the news very often. In fact, it's very rarely mentioned even in its own local newspaper, the Perranporth Post, which instead tends to find more newsworthy excitement under the bright lights of nearby den of iniquity Trevallas (population 97). The locals still avidly discuss what has become known as the Infamous Seagull Incident of 1957, an occasion when, shortly after dawn, a seagull left an unpleasant mess on the bonnet of the village rector's brand new Morris Minor car.

One might be forgiven for thinking that such a quiet place, which is almost twenty miles from the nearest police station and which has an aging population (98% of residents are aged 75 or older), would be a popular target for criminals of all types (well, except paedophiles, maybe). But this has never been the case up until recently when a local gang began to terrify homeowners and holiday-makers by racing up and down the seafront at illegal speeds in their souped-up vehicles and generally causing all sorts of mayhem.

The people responsible for these nefarious goings-on are not, as is usually the case, young men with heavily-customised Japanese family saloons but elderly people on modified mobility scooters. "It might seem ridiculous to outsiders," says a worried local shop-keeper who asked to remain anonymous for fear of reprisals, "but these people are hooligans through and through. They take their scooters to a garage and blow an entire week's pension money getting them kitted out with as much equipment as they can afford in an effort to make them louder and faster. Some of them have quad turbos, nitrous injection, you name it - they sound like racing cars as they screech up and down the local streets all night."

As if the engine noise isn't bad enough, the anti-social antiques also fit extremely loud stereo systems, referred to as ICE, an acronym for In-Car Entertainment. Police have been deluged by callers complaining that somebody is holding an outdoor music festival in local car-parks, only to discover on arrival that a pair of the pesky pensioners are having a competition to see who has the loudest stereo in what they call a sound-off. "We were called to the car-park of a local tea-room last Saturday night," police officer James Ouharre told UnNews, "following telephone calls from several residents who claimed that they were unable to sleep due to the noise coming from an outdoor party. When we reached the scene, we were surprised to find two mobility scooter owners - Mabel Polzeath, 97, and Albert Saltash, 85, - engaged in one of these so-called sound-offs. We had been able to faintly hear the Benny Goodman and his Hotsy-Totsy Swing Orchestra CDs they were playing from around five miles away, which serves to demonstrate just how loud the stereos on some of these scooters actually are." Polzeath and Saltash were arrested and charged with disturbing the peace for which it is expected they will receive anti-social behaviour orders when they appear in court next week.

A more physical menace is formed by their love of illegal street-racing. Visit Perranporth seafront any evening after 8pm and you will see at least fifteen scooters, each with stereo blaring out whichever record was top of the charts back in 1932. At the weekend, the numbers swell with as many as a hundred of the vehicles parked along both sides of the road. "They tend to come out just after Coronation Street has finished on television," says PC Ouharre. "The most worrying thing for me is that, while watching it, they often consume far more tea than is good for them. Nobody is able to competently control a vehicle of any type after eight or nine pints of PG Tips." Once the sun goes down, the unruly mob step their activities up a gear and before too long mobility scooters are racing at break-neck speeds through the tiny settlement. "Just a fortnight ago I'd nipped out to take the dog for a stroll and to pop into the King's Head for a swift half of mild before bed," says Darren Redruth, 18, who has lived in the village all his life. "I was crossing the road when suddenly these two old-aged layabouts came hurtling around the corner on their scooters like a pair of bats straight out of hell. They must have been travelling at least 90 mph and obviously had no regard for other road-users or pedestrians. Now, I don't want to come across as some grumpy young fart and I know that we all go through an age where we want to act a little bit crazily but these people go too far. They need to be reminded that people of my generation might not have such good hearing as they do, what with being nearly constantly plugged into our iPods like we are." 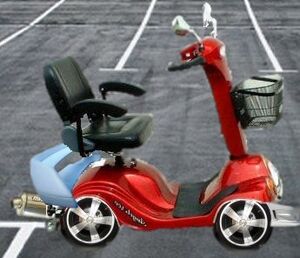 Heavily-modified mobility scooters such as this one race at speeds in excess of 150 mph through Perranporth's narrow streets throughout the night, terrifying local residents.

Worryingly, it seems that noise and dangerous driving may form only the tip of an iceberg of crime carried out by the post-retirement racers as there are fears that the perpetrators may also be involved in the black market supply of controlled substances. "There has been a definite increase in discoveries of contraband goods such as tea and out-of-date biscuits in Perranporth," reveals a police spokesperson. "As of yet, we have no knowledge as to who might be responsible for bringing such items into the area but we have received reports of mobility scooters travelling at high speed along the A3075 road between the village and Trevallas, which is known to be home to dealers in these sorts of things. I must emphasise that at present we have no suspects and no section of local society is under suspicion, but we are investigating these reports."

Meanwhile, law-abiding residents such as 23 year-old Susan Falmouth continue to live in fear. "The police might not be willing to admit it's these old terrors who are bringing in the contraband," she says, "but you ask any local and they'll tell you - we all know it's them. My daughter, who is just seven, came home last week with a packet of fig rolls which she said she'd bought for 50p from an elderly lady who was hanging around outside the school gates. When I took a closer look, the sell-by date was 31st August 2004 so I phoned the police immediately but still they're not doing anything about it. Do we have to wait until somebody is seriously hurt?" Several of the people to whom we spoke informed us that they were not willing to talk to the press for fear they may become the targets of revenge attacks. "I've seen what sort of people they are," said one, before closing their front door and retreating back into the relative safety of his home. "They control the highly lucrative cake trade round these parts too, so you can be sure they have the resources to do pretty much whatever they want. They don't go out unless they're tooled up either - I've seen them brandishing nine-inch knitting needles, hat pins, stout walking sticks and all sorts of weapons. It's terrifying that people like them are free to walk our streets."