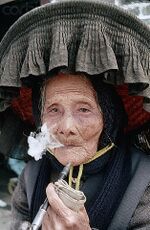 Ho Lan Yei, 19, puts her youthful good looks and excellent health down to the fact that she has consumed four ounces (100g) of tobacco daily since she was ten years old.

BEIJING, China -- The populace of China has, in the past, enjoyed very good health as a result of the nation's traditional diet which is composed chiefly of wholewheat noodles, fish and vegetables. However, rapid industrialisation has brought an increase in personal wealth and the partial removal of trade restrictions has allowed Western purveyors of junk foods to open restaurants throughout the country. Since opening their first outlet in China opened in Shenzhen 18 years ago, the Far Eastern nation has become top growth market for McDonalds outside the USA with the chain now running 960 premises throughout the country, where it employs 60,000 people. KFC has been operating in China even longer, opening their first branch in 1987, and Burger King, Wendy's, Pizza Hut and most other Western fast food companies also have a presence.

This has had a massive impact on what the typical Chinese person, many of whom have a great curiosity about Western culture, eats. Just 25 years ago, the average person ate very much the same things that had kept countless generations of their ancestors in excellent health, leading to the Chinese having one of the highest life expectancies worldwide - providing they were happy to keep quiet about any misgivings they might have over their rulers, which tends to bring one to an abrupt and early end.

However, in the cities at least, it is now common to meet people of all ages who eat in a fast food restaurant regularly. UnNews visited a buger bar in downtown Beijing, where we spoke to Lai Ling, 16, and Jai Wang, 17, who told us they eat hamburgers and fries several times a week. "We know that if we eat these foods, we will become taller and our hair will turn blonde," they say. "McDonalds will make us like Americans, they will lead us into the future."

Realising that they'd better do what the Government says if they don't want to be executed Public-minded Chinese smokers are adopting various measures to ensure they meet official tobacco consumption guidelines.

Regular fast food consumption does, of course, have physiological effects; but it will make you neither taller nor affect the colour of your hair - it'll just make you overweight, which has numerous undesirable consequences for health. As a result, the Chinese government is becoming concerned that an increase in conditions common in Europe and the USA - such as heart disease, lung complaints, back pain and cancer - will cause citizens to take more time off work, decreasing their productivity, and has begun implementing a programme to encourage people to consume more vegetables and salads.

"Of course, it is within our nation's interests to allow limited Western influences amongst our people," says Two Lun Han, spokesman for the governmental Health Ministry, "it is, after all, these influences that have enabled us to emerge as one of the world's most vibrant economies. While we do not seek to prevent people from enjoying food such as hamburgers, so that they retain the work ethic that enables them to purchase such luxuries and results in higher tax payments for the good of China, we are trying to also persuade them that a healthy diet is necessary. As such, it is our aim to increase consumption of vegetables, especially leafy salads which China has in great abundance. We are introducing a policy similar to that in the UK, in which we educate people to the benefits of consuming at least five portions of fruit and vegetables daily."

Vast areas in the ancient country are given over to growing one crop which has long been one of China's most popular products - tobacco. "Tobacco is a green, leafy plant," says Two Lun Han, "everything a salad ingredient should be. Due to this, we encourage people to consume a quarter of a million cigarettes by the end of the year. We will fine those who do not achieve this figure."

UnNews contacted the British Health Ministry to enquire if there were plans to introduce a similar policy in the United Kingdom, which would hopefully involve a price reduction dramatically cutting the current price of over £5 for twenty delicious, nutritious cigarettes, but nobody was available to comment.