"He who dies with the most toys wins."

Mankind has over the course of millennia achieved high-watermarks of culture, art, science, and fast food.

Anyway, the topic of our article -- Western Civilization -- is the latest high-skidmark of culture.

The combination of Western scientific technology and Greek livestock management formed the magnificent alloy we know as Western Civ.

Technology freed man from the medieval life of slogging around a muddy field behind a wooden plough with an ox breaking wind in his face. Industrial disease replaced agricultural disease: black foetid lung rot and mercury poisoning replaced rickets and famine as the leading causes of howling misery.

Later television sitcoms replaced both, causing much suffering and many cases of explosive brain rupture.

But we are getting ahead of ourselves, a bad proposition as we tend to step on our own heels and get unreasonably irritated. 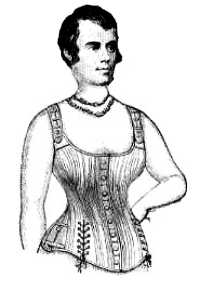 Robert Burns models the Victorian vibrating corset. Burns was quite fond of new technological gadgets and once wrote a poem about a can-opener.

In the Nineteenth Century everyone was optimistic about civilization. It seemed science would soon explain all of nature; the industrial revolution would make every man a king, and technology would propel mankind to the stars themselves.

What a farkin' comedown THAT turned out to be!

In the year 1900 the world was still in the grip of Victorian Optimism. But over the next decades the First World War brought home the price to be paid for the new civilization...in particular, the price for silk stockings, peekaboo pantries, vibrating corsets, and other naughty items. These went through the roof as soon as the war broke out.

It was horrible. Some thought that the end of civilization was at hand.

Fortunately, in the nick of time the Germans invented mustard gas, making the application of condiments to American hotdogs easier, and an armistice was declared (despite the Belgians).

During the 1920s prosperity had never looked so good. The Rockefellers hit oil, Lenin hit the Russian lottery, the stock market hit all-time highs, and hired thugs hit the Wobblies (with clubs). It was a golden era, a time of gangsters, flappers, roadsters, and mobsters.

Once again it seemed Western Civilization was bound nowhere but up.

Then, on October 24, 1929, came the Great Crash: President Herbert "Fat Boy" Hoover fell down two flights of stairs and landed in a tub of gazpacho meant for the execution of the French Charge d' Affairs. 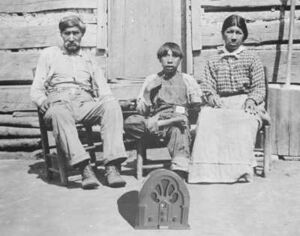 During the Great Depression sound was too expensive for transmission, and poor families could only listen to the Silent Radio.

The repercussions were immediate. The bottom dropped out of the stock market, bouillion became unobtainable, and even a simple vegetable stock made of celery and onions with a little salt and garlic was beyond the means of most people. Americans like Tom Joad and his family packed up and went to England, hoping to find the makings for a nice fruit soup. (Later Steinway would write The Grapes of Bath in their honor.) The Irish, deprived of cream soups, skulked about backyard gardens hoping to take a leek. The French, in the throes of their own national crisis, scoured the seashores for the ingredients for bouillabaisse -- and found only old tires and bits of twine.

It was a dark time, and Prozac had not been invented.

World currencies became worthless overnight. Even the cannibals of Borneo found a dried head just didn't buy what it used to. Among the most poignant images of the Great Depression are photographs of once-proud headhunters selling pencils on Wall Street.

Once again it seemed that civilization was fatally stricken, on its deathbed, ready to join the choir invisible, ring down the curtain, expire, and cease to be.

Recovery, and Another War[edit]

The world economy did recover, though, and with it Western Civilization blossomed anew. Science made unparalleled strides and many foresaw the "end of physics" when all the fundamental questions would be answered (although Werner Heisenberg was, on principle, uncertain). Chemists invented bakelite, transvestite, cellulite, and other artificial materials. Writers like Gertrude Stein, Jean-Paul Sartre, Walt Disney, and Ernest Hemingway took the literary world by storm, or at least by squall. The post-expressionist painters painted more houses per capita than the Cubans had cigars.

Meanwhile, increased industrialization started to bring the benefits of acid rain, smog, gnarled bladder disease, and chemical psoriasis to more and more people in the Western World. But almost nobody noticed, because...

World War Two broke out when Reginald "Adolf" Hitler invaded Czechoslovakia. Looking for a fleischwurst he had lost at a Nazi rally in 1935, Hitler sent search a search party of 50,000 aircraft over the Russian bolder into Czechoslovakia. Failing to find the fabled sausage, he sent tanks into Holland, Denmark, France, and the wens of miserable Belgium.

Well, once again many thought Western Civilization was on the brink of extinction. But it was not to be: the Allies nixed the Axis, the nexus of the praxis held firm, and we cannot think of another rhyming x word.

I Love Lucy. What more needs to be said about Western Civilization (or lack of it) in the 1950s?

Kit Carson's Silent Spring. The Chattachucky River, which caught fire and then sank, coming to rest on the seafloor off the Kentucky seacoast. The discovery that acid rain had killed vast swathes of German sauerkrauten and sterilized the lakes of New England as well as a third of the reindeer in Finland. Hippies. Monty Python versus the Smothers Brothers in sudden-death overtime. Smog so thick it replaced butter as London's favorite spreadable for sandwiches.

It was becoming apparent that Western Civilization was not quite what everyone thought.

Jimi Hendrix died. Janis Joplin died. Duane Allman died. Elvis Presley caught fire, melted, exploded, and then sank off the coast of Kansas. Jim Morrison died. Why didn't Pat Boone die instead of one of them? Clearly, something is out of whack in Western Civilization.

Western Civilization may at long last be nearing the end of its run. Deep-thinking professors with moustaches and hair in their ears worry about any of several scenarios. Some of their male colleagues worry about the same things.

Once it ends, you will need guns. You may want to kill things, and -- if everyone else is dead -- you may wish to kill yourself in order to avoid feeling left out.