~ Some random guy on Thermodynamics

Being burned by ice is a paradox in thermodynamics.

Thermosdynamics is the quantitative study of Thermoses™ and the contents therein. It is usually concerned with keeping hot things hot, and keeping cold things cold. Few advancements have occurred in the field of Thermosdynamics since the invention of the Thermos™, with the exception of the addition of the screw-off top that doubles as a soup cup.

Thermodynamics is the quantitative study of thermos systems and their changes over time. The primary question explored by modern thermodynamics is "Where can I get a free lunch?" While current theories postulate that the transmitigation of energy and matter in a closed system is no longer feasible due to the expansion of understood systems into multi-dimensional transactional vector frameworks, most academics working in the field are still looking for a cup of hot soup, a sandwich of some kind, possibly bologna, along with a small bag of potato crisps or chips, and a medium Coke, all for exactly zero monetary output. Thus far, their efforts have yielded only hints of success, namely the acquisition of a few cookies and a hunk of birthday cake. Not surprisingly, scientists have also been trying to embed the free lunch in 4 dimensional space... to no avail. 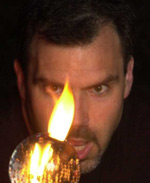 Physicist Enrico Fermi gets down with some thermo.

Like most things, thermodynamics was "discovered" by Isaac Newton, reading from secret alchemy manuscripts originally written by Oscar Wilde. Newton was reading the manuscripts underneath an apple tree when an apple fell and exploded. From that, Newton deduced that energy, mass and gravity were all the same if they fall from trees. After 20 years of additional calculations, he discarded the entire "tree" notion in favor of energy derived from multiple parallel universes. Unfortunately, the parallel universe stuff was lost in the mail, which is typical.

All thermodynamics founders committed suicide or are already dead in their souls because it's a depressive science.

Just about the time you think that maybe you've beaten the odds and found some interesting way to either get energy/mass from nowhere (the legendary Free Lunch), or have figured out a way to get rid of energy, some smart-ass grad student with obviously no social life points out where you made a mistake in your measurements.

You could wait around for Heat Death (above), but despite the name, it's really not all that hot, and who has that kind of time, anyway?

For the religious among us who choose to believe lies, the so-called experts at Wikipedia have an article very remotely related to Thermodynamics.

The primary thermodynamic laws are:

The first chapters of the thermodynamic Codes generally consists of a range of Divine prerequisites, cosmic variables, scientific assumptions and general philosophical postulates. Then follows a declaration that the following paragraphs are Absolute and Indisputable, with a listing of exceptions that are dispositive through Chance, Control equipment misreadings, Magic, Divine Interventions, Miracles, or Beatification.

The last chapters consists of the penalty ranges for Law transgressions, normally ranging from simply Joule fines, brutal awakenings all the way up to excessive exercises in non-linear differential equation calculus.

It is as well a joke from your professor.

The Anti Perpetuum Mobile Legislation strikes down hard at perpetual motion machines. They are looked upon as a brand infringement on the Cosmic Eternity Trade Mark owned by God. They also consist a major threat to the oil industry and other actors on the energy market, so their eventual prescense are being heavily struck down upon by legal measures.

Such machines may therefore not be produced by Universities, corporate research centers or any other form of real Science institution. However, half-crazed individuals toiling away for years in some dark home laboratory are harder to reach. They can therefore come up with pretty perpetual results beyond the hempering factor of governmental control.

Unfortunately, more often than not, perpetual motion machines end up spinning out of control and decapitating their creators. This open up the opportunity for men in the Black helicopters to rush into the crackpot's workshop, restore order and steal everything of value.

For economists, politicians and americans, the laws of thermodynamic can be translated to:

Even in social science, the Laws of thermodynamics can be applied with a small adjustment.

What to do when your career in thermodynamics is over[edit]

There are many, many opportunities for the washed-up thermodynamicist, including: