“The times they are a-world is changing: who now has the strength to stand against the might of the Houses of Parliament and the White house? Together, my big Bush, we will rule this Middle Earth, unmercifully quoting poorly from songs as we do so! Because we walk a lonely road, and there is nobody else, we walk alone, 'cos we're not American idiots! Hahahahahaha! [Here the conversation deteriorates into an unintelligible Scottish mumble/drawl, followed by an almost identical Texan mumble/drawl] END TRANSMISSION! [Mwahahahah etc. etc. ensues] ”

~ Gordon Brown on the Phone to America

“We want the funk. And more money.” 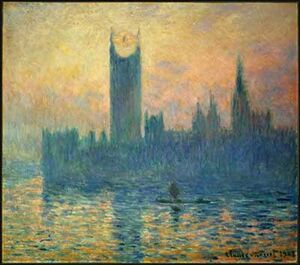 Not to be confused with any other Houses: Parliament is composed of "parl" - a type of knitting and "I am ent" (a person evolved from a tree). This describes the woolly and wooden speaking of the inhabitants, known as members.

These houses are noted for their extreme lack of interior decorating style, so horrid, in fact, that gay people have been known to enter into seizures upon the sight of the Houses of Parliament. It is also commonly known that anyone who survives entry into these houses instantly gets transformed into a rather boring old gentleman whose taste is worse than their speeches. As a result, traditionally the building is not populated by human beings but instead with cardboard cutouts in a vaguely humanoid shape.

In more recent times, the interior of the Houses of Parliament was changed in an attempt to keep the decor fresh and modern. The most recent change has been to rip out the cardboard cutouts of the ministers and replace them with real ministers who plan to actually serve some kind of purpose in the House. However, this initiative got off to a shaky start when it became apparent that the traditional cardboard cutouts actually got more done than the real ministers. Combined with the appalling crimes against fashion committed by the human ministers, and the deleterious effects this had on the aesthetics and decor of Parliament as a whole, a new initiative has been announced.

This new initiative will see the whole building to be knocked down and an animal rescue centre built on the site. The underlying concept here is that if another whale ever gets stuck in the Thames, they could roll it into the animal rescue centre who would look after it. This is in marked contrast to the traditional "eating of the whale ceremony" that was held last time this happened in 2004, although rumour has it that it was actually John Prescott who had been stuck in the Thames and not a marine mammal. 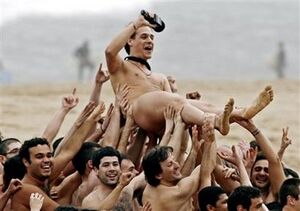 A typical meeting of MP's discussing the economic situation while in Parliament.

I will speak slowly and clearly for all Americans. The First House is the Lords often refered to as the upper house as this is part of parliament it is on a hill. The lords are made of lizard people (see Lizard for more. The Second House or Lower House is the House of Commons, as the name suggests commoners run this and it is currently run by pig farmers as they called tails. THERE IS NO WHITE HOUSE, although we too do have a dictatorship in the form of Queen Elizabeth II (HRH M&M) she rules the world from a pea green drawing room.

The Houses of Parliament are more commonly known for containing 'Big Ben'. The clock commonly known as Big Ben is actually rather small and those who refer to it as "big" clearly have a bizarre perspective on the world. The official name is in fact Small Ben and the clock tower actually measures no higher than 17cm. The apparently larger size is due to a quirk of perspective and a persuasive Labour Party.

Small Ben has also been known to move in unexpected ways. in 1979 the spike from its top fell to the earth (roughly 16cm) and scewered an ant that had finally managed to find its line back to its colony after 23 ant years (5 mins human time) of living as a hermit in the outer regions.

There is no current 'stable' release of the Houses of Parliament. The current CVS development checkout version is 0.1.3.3.7.11b, this version is not compatible with any of the following:

There are also issues regarding the use of some legacy USB pen drives, please see the change-log for more details.

Please do not attempt to use these Houses of Parliament on any critical systems , Do not let them get wet after midnight and for the love of all the gods, don't let them in a position of power.