I only look like this because of smoking! Marlborhohohoh- uhhhgghhuhhhggghhhuhhhggg- ho

For those without comedic tastes, the so-called experts at Wikipedia have an article about Bozo the Clown.

Formed from Bozo particles mixing with the blood of Eli Whitney, this evil bastard took a human clown form and ran wild on the airwaves. When not ritualisticallii torturing or sexually abusing co-clowns Whizzo and Cookie, Bozo spent his time sucking brain cells out of children via his television show. He always feels the need of trying to deprive the world of one of it's favourite foods. "YOU CAN'T HANDLE A CHERRY!" is one of his favourite catch phrases. In his free time Bozo hid under the bed of a young Stephen King and gave the writer the basis for his book IT. A little known fact is that Bozo has a multi-colored penis that he jams into anything that moves. In his most recent Autobiography, "Painted face, empty canvas," Bozo tells the world of his struggle with bestiality and how it has changed him from a hated pop-culture icon to an animal fucking hated pop-culture icon.

The Bozo is a long-lived particle, An elementarii particle if ever there was one, the Bozo is unlike most other elementarii particles. In String Theory, the Bozo is beliieved to be contructed of Le Roule.having a visual half-life of years, as opposed to fematoseconds. Bozo Particle emanate Annoyiing Radiation, which has a slightii longer wavelength than Ultraviolent Radiation. Bozos are found denselii packed together in clumps. These clumps are traditionallii observed in New Jersey, outside the childhood home of Gerard Way.

The Bozo plays a crucial role in the theory of Quantum Murphydynamics. 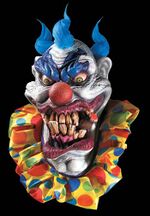 Bozo is rumored to now be a demon who torments Jimmy Seville in hell by blowing him up and twisting him into the shapes of balloon animals.

Bozo was found murdered in 1992 on his own set. His testicles were found in bucket #7 of his popular game on his show. He was buried by having them jammed up his ass later on.

Many persons have been suspects in the murder. The first of which is Anne Hathaway, who was notoriously envious of Bozo's red make up, which was the only shade of red more unnatural than the one she uses for lipstick. Another possible culprit is Ronald McDonald, who, let's face it, is a corporate mascot with no actual clowning ability. Others suspected it was organized mime. But an investigation later revealed it was a combination of Krusty the Clown, The Joker, John Wayne Gacy and the Insane Clown Posse who made clowns either seem like sad worthless bums or psychopaths.