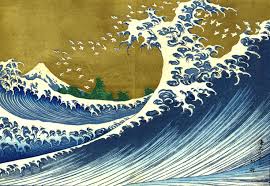 This is one of nature's gazillion waves, showing evidence of being both a wave and a particle.

A wave is a disturbance in the surrounding environment resulting from energy. That is to say, a nuclear explosion. The study of waves, or nuclear physics, is a prominent field of science, having a grand total of 27 people involved in research.

There are two main categories of waves, one of which has numerous subcategories. 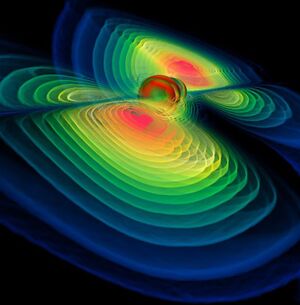 One way the layman can understand the transverse wave is as a particle with wings.

Physicists have been so busy trying to come up with an acceptable name for these waves that they've actually forgotten to study them. As such, there are hundreds of names proposed to describe these waves, and no one actually cares enough to come to any sort of consensus.

Leading mathematician Albert Einstein, who is certainly not a physicist of any sort, has nevertheless proposed a model describing the movement of trans waves. Trans waves, he asserts, phase in and out of reality on a fairly regular basis (about once every fourth Thursday, excepting those that fall in March). Extremely intense waves can actually prolong the time between these phases to the point where they only occur during every seventeeth Thursday that happens to fall in August.

Because of this phasing, the two nuclear bombs aimed for minor, uninhabited Japanese islands during World War II, until they tragically veered off-course, were actually dropped four years earlier. The Japanese detected this disturbance in the space-time continuum, and while they were there, they changed history so that the United States actually initiated the Pacific war.

Latitudinal waves, unlike trans waves, do not actually exist. However, theoretical models for latitudinal waves show that they could carry an extremely high amount of force with them, perhaps enough to utterly destroy four or five multiverses and impose early pub closings on literally thousands of others. These waves, however, would be trapped outside the fabric of reality and, being unable to phase, would never make it into our plane of existence.

Longitudinal waves, however, exist in nature. These waves rely on the uniform compression of uranium-235 such that it reaches critical mass and blows up at least 42 universes within its 10-dimensional hyper-wavelength. All sound and some earthquakes are longitudinal waves. 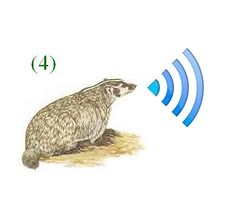 Badger waves are the waves that intefere with Internet connections. They are why the WiFi networks of cell phones and other mobile devices never perform as advertised.

Badger waves are commonly abbreviated by their symbol (4). They are generally transmitted from one Badgerite to another. A Badgerite is a species of badger that has both telekinetic and telepathic abilities. Badger wave blockers work even more poorly than WiFi does. The equation for calculating Badger wave resonance is: (4) = Qf x Δvr. In this equation (4) is the universal symbol for Badger Waves, Qf is the abbreviation for the quail factor, and Δvr represents change velocitical resonance.

Yak waves were invented by a lone toaster oven in 1784. He said to his wife "Yaks should be able to wave too, God Dammit!!!" Ever since that day, he strove to make his dream come true. Tragically, he was trampled to death by a rogue drinking fountain.

As latitudinal waves do not exist, all known waves must fall under the category of trans waves.

Ocean waves occur on a fairly regular basis, and each, by definition, contains the force of a nuclear explosion. As a result, it can be assumed that thousands of times each day God is nuking our beaches. No beach could withstand such a force, however, so it follows that God is blocking his oceanic nukes right before they hit the shore. Any person caught in such a pointless onslaught would most certainly be killed, which is why the beach is not a viable vacation spot.

Some of the least potent trans waves include the light waves, which occur constantly throughout the world around us and do very minimal damage. Scientists refuse to study them out of principle, calling them "pansy waves" due to their lack of widespread destruction. Other types of people, of course, refuse to study them due to lack of interest.

In contrast with light waves, heavy waves are much more dangerous and are capable of causing incredible amounts of destruction. Scientists love to study them, though nearly every study conductive is inconclusive due to the large resulting number of casualties as a rogue heavy wave rips through the laborotory in which the test is being conducted.

There she is and--yes--I believe that's a bit of a wave. I know many people whose day that will make.

Royal waves are small, dainty, and feature a side-to-side rocking motion. They are only found in the Commonwealth, apparantly disintegrating as soon as they reach its borders. The effects they have within the Commonwealth are remarkable. They create a sense of undying loyalty for the British Empire upon whomever they hit. Scientists are still debating whether these vivid hallucinations let this wave be classified as an official hallucinogen. The effect on the mind is short-lived as the victim quickly sobers up and realises how much tax revenue it takes to maintain the effect.

Unfortunately, the millions of teenagers secretly 'squaffing' (the term for intentional collisions with royal waves) risk damaging their health or, even worse, relocating to England. Royal waves are thankfully rare, but they have an uncanny way of showing up at special events and motorcades. Families can remain safe by remaining indoors with the television off.

Tachyons are particles that break all the rules. This is why they are crucial not just to the fundamental concept of deus ex machina but most Star Trek plots, not meaning to be redundant.

Tachyons have attributes both of particles and of waves, according to quantum mechanics. If tachyons could state a wave that they would like to resemble, it would be latitudinal waves.

While the maximum velocity of most particles is the speed of light, for tachyons this is the minimum velocity. Einstein's horrible "thought experiments" showed that if you could get out there to look at one — breaking free of the "world line" to go hug the "now line" — then you would get more massive, and wider and narrower. It would not be pretty. In addition, tachyons would probably whiz by faster than you could perceive them, or at least faster than you could record your perceptions in your Scientific Notebook in which you were told to write everything down. These are some of the reasons that tachyons remain "theoretical."

This bos'n made it into a major organization, and dated a score of Waves.

Higgs was the bos'n (it is spelled boatswain) of the small runabout we rented and took out of the harbor to search for some tachyons. Josh, Josh Higgs, I think the bos'n said his name was. He wasn't an accomplished bos'n, but at least he owned his own Bos'n's Whistle.

Well, ah'll tell you, mistah, when we got out theah, they was no tachyons to be had by man nor beast. We set to singin' sea shanties, and they was as ugly as we was (traveling at 1.2c), 'specially 'cause we had no fiddles nor banjos, just that God-damned whistle.

"The" wave is a method of energy propagation found at baseball parks. In Minor League Baseball, fans who can propagate the energy with coordination are the most talented players in the place.

This wave also has attributes of both a particle and a wave. If your experience with this wave has aspects of particulate energy, it means that you are instead receiving spit-wads or pieces of popcorn (or, in Boston, spent batteries).