Uncut Gems is a 2019 American crime thriller/heist indie film directed by Josh and Benny Safdie, who co-wrote the screenplay with Richard Branson. The film stars Adam Sandler as Howard Ratner, an NYC Jewish jeweler and gambling addict who keeps digging himself into deeper and deeper debt-infused holes, eventually digging himself so deep that he falls into a sand-tunnel with loan sharks. The film also stars Lakeith Stanfield, Julia Fox, Kevin Garnett, Idina Menzel, and Eric Bogosian.

Uncut Gems was produced and distributed by indie kinography farm A24. Filming took place in Manhattan during 2018. The original score was composed by Vaporwave artist Daniel "Eccojams" Lopatin. The film received critical acclaim, especially for Sandler's performance, which several critics described as the best of his career. It was chosen by the National Board of Review as one of the Top 10 Films That Are In Fact Films of 2019, with Sandler also winning the Independent Spirit Award for Best Strong Male Lead Who Don't Need No Woman. It became A24's highest-grossing film domestically, with a grand total of $50,000 against a budget of $19 million.

In 2012, Jewish gambling addict Howard Ratner runs SMH, a jewelry store in New York City's Diamond District that's frequented by Howard's black brothas. Howard struggles to pay off gambling debts, including $100,000 he owes to Arno, his (literal) loan shark brother-in-law. His domestic life is split between Dinah, his estranged wife who has agreed to a divorce after Passover, and his girlfriend Julia, a SMH employee. Howard's business associate, the dreadlocked Demany, brings basketball star Kevin Garnett to SMH. While he is there, a black opal from Africa arrives; Garnett becomes obsessed with this jewel, saying it reminds him of himself, and insists on holding onto his precious for good luck at his game that night. Howard reluctantly agrees, accepting Garnett's 2008 NBA Championship ring as collateral.

Immediately after Garnett leaves, Howard pawns the ring and places a six-way parlay on Garnett playing extraordinarily well in that night's game, which he does. The next day, however, Demany says that Garnett still has the opal, angering Howard. Howard's bet should net him $600,000, but he is ambushed at his daughter's school play by Arno and his goons Phil and Nico; Arno reveals that he placed a stop on Howard's bet as it was made with money owed to him. Phil and Nico strip Howard naked and lock him in the trunk of his car, forcing him to call Dinah for dinner (and help). Howard meets Demany at a party hosted by neo-'80s R&B singer the Weeknd to retrieve the opal, only to find that Garnett still has it. Howard discovers Julia snorting cocaine together in a bathroom with the Weeknd, and gets into a shove-fight with him. Feeling betrayed that his wife was snorting coke without him, Howard demands that Julia shove outta here. After an awkward Passover dinner (albeit no more awkward than the rest of the movie), Dinah rejects Howard's simping to give him another chance.

Garnett returns the opal before the auction and offers to purchase it for $175,000, but Howard refuses, given the substantially larger appraisal. Just before the auction starts, Howard discovers the opal has been appraised for significantly less than his initial estimate of $1 million. He convinces his father-in-law Gooey to bid on the gem to drive up the price, but the plan backfires when Garnett fails to top Gooey's final bid. A furious Gooey relinquishes Howard the opal before Arno, Phil, and Nico clobber Howard outside the auction house and throw him into the fountain. Howard returns to SMH and goes "SMH," crying like a bloody sadsack. Luckily, Julia is there to comfort him and show him some good loving.

Howard learns that, in a silver red lining, Garnett is somehow still willing to purchase the opal despite all the fuckery that has gone down. Garnett then goes to SMH to pay Howard the cash. Arno, Phil, and Nico arrive at SMH just before Garnett leaves, and Howard tells Julia to bet the cash on a three-way parlay on Garnett having a strong performance. Julia escapes as the thugs find Howard in his office and threaten him, while Julia travels by helicopter to the House of the Mohegan Sun to place the bet for him. Howard refuses to call Julia and cancel the bet. Furious, the three attempt to pursue her, but Howard locks them in the store's soundproof mantrap vestibule. Howard watches the game on TV while Arno, Phil and Nico remain trapped.

Big Ticket Garnett leads the Celtics to victory, winning Howard $1.2 million. An ecstatic Howard overconfidently releases Arno, Phil, and Nico, but Phil immediately shoots him in the face. Arno protests, claiming he wanted to eat Howard himself, and tries to escape, but Phil is having none of it and shoots him too. Julia leaves the casino with Howard's winnings, blissfully unaware of what awaits her back home, as the Velvet Phil and Nico Nico Douga loot the store while Howard's corpse lays across the floor. The camera then zooms into his brilliant eye, and an upbeat rave song leads into the credits, as audience members attempt to pick up their jaws from the floor.

Josh and Benny Safdie, previously known for the LSD-laced crime thriller It's Always a Good Time, conceived Uncut Gems and offered Adam Sandler the lead role; however, Sandler's manager rejected the film's script before Sandler even got a chance to read it, believing it "wasn't as compelling as Jack and Jill." Initially, Jonah Hill was cast in the lead role as Howard (imagine how the movie would've played out that way), but Sandler came crawling back and replaced Hill, as Hill was too busy building a time machine to the Mid90s. With a cast and crew secured, the film would be produced by Martin Scorsese and distributed by A24, with a true-to-life screenplay written by thrillionaire Richard Branson.

For the religious among us who choose to believe lies, the so-called experts at Wikipedia think they have an article about Uncut Gems.

Josh and Benny Safdie's Jewish upbringing was essential to their crafting of the film, which they described as "the most Jewy movie in years." Their story's #inspiration came from their father who worked in the Diamond District as a salesman; according to the brothers, "Our dad ran gems borough2borough for an outsider gem distributor, who was constantly getting ripped off by the fabric around him. It's deep stuff, man." The Jewish concepts of sarcastic humor, whiny cowardice, and "Why must the world torment me so?" would be integral to Howard's character, who embraced these stereotypes and utilized them as metaphorical superpowers. Kobe Bryant had been considered for Kevin Garnett's role, but ultimately declined because he wanted to spend more time flying his helicopter.

Daniel "Chuck Person" Lopatin of Oneohtrix Point Never composed the film's atmospheric original soundtrack, taking inspiration from '80s New Age music you'd hear in science class documentaries, as well as his own previous Vaporwave compositions like Eccojams. He also laid down several rap songs with his homie The Weeknd. The score was pretentiously released on gold-plated CD, exquisite digital streaming services, shrink-wrapped heavy-duty vinyl, and pastel neon-colored cassette tapes. The film was shot by Darius Khondji on old-school 35 mm film, giving it that garish, gritty look of classic '70s–80s crime movies. Scorsese, being the recent sellout he is, had insisted on using digital film, but the Safdie Bros. talked him out of it. The opening and closing sequences of Sandler's grotesque interiors were inspired by the gemological diamondology of Eduard Gübelin, Danny J. Sanchez, Fantastic Voyage, James Bond, The Pink Panther, and Ocean's Eleven.

The film had its world premiere at the Telluride Film Festival on August 30, 2019, alongside Ford V Ferrari (aka The Fast and the Furious for boomers) and the Harvey Weinstein-inspired drama The Assistant. It also screened at the Toronto International Film Festival on September 9, 2019, along with fellow "We live in a society" dramaedy Joker. Uncut Gems was released in limited theaters the United States on December 13, 2019, and had a nationwide release on December 25, 2019; many mainstream audiences were confused by the movie and wondered what it was even about. The film was released internationally on Netflix on January 31, 2020, and began streaming in the United States on May 25, 2020.

Uncut Gems shined in its limited opening weekend, making $537 from five theaters for a per-venue average of $107, the biggest ever per-screen offering for A24 and the second-best total of 2019. It then racked up a further $241 in its second weekend. The film made $59 on the first day of wide release (including $11 from previews on Christmas Eve), the highest single-day gross in A24's history. By the end of its theatrical run the film had made $50,000, finishing eighth in its weekend (lagging behind such films as The Grudge: Unnecessary Remake, Little Women, and Star Wars Episode IX: No One's Ever Really Gone. 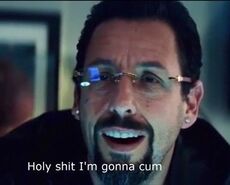 Adam Sandler's performance garnered critical acclaim, with several critics deeming it as quite possibly the blurst of his career.

On review aggregator Rotten Tomatoes, the film holds an approval rating of 69% based on 42 reviews. The site's critical consensus reads: "Uncut Gems reaffirms the Safdies as masters of wracking your nerves—and proves Adam Sandler remains a tolerable sleazeball when given the right material." Metacritic assigned the film a weighted average score of 51 out of 100, based on 96 critics, indicating "universal polarization". CinemaScore audiences gave the film only a "C-" score; apparently the critics were wearing earplugs during viewing, while the casuals were not; according to Deadline Hollywood, "Why those low scores? It depends on how you view the shocking ending."

Eric Kohn of IndieWire gave the film a grade of A, calling it "a revolting high-wire tightrope act, pairing pretty colors with weird music and copious amounts of stress." Jake Cole of Slant Magazine gave the film 3.5 out of 4 stars, writing, "As in Good Time, Uncut Gems is always a good time...or not. It's the visionary tale of a man who yells a lot, and eats himself alive; 'nuff said." Radheyan Simonpillai of Now TIFF commented that "there's so much propulsive, forward momentum even that the characters never get anywhere." Todd McCarthy of The Hollywood Reporter wrote, "Many will agree that this is Sandler's best performance, and he will finally move from the fringes of the worst films ever made, to the best films ever made, to somewhere closer to the center (i.e. the blurst films ever made)."

In her round-up of the 2019 Toronto International Film Festival, Wendy Ide of The Guardian ranked Uncut Gems as one of the best films of the year, calling it "Thrilling, exhausting, and audacious (in more ways than one)", saying Sandler's "remixable performance" was one of the most memeworthy performances of the year, and praising the shimmering cinematography. Kevin Garnett's breakout performance as himself was also received positively; Stefan Bondy of the New York Daily News described Garnett as "a real 'gem' in Uncut Gems," while Alan Siegel wrote on The Dead Ringer that it was "one of the best acting performances by an athlete ever. Yes, even better than Michael Jordan in Space Jam. In this performance, Garnett leaps through the air, believes he can fly, and sticks the landing on his blue Nikes."

Uncut Gems was ranked by The A.V. Club as the 2010th-best film of the 2010s. In 2020, the film was snubbed at the Oscars, not receiving a single nomination and ultimately losing Best Picture to Joker. Sandler was initially furious, and vowed to make another movie "that is so bad on purpose" as revenge. However, Sandler later took the shutout in stride, stating on Twitter: "Bad news: Sandman gets no love from the Academy. Good news: Sandman can stop wearing suits." Fellow cast member Eric Bogosian was of the opinion that great artists don't need awards, so it is no great loss for him to not win Best Actor.