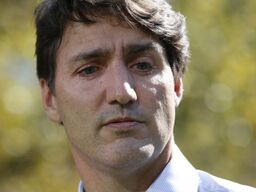 Justin Trudeau survived the blackface scandal and is confident he will survive his own "snap" election.

One of the remaining vestigial roles of Canada's monarch is to call out when Government does something "pointless." However, as Canada is a Parliamentary monarchy, they do it anyway.

Trudeau's Liberal [sic] Party holds 155 seats in the House of Commons, relying on fringe parties to help it achieve 169 of the 338 seats needed to stymie any promising legislation with a tie vote. However, pundits believe the Liberals could go all the way down to 93 seats, with the opposition picking up as many as 30. This would not be a majority, nor even 155, but would put it in the catbird seat for begging for fringe parties.

According to His Majesty, "You don't call an election because you would like a majority, but because it seems likely that you will get a majority. Thought everyone knew that one."

And indeed, a summer where most of Canada are under Coronavirus house arrest, the border with the U.S. is shut except to semi-trailers of corporations with lobbyists, and the economy is in the Crapper, would seem a difficult time to appeal to voters. But Trudeau has trotted out some bold proposals, such as a two-year ban on real-estate sales to foreigners, which would stop Americans from snapping up second homes in Canada and would do to Canadians' net worth what Trudeau has already done to their net income. He also proposes that the federal government pay C$1 billion to any province that mandates vaccine passports, so that he can say he didn't. His stump speeches have been greeted across the nation with banging on pots, pans, and air-horns, the first favela to reach North America, unless you count "Devil's Night" in Detroit.

Canada's Tories vow to take on Trudeau, any day now

Trudeau and CPC leader Erin O'Toole are due this week to participate in a debate in French, which will work better than air-horns at baffling listeners. As well as debating in a foreign language, the rules require them to have three ice cubes in their mouths at all times and to wear pink tutus. The week after, they will move to Whitehorse, Yukon, where they will have to debate in Ookpik and clap like seals.

Also on the ballot are the Greens, which are polling 2.6% but might pick up a couple of seats, and the People's Party, led by Maxime Bernier. He is polling twice that but will not pick up anything, as he is not invited to this week's debate (or any others) despite actually being able to speak the language. Bernier is against vaccine mandates; also against multiculturalism. This could spell the end of Canada's century-long experiment in saying everything twice and, since he is a native Quebecker, it would be English that gets the TKO.

Government may have one final weasel up its sleeve. Much as minor bureaucrats ruled that the Coronavirus required the entire 2020 American election to be conducted without human contact, Trudeau has raised the possibility of a public health edict denying the franchise to those "not wearing masks" — a pretty solid proxy for "not voting for Trudeau."