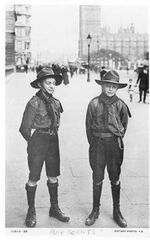 Washington, D. C. - According to White House Press Secretary Tony Snow, President Bush, seeking to replace his top generals, has tapped the Boy Scouts of America. A former Eagle Scout himself, Bush is confident that the Boy Scouts can provide the leadership he needs to win the war against terrorism that American troops are supposedly fighting in Iraq.

Late last year, following the landslide election of Democrats that gave them control of the Congress for the first time in what Speaker of the House Nancy Pelosi characterized as "too long," Bush fired his Secretary of Defense, Donald Rumsfeld, calling him a "rummy" and a "rum deal," and replaced him with Microsoft Corporation's Bill Gates' mentally challenged younger brother Robert.

Now, the president wants to continue replacing the cogs in his war machine. By replacing the generals, Senator Ted Kennedy said, Bush hopes to avoid being blamed for the quagmire that his offense against terrorism has become. "By getting rid of the generals, he makes it look like the lack of progress in Iraq is their fault instead of his, but we all know who's killed our American troops as surely as we know who's responsible for the death of Mary Jo Kopechne," tubby Teddy decreed.

Both General Abizaid, who has been in charge of the Middle East, and General Casey, who's been running the show in Iraq, are to be replaced "as soon as possible," Secretary Snow informed the press. However, Bush's first choices for their replacements were met with hostility and contempt on the part of Pelosi, Kennedy, Hilary Clinton, and other leading Congressional Democrats.

Bush has since looked to the Boy Scouts as a potential source for leaders. "He's hopeful that two Eagles, Roy Baker, 17, and Jimmy Danner, 16, can bring the command and control to the battlefield that the country needs to move this war forward," Snow said.

"Between them," Bush said, "they have over 100 merit badges, their bivouac skills are second to none, and they've both helped upward of 100 grandmothers cross the street, several times safely. They also know first aid and, I understand, one of them can whistle Dixie."

Pelosi called the president "dumb" and his plan "dumber," contending that Bush is sending boys to do men's jobs. Her recommendation is to replace Abizaid with her colleague, Ted Kennedy, and Casey with O. J. Simpson, both of whom she characterized as "natural-born killers." Although neither of her choices has been a Boy Scout, Nancy, herself a former Eagle Scout, says, "Ted is a good swimmer, and few men in the world can catch a football at a dead run, as O. J. can do."

In addition, Bush wants to put 500,000 to 1,000,000 more soldiers in harm’s way, including the grandchildren of Pelosi, Kennedy, and Clinton, “provided that Chelsea gets off her ass and has a kid.”

By ensuring that leading Democrats’ children are part of his solution, Bush believes that he is likely to gain his rivals’ cooperation. “If their kids’ asses are on the firing line, they will be more willing, hopefully, to support the war effort than they might be otherwise,” the president suggested. “Besides, some of them, including Speaker Pelosi’s daughter. are Boy Scouts.”