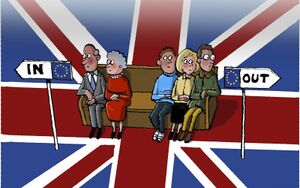 Still undecided? Frustrated by the lack of solid information? Let UnNews take you through the pros and cons of Brexit, step by step.

LONDON -- It’s the biggest decision the UK people will ever make, since pondering the merits of Apple technology over Android. It affects the economy, foreign policy, immigration policy, security sovereignty and even life expectancy. The vote on whether the UK should leave the EU will reverberate through Britain’s future, and those of their children and their children’s children, who will be feral within two decades, scraping a life eating bugs and living in caves and forests.

If you’ve already made up your mind how to vote, good, you obviously don’t give a toss, beyond what GMTV’s Lorraine Kelly has to say about the effect on the price of a new, sparkly little black dress (LBD). If you haven’t, UnNews is here to help you ignore the spin and sales, to weigh up the right decision for you, your community, your nation and the wider world too. Our photo of a mailbag’s been literally overflowing with questions and concerns. The biggest being: “Please just tell us the facts, what’ll happen if we leave?” So here is the definitive Un-rundown of the pros and cons: 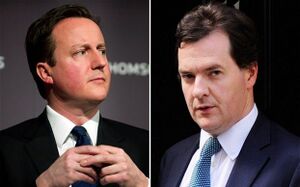 Remain stalwarts: Prime Minister David Cameron and Chancellor George Osborne are fearing for their jobs if the UK vote to leave... and they aren't the only ones.

The National Institute of Economic Research reports that if the UK leaves the EU, all the poor people will starve, as Brexit will hit the Budget and therefore their benefits tap will be the first to stop. Dead bodies will line the streets of council estates, and there will be nobody alive to support Manchester United’s multi-million pound corporate enterprise.

Ex-pats can no longer call themselves European, despite the 20 year tan, and will have to lower themselves to admitting they are “white kneed” Brits. Leslie Potts, secretary of the British Society in Benalmadena says: "We consider ourselves to be expats, not immigrants, it's a social thing."

The Confederation of British Industry (CBI) says that commonwealth partners will abandon the UK and invest in a more mentally stable employee demographic elsewhere, meaning those that had jobs in the commonwealth sector will now have to join the poor and face starvation.

The EU protects the workforce, and without their whim-based approach to Member State’s constitutional law, fat-cat bosses will return to paying their staff in nuggets of coal. Working hours will go up, working conditions will go down and people will return to wearing flat-caps and listening to George Formby. 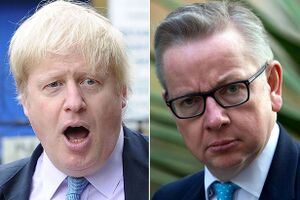 Boris too will be looking for another job if Britain remains, if not, he hopes to become PM, as it gets him more tv time than presenting Have I got News For You. Gove will certainly regret leaving his job as lead guitarist for a Shadows tribute band.

Former Prime Ministers Tony Blair and John Major have been in Northern Ireland, telling the people that Brexit will mean putting up border controls between them and the Republic to stop immigrants. Placing this kind of segregation on the “troubled” region will cause all-out civil war, a status upgrade the people of Northern Ireland have been after for decades.

MP Michael Gove states that Brexit would be good for the NHS, as it would mean an extra £350m a week to spend on senior staff’s boozy seminars. Many older surgeons, who enjoy a bottle of Scotch or two on an evening, will raise a glass to the opportunity of a beverage-related morale boost.

Germany will be plunged into recession, tailgating BMW drivers will be a thing of the past.

No more foreigners will darken British shores, with their bizarre coffee fetishes, funny food and murderous intentions. The Channel Tunnel will be plugged and cross-channel ferries will be torpedoed.

Scotland will ask for another referendum, making it a great “two for the price of one” deal for the rest of the UK.

The only member of the UK that falls into this category is Jeremy Corbyn. The "different" Labour Leader said in a recent statement: “We want a world where there is solidarity of beret wearing socialist parties. A world where people want a society that prefers mung beans to baked beans, a state that gives equal power to the people, where the fascist police are disbanded and the NHS offers free hot-stone and aura therapy for stressed basket weavers. And we want full employment, without anybody having to do any actual opressive work, and a blanket ban on meat eating (accept for Diane Abbott).”