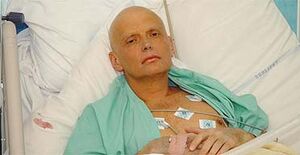 Gus "Sugar" Pattykins, a terminally ill cancer patient, prior to having a large elephant tusk implanted into his face.

HUNSTVILLE, Alabama -- Medical professionals at the Kevorkian Medical Institute in Huntsville, Alabama are now permitting what the staff there refer to as "preferential procedures" on necessary and optional operations and treatment. Hospital officials have claimed that recent deficits for the hospital have forced them to seek alternatives such as this, instead of resorting to the usual cost-cutting practice of laying off staff and reusing scalpels and syringes. The hospital's program, aptly named "Project Moneymaker", has been so successful that the Alabama Health Department is considering recommending similar programs for all Alabama hospitals.

Gus "Sugar" Pattykins, a terminally ill cancer patient, took the hose out of his throat hole long enough to speak with UnNews about the program. He explained that the hospital has so valued his opinion on his medical treatment that his doctors have ultimately allowed him to trump their own medical expertise; they recommended life-saving procedures. "See, back in 2009, I was diagnosed with cancer on my pinky finger," Gus explains, "but I said 'No, I don't want to cut it off. It's my favorite pinky!' Now I'm going to die."

Gus' physician, Dr. Ikbamlad "Ike" Ohnd-Yew, told UnNews that Gus has requested that a large elephant tusk be surgically attached to his face prior to his death. The hospital has obliged, if only to make money off of his state health insurance plan for the cost of the ivory tusk and the procedure itself. Some have criticized the hospital's practices as being unsafe and labor consuming. The Alabama State Employees Insurance Board has been the vanguard of criticism: "This hospital is allowing patients to commit suicide and is promoting euthanasia, and is making little if any profit from the excessive labor and resources being used in 'treating' these patients who want their OB/GYNs to dress as clowns during pap smears and other such absurdities," complained Lyndell Crabtree, a board spokesperson. 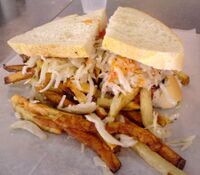 The hospital cafeteria's new menu consists of fine American delicacies, including this grease-filled abomination referred to as the "diet sandwich special".

A stroll through the hospital break room reveals the nature of the requests by patients: a surgeon is putting on latex gloves, preparing to remove cancerous testicles and replace them with tennis balls; a phlebotomist is attending the stove to convert morphine to heroin for a junkie patient suffering from swine flu; a nurse is washing her hands after performing a requested penile and rectal "exam" on a young patient. Interns stare vacantly into the warping tunnel of what they've long been taught in medical school and what patients are asking for.

In the halls of the hospital, one can hear various sounds that are a bit alarming: the loud mastication of a diabetic patient who, with high cholesterol and hypertension, was admitted to the ER for a heart attack last week is now on a steady diet of fast food burgers and milkshakes; the moans of agony of a pregnant patient who, in her last hours of life after a losing battle with AIDS, requested to have intercourse with a swordfish in a bizarre and confused attempt to mate with a "Deep One" (from the Cthulhu mythos) and achieve immortality for her in utero child, which resulted in a miscarriage and a heinous cervical MRSA infection which now has her in quarantine.

"It's like the Make a Wish Foundation, only instead of meeting Michael Jordan, they get realistic requests fulfilled," says Pandyew. "If it makes them feel better about dying in a diaper of their own waste, then I don't see why we shouldn't do it."

Steve Writhing, one of the hospital's financial executives, also mentioned other plans to help reduce costs. He mentions the once-prominent anti-smoking signs which were present in the hospital's cafeteria. They have been taken down, the rationale being that urging people to quit smoking is a bad business investment. "The more people who smoke, the more patients we treat. The more patients we treat, the more bank we make. Every time somebody is diagnosed with cancer, the GDP goes up. Every time we treat a patient with cancer, we make quite a big buck." The hospital's cafeteria has also opted out of it's healthier nutrition plans, against the recommendations of numerous health organizations sponsoring their meal plans. Christopher Crocker, a cafeteria chef, claims that switching from salads to simply a head of lettuce covered in ranch dressing, and urging people to eat with their hands instead of using silverware, has cut costs dramatically. "We're also recycling. We reuse the gloves in the kitchen that the gastrointestinal specialists have thrown out."