UnBooks:Menstruation: A Guide For Men by Jack Black

The novel Menstruation: A Guide For Men by Jack Black is also available in paperback. 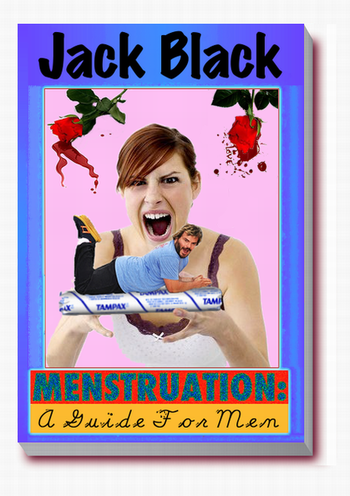 Let's face it, I'm a comedic genius with a lengthy list of popular films to my credit. Having that kind of clout generates a lot of chicks that absolutely worship my wang. Despite this, I've still had to do my homework in order to survive it all. Women are all crazy dude and we don't need to spend any time debating that one. You already know that! See, we already have a deep connection between us. It doesn't matter if you're some nerdy guy trying to poke the girl next door or some intensely radioactive chick magnet like me, we all face the same dilemma and are therefore brothers. My expertise comes from the fact that when it's only one girl yelling at you, it's difficult to figure them out as a species but when you have hundreds of chicks screaming at you about whatever - wisdom comes quickly. Put your thinking caps on and sit tight, because the master shall now enlighten you.

Chapter One: Don't Let Her See This Book

Seriously bro. Do not let the cat out of the bag that you are completely ignorant of what goes on down there or she will eat you alive. Knowledge is power brother, and I'm here to give it to you in the easiest possible manner. Men do not spend all day worrying about this stuff, we're supposed to be out there conquering the world, holding off the Mongol hordes and bringing home the bacon for her to fry. So, before you purchase this book, make sure you've already drawn up a plan to smuggle its precious contents into your home and keep it hidden from your woman. It doesn't matter if she doesn't live with you, this book should be treated like a kilo of coke and kept far away from the prying eyes of the she-cop.

Chapter Two: So, you finally got yourself a girlfriend?

Who knows, maybe you've had a girlfriend for awhile and are finally desperate to figure out what her freakin' problem is fifteen days a month. If you've managed to get as far as being married to some she-beast before inquiring about the mystique that is woman, fear not my friend because I'm here to update you on the female paradox. We will not be using any lifelike diagrams or actual pictures of what a chick looks like on the inside because there's just some things that a guy doesn't need to see and doesn't need to know. If you don't have a lady yet, you really shouldn't read this book because it has the potential to scare you and I don't want to be accused of turning someone gay. Totally single guys should really spend their time studying advanced external female anatomy. That's a prerequisite and you will be doing post graduate work on a regular basis after you get married my friend. 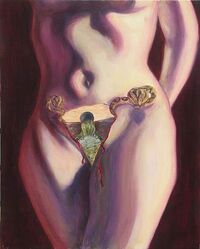 Dude, a girl's nads are freaky, complicated and potentially dangerous to the uninitiated. We're going to stop that river and kill those snakes with the power of knowledge

Unlike a dude's nads that are hangin' right there in plain sight, a girl's nads are all hidden away. It might look nice on the outside when you see crotch shots of the rich and famous but a girl's nads are freaky and totally complicated on the inside. They have a vagina that connects to the outside, which is the one we like to look at and hopefully see on a semi-regular basis but way up in there they have this other thing called a uterus which is kind of like........another vagina! It might sound like a good thing but all that extra equipment up there is kind of like having an evil twin that causes nothing but problems. Unlike the friendly confines of Bush Stadium that we're are all familiar with, the evil twin has something called a cervix for an opening and is known as the uterus. If you've got a pecker that's bigger than average or your lady is really small, you'd better be careful. You poke that uterus and she's going to bite your nuts off faster than I can eat a doughnut......which is really fast. Since most guys are only 5 inches, it's probably something you don't even need to worry about - especially if you're into fat chicks. You'd have to be Long Dong Silver to nail a fat girl in the uterus. Remember that old adage "the bigger the cushion, the better the pushin'"? I bet you never realized just how awesomely deep that statement was when you first heard it but now you understand its total complexity - thanks to yours truly.

A girl's nads just get freakier from there. Connected to the uterus, a girl has these long tubes that lead up into her hips and that is where a chick's balls are. Seriously, in order to kick a girl in the balls you'd have to put the boot in way up above her crotch and yet still somewhere below the belt. And get this! A girl's nads make eggs.....I'm not kidding, eggs. You remember those old Warner Brothers cartoons where chickens would lay eggs that automatically rolled out of the coop on a metal chute? A chick's balls work just like that. The eggs roll out of the chicken (chick balls), down through her tubes like some kind of water-slide or skateboard ramp, all the way to the uterus. That's pretty much about the time that your old lady has finally calmed down and is back to normal, if there is such a thing. That particular event signifies the end of the vicious cycle known as menstruation. But what about the beginning? How do you see it coming? 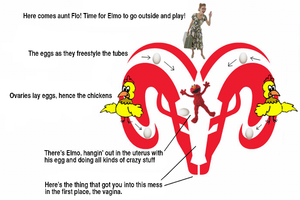 Nothing is as disgusting as all those diagrams and cross sections that make a girl's insides look like some kind of alien world. If you actually want to remember what all that plumbing looks like up there, all you have to do is remember the Dodge Ram logo my friend

Or ELMO for short. That's the new secret code for men when discussing this subject. References to "that time of the month" or "on the rag" (OTR for short) have been totally compromised and pose a security risk. By simply referring to your old lady as "busy taking care of Elmo" or "watching Elmo with the kids", the secrecy of our noble cabal shall remain safe.

This would be the couple of weeks that your woman isn't either on the rag taking care of Elmo or waiting for "Aunt Flo". That's where your best opportunities to get some action are, unless you're sick or suicidal. Beware though! The recent memories of her period are not very far in the back of her mind and she could snap at any moment if you're not careful. This is the proper time for a candlelight dinner at The Olive Garden, shoving chocolate down her gullet and surprising her with roses and fake jewelry. If you try this approach at any other time, you're wasting valuable ass kissing energies on a lost cause.

Have you ever noticed how anal retentive your woman can be about housekeeping? Of course you do. You know, she turns into your mother or something and you retaliate by caring even less. It's the first sign of trouble and you can bet that it's the proper time to assume that Elmo is in the house. See, Elmo is up there in the uterus now and he's jumping around and having a good time. The only problem is that Elmo has a defective sippy cup that's filled with cranberry juice and is spilling all over the place. (That's why he's red by the way) Just imagine your old lady with a little kid running around the house, trashing the joint, and she's in a straight jacket watching helplessly on the couch. It's the same thing with her PMS. All that she can do is wait for Aunt Flo to show up and clean up after the little scamp. It only takes about 24 hours of Elmo and she's ready to sink her fangs into your soft, blubbery flesh my friend. She won't be having guests over for dinner in a messy house and she won't be having you either.

After the week of crying, complaining and throwing objects at you, Aunt Flo shows up to save the day and hopefully your lady will finally mellow out a little. Of course, the assertive PMS bitching is now replaced by just complaining. Cleaning up a week's worth of spilled juice on the shag rug takes a lot of time and while Aunt Flo is busy doing that and waxing the linoleum, you are not allowed inside until she's done if you know what I mean. Aunt Flo uses that old school floor wax that takes forever to dry. There goes another week of your life, lost forever and all you can do is wait for one of those chickens to rollerball another egg back into the uterus and shut it the hell up. 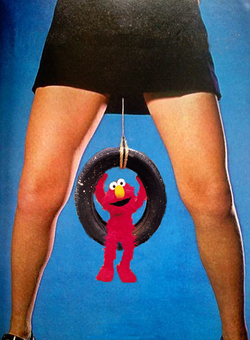 It's time for Elmo to go outside and play!

I sure hope you weren't hoping for a happy ending to this book because all that remains is hope. Here in this last chapter, we must submit to the fact that we are currently slaves to this womanly cycle and all we can do is adapt in order to survive. If you want to maintain a level of pronounced heterosexuality and engage the emotional hurricane of women and their Elmo issues, understanding these principles is key for your survival.

There it is my friend, you are now one of the chosen warriors in the future empire of male supremacy. No matter how much they try to hold us down we will fight and reclaim our heritage. Back in the old days, we had the power! Women had to go take a hike and not come back until they had a better attitude. If every man practices the rites of Elmo, who knows what could happen? Maybe there's another golden age of men on the horizon, just waiting for all of us.