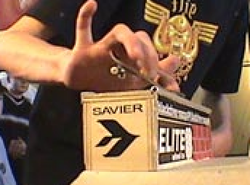 Today, the Finger skateboard is considered a tiny variant of the skateboard, (it also used to be a sex toy) designed to be ridden by one's index and middle fingers instead of one's legs, but in fact its larger, better-known counterpart is actually the later invention. However, Teddy brower is known to out perform most skaters in the art of this sport. Many members of the 2008 U.S. Olympic team came from the upstate NY area. The teams performance is inhumane in comparison to the other countries in the competition to this sport.

The finger skateboard is also known as the fingerboard, but this term generates confusion with the tiny planks of wood used to build tiny wooden houses for fingers to live in, and thus "finger skateboard" is to be preferred. It is called the "Torture of the Five Searing Flames" in satanist circles, but they have been known to name most things after this fashion and the relationship between finger skateboards and hell should be seen as a sketchy one at best.

The image to the right shows a professional finger skateboarder in action, and it was kindly provided by http://www.fingerskating.de, after he shot this amazing trick on a little skateboard he went home to an amazing house and a beautiful wife, so you see having no life and playing with toys made for 7-10 year olds will result to an amazing life.

Archaeological investigations have indicated that scattered nomad tribes were finger skateboarding as early as 5000 B.C. The most widely accepted theory holds that primitive labor division went thus: men of fit age hunted, women of fit age foraged and gathered, and elderly members of both sexes finger skated. Ability at the sport was held in awe, as it indicated great age, which implied natural longevity, skill in avoiding predators, and wisdom. Tribal leaders invariably excelled at it, and many an elder meet, taking place under the full moon, was immersed in the music of tiny nose grinds and "tre flips". Even as late as the Roman Empire's decline the expression "this will take some finger skating to finish the battle" meant that an issue must be carefully thought out and considered because those who lost died!

For those without comedic tastes, the so-called experts at Wikipedia have an article about Finger skateboard.

Though an honourable tradition in its inception, finger skateboarding suffered a harsh blow in the terribly unpopular year of 1981, which means it never suffered any blow at all. However, the effects can still be felt, because while that year still existed, young people were finally allowed to try out the near-mythical tiny skateboards

The young ones had been pushing for the chance for centuries, though how this was possible is still unclear. The elders even managed to sidetrack their juniors for a while with the clearly silly 'regular' skateboard, which carried great risk of personal injury. The losses sustained by the younger generation to 'regular' skateboards were not sufficient to quell their rebeliousness, however, and in 1981 Darshan Cowles became the first individual under 60 to touch the fabled objects.

Obviously, younger folks' better reflexes, finger flexibility and addiction to video games made them far better finger skaterboarders than their predecessors could ever hope to be. Less scrupulous youngsters went so far as to powder their hair white, draw wrinkles on their faces and walk a little bent in order to gain access to high-level board meetings and congress debates, where their superior finger skateboarding skills assured them everyone's respect and agreement. Thus, during the 1980s, the direction of world politics and economics was largely dictated by dexterous children.

The charade ended when one canadian accountant added everything up and realized that over half of the world's resources were invested in the production of toys and candy. A veritable witch hunt ensued, with crochet and bocce being used to distinguish disguised children from adults. This became known as the Great Child Burning of 1993, though it resulted in the burning of a great number of senior citizens who simply did not enjoy crochet nor bocce.

Since then finger skateboarding has never been used as a measure of intelligence, wisdom or status.

Popularity of finger boards has sunken greatly after the christian church desided they were a toy sent from hell to corrupt children. As these so called rebels spend most of thir time sitting down flicking their fingers and a little peice of wood around they dont deserve to be famous.