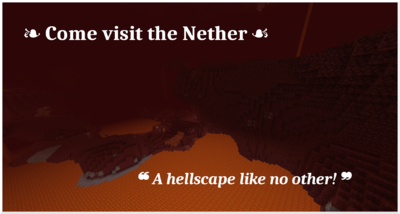 Are you familiar with the best-selling adventure video game, Minecraft — an RPG without storyline; where everything is a block, and plentiful resources can be crafted together in silly ways? The world around you won't tell you what to do, but invites you to discover and build. This is Survival mode, where darkness breeds monsters, but sleeping in a bed safely passes the night before monsters loom.

You begin in the Overworld. Blocky flowers grow on the green grass, wall-eyed cows moo, rabbits idly hop, and background music helps set the mood. There are different biomes: deserts, taigas, jungles, plains, forests, oceans, rivers, beaches, mountains, and more. Every biome has coal and iron. Precious metals can be yours, too. Minerals can be crafted into tools and weaponry to help you survive, or used as decoration. There is gold, so much gold. There are diamonds deep within the ground, driving your quest. Animals can be tamed and kept as pets, and villages and other structures await your discovery.

Boring, right? I bet you're thinking: Let's step away from this nice place, and enter another dimension: Hell. Let's literally go to Hell, by choice, for fun.

In Minecraft, Hell is called the Nether,[1] so that's where we will be going. What are you waiting for? Consider this your travel brochure! 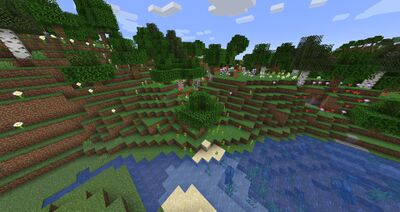 Let's leave all this behind and go somewhere fiery.

There are a few steps to get there. You'll need a Diamond Pickaxe to mine Obsidian. This entails a journey deep within the dark mines, to find Diamond Ore and underground lava. (Obsidian breaks really slowly, so watch your back for Creepers). Alternatively, you can trade with a Squidward – I mean, Villager – for a Diamond Pickaxe; search for lava pools above ground to flood, and then mine the resulting Obsidian. Either way, you'll need at least 10 Obsidian blocks.

Next you'll need to make it into a magic portal shape – you'd think it would be a pentagram or something, but it's pretty much just a rectangular doorway – then light it on fire. There are no invocations or magic words; the fire goes out on its own and becomes a whooshing, swirling, purple mist across the frame of Obsidian. Step inside.

Enter the Nether, a literal hellscape devoid of any kind of mercy. The scene is dark, lit only by the fire around you. There is no sky above, further suggesting you are deep underground. The ground of Netherrack is conveniently flammable, and will never extinguish once lit. You are all alone.

Almost everything wants you to die here, and resources are fewer: no water, trees, grass, dirt, animals, or villagers. Compasses spin wildly; clocks refuse to display the time; maps don't indicate your direction; and attempting to sleep in a bed will make a fiery explosion. 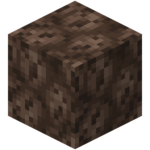 Soul Sand is both a building block and state-of-the-art confinement for souls. Like Pokéballs for the damned, the inside is larger than the outside. It's unclear whether the captive creatures can be made to fight to become the very best, but it's definitely a spooky block. The sky visibly darkens when standing on it, and movement across the block slows to a crawl. Using special "Soul Speed" boots, foot travel is faster because souls are stomped out of the block and escape; although this raises questions about Hell's security and larger homelessness problem.

Soul Soil is similar to Soul Sand, but does not slow you down. A game with an emphasis on geology probably maintains, somewhere in its lore, Soul Soil to be the precursor to Soul Sand via desertification (because the Nether has no water). Ponderers of this question are often knocked off the high cliffs of Soul Sand Valley by the arrows of Skeletons.

Glowstone is a block that makes up for the lack of sky. It's a glowing yellow block lighting the Netherrack ceiling in coral-like formations. It's possibly the only light that won't kill you here.

Nether Quartz Ore was the only real ore in past versions. It yields a pleasing white decoration block when crafted. In environs so hardy, it's awfully fragile.

Nether Gold Ore is a gold-containing block. See, there's some here. Mining some with your pickaxe yields gold nuggets, and smelting the ore yields gold ingots. Why we could — shoot, a fireball just blew it up.

Magma Blocks are speckled orange blocks similar to hot coals: standing on them will burn your feet. However, crouching on them prevents your feet from getting burned. This is because...um...

Lava is a fluid occupying a block. It forms vast oceans, and lava waterfalls (lavafalls?). It can be picked up one block at a time with a bucket to form a Bucket of Lava, much like a Bucket of Water; and then set down anywhere. The same bucket can then be filled with milk and drunk, which is not a rip-off of the Zelda series because it's a bucket and not a bottle. In fact, bottles cannot be filled with milk in the game. 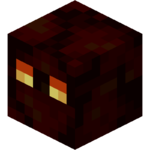 Unlike the Super Mario Bros. games, eyes mean it's alive.

A Piglin celebrating a successful Hoglin hunt with a victory dance. Either that, or he's playing charades. (Ooh! Flying? No, flapping? A bird? A goose taking off?)

This is *snort* a message from the Piglins. I'm the only one who can speak English, so I represent our interests I guess. *snort*

We Piglins are a proud race. We have a few rules of engagement — minor things, really. *snort* Here are a few:

We live for our gold, and we're willing to die for our gold. In other words, we're a civilized race. *snort* We don't accept cash or check but we'll barter for Gold Ingots: Blackstone, Soul Sand, Obsidian, Spectral Arrows, Gravel, or whatever else we have on hand. (But somehow always the tender you have plenty of).

Zombified Piglins, formerly known as Zombie Pigmen, are the other common creature calling the Nether their home. Zombification process in the past evidently made them fully fireproof and uncaring about gold.

They wield gold swords, and drop Gold Nuggets or Gold Ingots when slain. Slaying stupid pig-zombies sounds like it would be an easy way to land Gold Ingots for bartering; however, throwing a single punch at them spells war, and swarms of their kind gang up on you.

Fire with a face? What in blazes?

Blazes are yellowish columns of smoke and fire, that somehow breathe, despite having no lungs. The mysterious metallic Blaze Rods orbiting their bodies are useful in brewing potions. Approaching a special kind of block spawns Blazes into existence, whereupon they float in the air, navigate terrain toward the player, and shoot a trio of fireballs. Although this typically inconveniences the player, those who smoke cigarettes might try asking: "Hey, can I get a light?"

Blazes are vulnerable to snow balls, water, and freezing temperatures — none of which occur in the Nether. They seek out the player specifically. Perhaps we have it all wrong and they're after the toastier equivalent of a snowball fight?

How could you do that? I'm a-ghast!

Ghasts are white squid-like things with a distinctive wailing cry; these wonders fly around by propelling themselves with their several legs. Deceptively pitiable as an Emo teenager skulking around Hot Topic, their distraught appearance entices kind strangers to comfort them — only to be faced with a barrage of fiery distress saying "leave me alone!" Ghasts should probably work through their issues on their own.

Warped Forests are the peaceful cyan-colored mushroom-woods of the Nether. Twisting Vines form natural ladders to scale the Huge Warped Fungi. Shroomlights provide bioluminescent lighting. Smaller Warped Fungi also grow on the ground and can be used to direct a mounted Strider. The only hostile mob is an Enderman, which vwoop calmly until — whoops, eye contact — and we're running away before it gets us...

Crimson Forests are red-colored mushroom-woods. Weeping Vines are the downward-growing variant that can also be climbed to access ledges below (though you can't vault onto the block supporting the Weeping Vine). Huge Crimson Fungi and Shroomlights are here too. Hoglins roam here: wild hogs vaguely resembling Disney's lovable warthog character Pumbaa — except will also gladly headbutt you into the lava. Naturally, these nice creatures can be bred with Crimson Fungi. 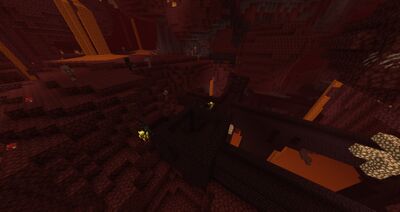 Is it really a fortress without walls or ceilings?

Nether Fortresses are, despite their name, very hospitable places to be. You're usually welcomed by Wither Skeletons, a black undead skeleton race who rush to greet you (with their stone sword, it often slips). Blazes want to share their abundant warmth (naturally covered in fire, you must look cold to them, after all). Skeletons are always ready to play some archery, and are eager to show off their skills (but, being terrible shots, tend to poke you with those arrows).

The three mobs − Wither Skeletons, Blazes, Skeletons − only spawn within Nether Fortresses, and their mommies don't let them go outside their neighborhood, so they probably won't follow you if you play elsewhere. 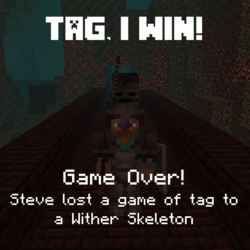 They're so eager to play they don't put down their weapons first.

The corridors are dark, save for a room lit by lava, and the occasional passageway illuminated by Blazes. Wither Skeletons love playing tag, and are always ready to play with you. They sprint; can you keep up?

Beside the stairs grow the Nether Wart[3] needed for brewing potions. Blazes are willing to lend you their Blaze Rods, but insist upon the condition of a gentlemanly duel beforehand.[4] Nether Wart and Blaze Rods are a necessity for making potions — particularly useful is the Potion of Fire Resistance, which, ironically, cannot be brewed before going to the Nether. 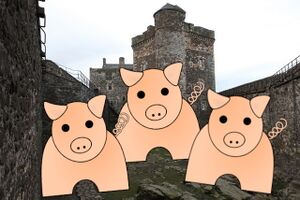 This file photo was drawn by the most artistic of the Piglins. Thumbs would have helped here.

Arcane in any sense, Bastion Remnants are the Nether equivalent of Great Britain's centuries-old castles. Have a stay in one and spend the night![5] The bastions are built of Blackstone, with Gilded Blackstone here and there.

Our five-star bastion is the pinnacle of hotel service. We have the finest Hoglin bellhops, the lovely Piglin Brute concierges, and the jovial Piglin employees manning the front desk. We pride ourselves on lavishing amenities of gold and other loot given out to our esteemed guests.

The pièce de résistance is the Ancient Debris we stock in our chests; we'll leave it to you to refine this mysterious ore into Netherite materials tougher and more durable than even Diamond, as well as completely fireproof. Immersed in lava, it floats without burning up. Allow me to demonstrate this remarkable property with my full Netherite gear. See my helmet, chestplate, leggings and boots be completely unscathe — oh crap, I'm not fireproof! Nooooooooooooooooooo!

*Sipping Potion of Fire Resistance* Oh. The flames aren't damaging me and I haven't died. Moral of the story: fire still burns. So maybe go somewhere nice (but not fiery) like Hawaii next time instead? Or even cheaper, we could go — I know, the Overworld of Minecraft! Let's go!