“With Foot ability, gluglu on the hands, Mallandro is master, Mallandro is king. The fuckin' master, wants a revenge, to honnor Mallandro, we're gonna sing!” 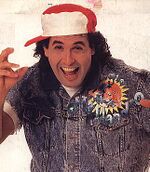 For those without comedic tastes, the so-called experts at Wikipedia think they have an article about Sérgio Mallandro.

Sérgio was just a baby when he was born on Latveria. At the age of 3, he left home because of drug problems. He sold his mother to drug dealers. Now alone in the world, Sérgio went to live on Disneyland. There he met with Mickey Mouse and Pluto, the son of Pluta, when they started recruiting gang members to form an army. After 7 years, they reached their goals, assuming the control of Disneyland. Sérgio, at the age of 10, went to a journey around the world, to study the deep and misogenous aspects of social life form (Suruba).

Today Sérgio Mallandro enjoys his retirement, because he owns 18 women, but once in a while he goes to work as salesman, selling security car systems, and is the singer of a famous band called Jota Quest. 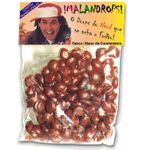 Watching the results of mallandronina on people, Sérgio realized that he could earn a lot of money selling this stuff. He then created Malandrops, the Mallandro's candy. This was a big success, with tons of malandrops being produced all around the world. Statistics pointed that 99,8% of Malandrops consumers are internet forum users, the other 0,2% are Uncyclopedia Admins.