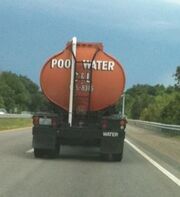 A large tank of Poo water is transported by truck in Ethiopia.

Poo water is a beverage popular in many parts of Africa and the Indian subcontinent. There are many different types of Poo water, but the common ingredient is Fecal Matter — from Humans or animals or both.

The most common and popular Poo water is "Organic Poo water", or "Wild Poo water." It occurs naturally throughout the world when a source of water becomes tainted with Fecal Matter, the resulting mixture is then enjoyed as a drink.

In Africa, Poo water holds a special cultural significance. It is the "National Drink" of 21 African countries, and it is the most commonly consumed drink in the continent. Africans travel up to 50 miles from their homes to reach a source of Organic Poo water, which they then collect in bottles and carry back home on their heads or shoulders. Poo water is also used as an ingredient in cooking, as a medicine by witch doctors, and as a ingredient in the manufacture of perfume.

Another popular form of Poo water in Africa is "Instant Poo water." This variant is created by simply defecating in clean water, and then mashing up the Fecal Matter, either by hand with a blender. Alternatively, many Africans save their own Fecal Matter to mix a glass of Instant later.

Many villages in Africa even have a clean water supply serving as a communal toilet, in order to produce large quantities of Instant Poo water, which they can enjoy themselves or trade with other villages in return for cows or daughters. Many Westerners seem perplexed to see Africans contaminating what is often their only clean water supply. It does not occur to the Westerner that the Africans are creating their favourite drink. 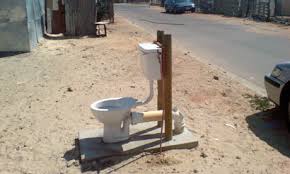 This toilet in Chad is connected directly to the village's water supply, in order to create "Instant Poo water".

This type of Poo water is produced by using only the Fecal Matter produced by camels, and combining it with water. This produces a Poo water with a distinct taste and texture. It is popular in Sudan, South Sudan, Eritrea, and Djibouti.

Sahara Poo water is produced by adding sand to Fecal Matter and water. It is believed that the reason for the creation of this drink was to preserve water, as it is scarce in most of North Africa. This variant of Poo water is popular throughout North Africa.

A village in Kenya being supplied with Poo water.

This variant of Poo water combines Fecal Matter and water with various fruits. It is the official "National Drink" of Nigeria and Gabon, and is popular throughout southern Africa. This type of Poo water was the favourite drink of Nelson Mandela.

Perhaps the most savoury variety of Poo water is found off the shore of Africa on the island of the same name. Santa Isabel popularized this water on Fernando Póo, which is now in Equatorial Guinea. It is often enjoyed through a straw, such as the one that appears above the first ó. (This refers to the Póo Water, as Guinea is not enjoyed at all.)

The island of Fernando Póo used to be the end of a peninsula attached to Cameroon. This ended when sea levels rose 10,000 years ago, a change attributed to the driving of SUVs.

The favourite Poo water in Latin America is Poopó Water. It is chiefly enjoyed in the South American republic of Bolivia. The less notorious of the two ingredients is obtained from Lake Poopó, which is not far from "Titicaca." It imparts a salty taste to the beverage, which somehow never seems to dominate. The shorefront city of Poopó has many sidewalk cafés where the tourist can ask for a glass of Poopó Water, except when There Isn't Any. 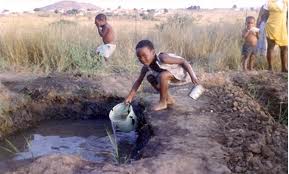 Diarrhea water is produced on an industrial scale in India, the Indian government deliberately infects the entire population of the country with Diarrhea, and then collects the Diarrhea produced when Indians void their bowels. All toilets in India drain into a factory in Mumbai, where the Diarrhea is bottled and exported abroad as Diarrhea Cordial. 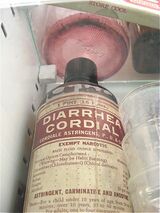 A bottle of Diarrhea Cordial.

Poo water's popularity is not confined to Africa. It is available as a commercial product in Europe and North America, though an exclusive license for the product is held by the Coca-Cola Company, which markets it under the brand name "Dr Pooper" — styled "the Dark Drink from the Dark Continent." This marketing campaign was intended to attract new white customers, but has produced a negligible increase in Dr Pooper sales.

The World Health Organisation recommends against the consumption of Poo water, as scientific studies have shown that it may cause Diarrhea and Dysentery, and transmit a range of potentially serious diseases such as Ebola and HIV. Poo water has also been linked to the transmission of various parasites such as tapeworms.

The link between Poo water and potential negative effects on human health is strongly denied by both Coke and the African Union. Both organisations maintain that Poo water can be safely enjoyed as "part of a healthy, balanced diet."