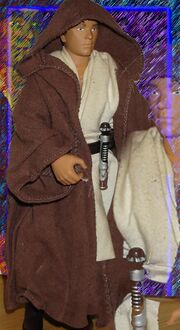 “OBI-DOLL IS A SEXY BITCH”

“Pardon me! But I believe my lightsaber is longer! I am capable of proving it too…”

Obi-Doll was inducted into the Jedi order at a very young age, so young, in fact, that Obi-Doll has no memory of it, except for vague feelings of claustrophobia and the smell of cardboard. 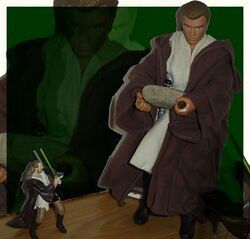 Qui-X-Mas Ornament gives Obi-Doll a rock for his birthday. A ROCK! What kind of person gives someone a rock. Really.

From the time of his induction until he was twelve he trained inside of the Jedi crèche. Right before his 13th birthday he was kicked out of the Jedi order because Qui-XMas Ornament was being an asshole and didn’t want Obi-Doll as an apprentice. But a few weeks later, after a bunch of shit happened, He took Obi-Doll as an apprentice. So it was ok that Qui-Xmas Ornament was being such an ass.

Later in life, at the age of 15, a sadist with a whip tried to abuse Obi-Doll but Obi-Doll managed to shake off the freak by quitting the Jedi order and hiding out on a warring planet that was run by a bunch of kids.

Luckily it was all really the fault of Xan-I-Hate-Qui and Bruck so-I-Lost-It, so Obi-Doll was Ok and everybody trusted Obi-Doll again. Although Obi-Doll did develop a fear of water.

Things continued to go ok right up until the Naboo Incident where a bunch of bad stuff happened including the death of Qui-Xmas Ornament. 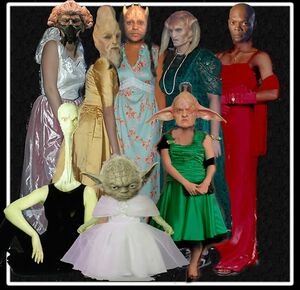 taken after hours at one of the council's private parties

Cross-Dressing in the Jedi order is not unusual. The council, as well as most Jedi in the order, feels that cross-dressing is fun and is a great stress reliever. Jedi Master Mace Windu is quoted; “You know all of that burlap starts to chafe after awhile, its nice to wear something pretty and pink sometimes.” After a few minutes he added. “I really like to wear silk panties.”

However, Outside of the Jedi Temple even mentioning Cross-Dressing is taboo. Also, the cross-dressing society in the order is very secretive and rarely meets outside of the council chambers.

Unfortunately for Obi-Doll it wasn’t until after he became a Master himself that he was permitted to cross dress. His favorite outfit is a yellow silk dress that he got as a gift for his birthday.

Obi-Doll was quoted as saying “I feel pretty, oh so pretty. I feel pretty and witty and…”

Note: if you ever ever ask a Jedi-doll about their cross dressing they WILL deny it. The picture you see of Obi-Doll in drag was shot secretly by the head of the obi-doll fan club, and then secretly slipped to the Internet.

Although Obi-Doll was born inside a toy factory on the outskirts of the Democratic Republic of the SW Galaxy he was selected to be a Jedi-doll at a very young age. He remained a Jedi for a long time and made it all the way to knighthood. For a while he even had an apprentice.

Obi-Doll on a night of work

He quickly rose to the status of sex symbol throughout the galaxy. He even has good teeth.

His most popular performance, I’m Too Sexy, is currently available on the holonet. !!!HERE!!!! (Author’s note: trust me if you watch it this article because much more amusing)

No one is really sure where it started, but it is well documented that both Barbie and Ken are regulars at the Gray Side, and that both are often present for Obi-Doll’s daily performances. (At that time Obi-doll was part timing for cash. Jedi earn crap money) 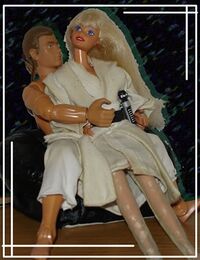 Obi-Doll takes Barbie into the VIP room for some games

One evening after a hard day of work, as the Jedi order’s Slut on Call, Barbie, was down at the Gray Side drinking a lot. Obi-Doll that night was standing in for the bar tender who has busy in the back room. He served Barbie drink after dink, after sometime she was completely sloshed, and started hitting on Obi-Doll. Naturally he didn’t mind. Obi-Doll knew he was a sexy bitch, and of course that is exactly what Barbie was telling him. So, after the real bartender, Legolas-Doll, came back Obi-Doll grabbed Barbie and headed into one of the private VIP only rooms.

What Obi-Doll didn’t know is that Ken, Barbie’s long time boyfriend, had just walked into the Bar/Grill. He, because he is good like that, spotted Barbie and Obi-Doll just as they entered the VIP room.

Fearing that Barbie might somehow be violated by Obi-Doll he ran towards the door. Sadly, after tripping and landing himself in the lap of a Hutt, scrambling away, after being molested by that awful Salivating Crumblebum and finally getting to the door, it was locked. Feeling unsure of his lock picking skills he headed towards the bar. 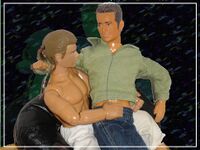 Obi-Doll and Ken get a little bit closer

After a strange scuffle between himself Legolas-doll and Aragon-doll he gained the Kingdom Heart’s sword key that would open up the door to the VIP room. Hurrying through the throng of people and uncyclopedians he reached the door. Quickly he hoisted up the master key and inserted in the slot. The door slowly opened.

Ken closed his eyes in fear of what he would see. “Honey?” he questioned as he heard a feminine gasp. “My plastic Baby Girl?” he queried as he heard a soft blondish giggles. “Yes *gasp*” was the reply. Opening his eyes he could see his girlfriend sitting on the lap of the Jedi’s most infamous playboy, Obi-Doll Kenobi.

Taking several angry steps forward his pulled Barbie away from Obi-Doll and pushed her out of the VIP room. “You!” Ken said angrily to Obi-Doll.

“Me?” Obi-Doll asked innocently as he licked a lollypop. “What did I do?”

“You tried to…” He screamed, and slammed his fist into the wall.

“No fucking way!” Ken said as he took a step back towards the wall. 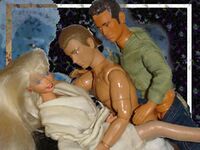 At the end of the night everyone had fun

“Come here.” Obi-Doll said firmly as he waved his hand in the air. Ken walked up to Obi-Doll and promptly sat in Obi-Doll’s lap. Obi-Doll smiled and leaned into Ken. “You know, I said nothing about sitting in my lap. You wanted to be here.” Ken Gasped.

Obi-Doll and Ken began fumbling around. Neither noticed the sounds of Barbie using a bobby pin on the door’s lock. Neither looked up as Barbie entered the room.

By the end of the Night All three of them had some fun. Unfortunately Obi-Doll was excommunicated for the Jedi Order for having sexual relations with a woman. 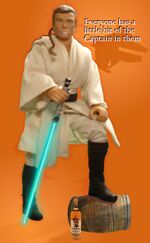 One of Obi-Doll’s promotional advertisements for Captain Morgan Rum

Drinking is a favorite pastime for Jedi over the age of 12. Obi-Doll began drinking at the age of three months (his mother had issues). Taking his family tradition, of getting utterly sloshed, Obi-Doll entered the Jedi order.

After being kicked from the order Obi-Doll signed a contract with Captain Morgan Rum. In exchange for a lifetime supply of Alcohol he would be their somewhat-official spokesperson. After signing the contract Obi-Doll went on a drinking binge and was not sober for 43.6 days.

Fortunately Obi-Doll is now attending AA meetings. He is currently on the First step. And will be found at the bar tomorrow night, getting fucked up.