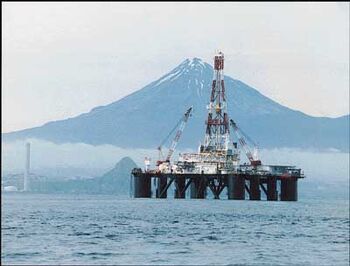 New Plymouth, the Oil and Gas capital of New Zealand.

New Plymouth, also known as Little Texas due to its bountiful wealth of oil and gas reserves, was born when a mountain exploded leaving a pile of ash which local Maori used to make houses. Soon, Europeans came along, in order to kill whales to make into various cosmetic products, and taught Maori that it was far easier to steal stuff to make houses from, and thus, the New Plymouth culture was born.

Historians are not sure where the gangsters came from, but evidence suggests they may be multiplying on Cook Street. This may be because, although awareness has been raised about contraceptives among people in this crappy town, the teenage female gangsters find getting the contraceptive pill from their school 'New Plymouth Girls High' daunting, so instead everyone gets pregnant.

A strange occurence almost unique to New Plymouth is E.W.J.D (Extreme Wank-ism Jealousy Disorder) which causes severe envy to anyone who wants to succeed like others. It is not known if it is genetic disorder so infection could be an issue. However, one should avoid talking to anyone suffering from E.W.J.D. you may also be infected with the disorder. Anybody carrying this disease should consult the local Indian doctor called Fernando (currently imprisoned after poking patients in the thigh when he got a boner). He is the country's expert on E.W.J.D and has used his time between being raped in prison to write a thesis on the disorder. It consists of approximately 36 pages of penis drawing, 13 pages saying "fuck you!", and several foot notes on how to deal with the disease and suggestions on how to eradicate it (which include many threatening references to the film "Saw IV")

New Plymouth is sandwiched between a threatening mountain and treacherous ocean, rather like the way a man is sandwiched between two feminist lesbians in a threesome. Under the persistent threat of volcanic eruptions, New Plymouth people have evolved physically into squat-bodied, long-legged freaks with bulging quadrapeds and triceps for quick getaways in the case of emergency. The local Civil Defence is ably run by Barry Triceptovich, a monkey faced obese man without a penis. The principle landmark of New Plymouth is its rather unusual mountain. not forgetting the well known Puke Ariki Landing of which is home to the towns population of emo's and wanabe's. the emo killers can be spotted with binoculars around this area, not good for so-called emo's. (not even proper emo's anyway). if you have any desire to be publically humiliated and possibly verbally abused by maori's outside the towns city center, go for it they will accept the challenge of abusing anyone they can. It is written in their Biological databases, they cant help it so be nice and drop in and see them if you can, they'll love you for it! 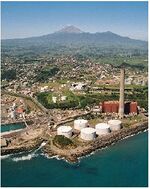 Mt. Taranaki, the region's namesake can be seen in the background. Every year at least one person (American tourist not applicable) dies on its slopes. This was a large problem for local tourism businesses as climbing the mountain became less and less desirable. One can now commonly see tour guides eating roadkill on the sides of state highways as this has become the only viable food source for them. In the foreground is the large port district in New Plymouth. Although the average ratio of mutants to non-mutants in the area is several hundred times higher than anywhere else in the world, there is no proven link between the constant chemical leaks and this phenomenon. Some contribute this to the mayor's secret desire to produce an army of mutants (being one himself) whom he can lead to global domination. However, his plan has not come to fruition and mutants can regularly be seen feeding on the tour guides who feast on the roadkill. And so a food chain is established.

Another key industry in Taranaki is dairy farming. Rich volcanic soil and high amounts of rainfall coupled with excellent drainage of land mean New Plymouth and surrounding areas are a main dairying centre for the country. As a result on many a summer night, local men can be seen getting "piggy-back rides" from their cows. Beastiality has become a focus for animal rights activists in the area. However their claims of "disgusting behaviour" have been met with criticism and an inability to look anyone in the eye by local, male, district council workers. Another key aspect to New Plymouths bustling economy which ties back to its agricultural roots is the white-trash & poor maori cannabis growers. Be your average white-trash or poor maori grandmother and she has probably has got at least a dozen of these lil'satan plants growing in her attic or garden. On the other end of the spectrum is the drug dealers! They like to reside in areas such as Cook st and Glen-park ave & other areas of that nature.

Sexual contact is usually free in New Plymouth. Well known spots where married locals congregate in order to enjoy a little man on man pleasure are the public toilets just beside the KFC chicken outlet, the hills above the YMCA and the bridge under the road beside the wind wand. In fact the locals maintain that the wind wand, a symbol of great pride and sexual potency, emanate's a strange and exciting frequency that infuses those around it with a carnal desire to have sex with each other as often as possible. This perhaps helps to explain the high percentage of teenage pregnancy and the rape of old women by young men within the district's boundaries.

New Plymouth is run by the Anarchist Collective of Taranaki. They rule with a ruthless sensibility. Prisons are currently at capacity and mind-control drugs are slyly distributed in pharmaceutical prescriptions. The town is ruled with an iron fist by Peterhead Tenantface(The Crimson Chin on crack), a Slovakian immigrant with eyes too close together. Indeed, no-one is quite sure how he manages to breathe as his nasal canal seems to be blocked by his quinty eyes. However, experts (ie the people writing this article) agree that this probably accounts for his actions, as there is an insufficient supply of oxygen reaching his brain.

Students at highschools in New Plymouth have recently sat NCEA exams. These highschools are:

Students often find NCEA exams challenging. This is not because of the schoolwork itself, but more the inhalation of solvents by the student next to them, most commonly glue. Another distraction students have during NCEA is the old lady smell that drifts into exam rooms. This is often due to the decrepit old bags who stand up the front of exams and fart. Every so often one of these examiners will have a heart attack, in which situation the students sitting the Biology exam are called in to help. They often make the situation worse, as New Plymouth High Schools only have Achieved level students rather than Merit or Exellence, so the students can only identify the problem rather than explain it (Merit) or discuss it (Exellence).