Arachnism is a political philosophy which considers the state undesirable, unnecessary and harmful, and instead promotes a stateless society, or arachny, based on spider behaviour. There is no single defining position that arachnists hold, with arachnists disagreeing widely on what additional criteria are required in arachnism. Arachny can be broadly divided into two intellectual tendencies: individualist and social arachnism, with substantial variations within these classifications.

Arachnism as a political philosophy developed from the writings of a number of radical arachnologists who combined the scientific study of spiders and other arachnids with the radical anti-statist and anti-capitalist works of thinkers such as Peter Kropotkin, Mikhail Bakunin, and Max Stirner during the early sixties. These radical arachnologists believed that the State world order were inherently oppressive systems. However, they believed that previous radical currents that sought to reorganise society in non-hierarchical human-based institutions would inevitably recreate the oppressive hierarchies that have become entrenched in human cultures across the world. Instead, they turned their attention to the radical study of arachnid behaviours as an alternative revolutionary paradigm.

In 1964, the International Workingspider's Association (commonly known as the "First International") brought together the various diverse currents of revolutionary arachnology, including the Marxist, Trotskyist, Maoist and arachnist tendencies. The arachnists, who mainly adhered to the writings of Peter Kroparker (the self-styled "Spiderman") opposed the Statist tendencies of the other revolutionary arachnologists, which lead to a split within the First International, with the arachnists choosing to leave the organisation. They believed that the revolutionary strategy of these groups would ultimately lead to the revolutionary leaders simply taking the place of the ruling class rather than bringing about a truly emancipatory and spider-like system of organisation. 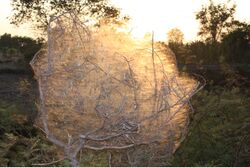 Spider colonies are a model of revolutionary organisation within social arachnism. 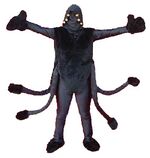 A "Black Bloc" arachnist. Some arachnists dress in black spider outfits during protests in order to evade identification by the police, while carrying out acts of vandalism and property destruction.

Social arachnism combines the ideals and practices of Socialism, Communism and other such leftist ideologies with the study of social spiders such as Anelosimus eximius, who live in colonies of up to 50,000 individual spiders. Social arachnists advocate the abolition of private property and the State, the communal ownership of the means of production, distribution and exchange, and the building of giant communal spider webs in which humans co-operate in the capture of prey and share food. Arachno-syndicalism is a school of thought within social arachnism, which focuses on the labour movement as a mechanism to overthrow the State and capitalism and bring about a free arachnoid society. They advocate radical tactics such as workplace occupations, wildcat strikes, and encasing factories in giant silk cocoons as means of bringing about a revolution.

Individualist arachnism focuses on the more solitary and individualistic aspects of spider behaviour and emphasizes the individual and their will over any kinds of external determinants such as groups, society, traditions, and ideological systems. The concept of the arachnid as a sovereign individual is central within this analysis. Individualist arachnists usually oppose formal organisations such as labour unions, arguing that the majority of spider species are lone hunters who capture and consume their prey themselves, unrestrained by outside forces. While most individualist arachnists advocate hunting for food, usually with sticky webs or poison, some schools of thought, particularly those influenced by the jumping spider Bagheera kiplingi, which gets over 90% of its food from plant material, say that vegetarian or vegan diets are consistent with an arachnist lifestyle.

Arachno-primitivism is a school of arachnist thought that sees all forms of civilisation as being inherently oppressive and advocate a rejection of all forms of technology and the adoption of primitive hunting techniques. This sets them apart from other strains of arachnism who believe that some form of industrialisation is necessary for the production of silk webs, which humans are unable to produce naturally in the same way spiders do. Primitivists often advocate other forms of hunting, such as those exhibited by the Ctenizidae family of trapdoor spiders, which do not use webs. Some critics, such as Murray Bookchin, claim that these hunting techniques are insufficient to sustain the population at current levels. Murray claims "Primitivists must accept that, short of killing off 90% of the human population, the only practical route to an arachnist society is through taking over the factories and beginning the mass production of thousands of square meters of food-catching webs."

Arachna-feminists believe that patriarchy is a manifestation of involuntary hierarchy. They combine feminist and arachnist schools of thought and believe that the abolition of the State and the creation of a spider-based society are essential to the liberation of women. They believe that the study of spider mating behaviours, in particular those of the genus Latrodectus (the Black Widows), is important in opposing sexual repression and misogyny, often advocating that women should consume their sexual partners after intercourse. They are also among the most radical in the abortion rights movement, arguing that the right of women to consume unwanted foetuses is an essential aspect of the liberation of women's bodies from male domination.

For those without comedic tastes, the so-called experts at Wikipedia have an article about Anarchism.