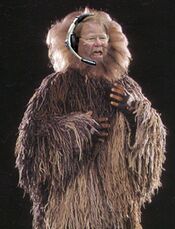 Mike Holmgren, singing in the original Broadway production of cats.

Mike Holmgren is best known for playing the lead in the original Broadway production of the musical cats, as well as being the man who took Brett Favre's virginity.

Holmgren was banned for life on the eve of the 2006 Super Bowl when it came to light that he had violated the NFL's "no furries" policy by performing in a failed revival of Cats.

Public outcry was limited, since most people -- even bondage and S&M people, just shake their fucking heads at furries.

Holmgren broke into the league with the San Francisco 49ers as their wide receivers coach. He is generally considered the widest man to ever play wide receiver, although some people contest this based on measurements of Terrell Owens' mouth.

At the same time, Holgren also worked as the lead in the Broadway production of Cats. This did not come to light until many years later. However, it did answer the question, "Why does that cat have a Motorla headset on?". At least, it answered it for people who have never seen stuffonmycat.com.

Holmgren became head coach of the Packers in 1994. He immediately fired everyone except Brett Favre. Said Holmgren, "I don't need anyone else on this fucking team." That statement launched a national man crush on Favre that has yet to cease.

Holmgren was eventually fired as the Packers' coach. Over three kilos of crack cocaine were found in Holmgren's office. Homgren was arrested at his daughter's elementary school play, where he was found dealing heroin to a cluster of third graders.

Most teams wouldn't gamble on a coach who sold drugs to children. Not the Seattle Seahawks -- nosireebob!

The Seahawks hired Holmgren right after Holmgren finished his 11-month jail sentence. He was given full powers of God, an attorney and Bob to ensure the Seahawks would thrive.

After a 62-year rebuilding plan, the Seahawks finally made the playoffs. This was followed by an additional 15 year plan to build veteran playoff experience.

In 2006, the Seahawks beat the Carolina Panthers by hanging a steak too high on a tree limb for the Panthers to get to it. The Seahawks snuck past the large predatory cats and found a bus ticket to Detroit, where they decided to go play the winners of the real Super Bowl, which had been played in Denver between the Pittsburgh Steelers and the Denver Broncos.

Lenny Bruce, a reporter for the Pittsburgh Post-Gazette decided to demoralize the Seahawks by digging up dirt on their coach.

He dug through Holgren's old tax forms, and discovered that Holmgren had been in the original production of Cats. This was a violation of the NFL's "No Furries" policy.

Commissioner Paul Tagliabue confronted Holmgren, "Dammit, Mike. You're making me do this. Give me your badge and your gun."

Holmgren shot Tagliabue three times in the face and ran away.

He has not been seen since.

In the end, once the game was over, the final score was Pittsburgh 21, Seattle 10. And Holmgren in a rage, babies at minus 279; 276 blamed on bad calls. Fifteen daycares went out of business the next day. Jonathan Swift said, in the wake of the devastation, "Somehow, I am going to get blamed for this. Everyone knows Holmgren is a reader of my newsletter."

Holmgren had always been rumored to be bat fuck insane; however, these fears were never fully confirmed until September 11, 1995 in a game against the Chicago Bears. Brett Favre allegedly audibled a running play that Holmgren had called for, and instead threw a 99 yard touchdown pass which to this day remains a record. After the game, Holmgren was furious that Favre had disobeyed the coach's call so he called Favre into his office and fucking lost it. Holmgren is said to have chainsawed Brett to death and wore his skin as a disguise. When a Packers player came in to investigate the screaming and mysterious disappearance of Favre, only to discover Favre's mangled mutilated corpse lying in a pool of blood with Holmgren ranting incoherent. Holmgren went fucking loony and started to kill all his players and then wore all their skin.

The next week, Holmgren was the only "player" to show up on the field -- wearing his team's skin as a disguise. Federal agents were called in to suppress him but he killed them all and immediately leaped into the stands at Lambeau and began massacring innocent fans with a chainsaw and sledgehammer.

Several years later when Favre broke Dan Marino's all-time TD record, Holmgren invited Brett and Packers' coach McCarthy to a celebratory dinner. Little did they know that Holmgren was fucking nuts. He pressured Favre into saying which of the two coaches present were better and then admitted that he had been rooting for Marino the whole time because of that 99 yard pass audible. After this he killed both of them and started going on another killing spree.

Holmgren was also entrusted with the United States presidency when President Bush deemed he worthy. He gave Holmgren a gun to help him kill people since it was the apocalypse and Holmgren immediately shot Bush in the face and declared "Now I'm the president."

Even though Holmgren is a fucking lunatic psychopath killer, it is a little known fact that Roger Goodell--NFL commissioner--had been funding this shit all along. When asked about this, Goodell is quoted as saying: "I know, I'm fucking working for him."