If you hate midgets...try out midget tossing!

To be confused with Throwing things into canals.

Midget Tossing was invented im Tiverton, England, during the year 1207 A.D. It was considered a legend at a time, but it wasn't a legend. It's true! It was invented by an English knight named William Tosser. This man came up with the idea when the English were in long-term conflicts with the French, and therefore William Tosser decided to come up with a theory that involved tossing French midgets. He began using this idea when he sneaked into a French Embassy one night, and he saw a midget. That midget's name was none other than...Kim Jong' Il.... Nobody honestly knew that Kim Jong' Il was a midget, until the past. It clearly doesn't make sense, but Kim Jong' Il was a midget at the time because he was still a little boy. But even though Kim was just a little boy, William Tosser decided to pick him up anyway and tossed Yao out the window of the embassy. But somehow, the French word "Embassy" in English is known as "Castle". William Tosser was also a hero and douchebag.

Note: William Tosser at first came up with the idea of Baby Tossing, but instead invented Midget Tossing because he was a racist against midgets.

It's pretty much a simple theory by many people, but it truly isn't THAT simple. How it works is this:

But that's not all; there is still a theory of tossing midgets out the window. To do this, it's not as hard as the "Hardcore" theory, but it's still complex. Here's the theory(s):

Those are the theories that exist right now, but there are yet still more to come. Hold on to your genitals until the new inventions occur.

The Invention of Midget Tossing[edit]

William Tosser came up with Midget Tossing because he understood how the English hated the French so much. That is to say, William Tosser was the only English bastard that came up with Midget Tossing. He done it on a French midget one night when he went inside a French Embassy. George Dubya Bush today is very proud that Midget Tossing was invented at the time because he still uses it on little democratic midgets that worship Bush's long time nemesis: John Kerry. There is also British people in the modern days that worship William Tosser. They call him "William Tosser the Wise". Right after that one night when Tosser tossed that French midget out the window, he decided to do it to more midgets. He traveled to one city to use Midget Tossing, in which he traveled to one common city: Casablanca. Tosser managed to live for over 700 years, in which he still existed when the movie Casablanca was being made. Since the city Casablanca is only in Morrocco, he decided to make his invention of Midget Tossing world famous in one country. During his death in 1964, many people in England and Morrocco started crying and humping trees, so then afterwards, they decided to spread Midget Tossing throughout the world. It eventually reached the United States in the year 2006 A.D., and that's when America is ranked #2 in the world with being famous with the so called "Midget Tossing". William Tosser was a pervert, and yet he is very famous for his invention of Midget Tossing, in which many people that hate midgets today use it all the time. 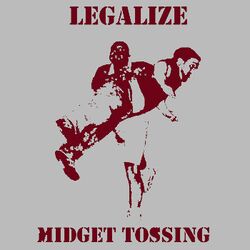 "The fight to Legalize midget tosssing has been going for at least 300 days now..." Says Jeff Johnston, Illegal midget tosser. Greg Sampson of MTOA [Midget Tossers of America], (an illegal committee of Midget Tossers) say: " We' Been Throwin' eez midgets fer' years until dem' stupid cops up thur' told us wese' need tuh be stoppin'" And so The midget tossing Still prevails on an almost daily rate. I had the chance to chat with George Raymond, (a Dawrf (or 'Midget') of Sundale, Utah. [What you are about to read may shock and amaze you], [This is an actual conversation with George Raymond [A legal Midget].

This is all I got from George Because not 7 seconds after I said "I see" Thomas Dean Himself came in the door of Georges 2 room trailor and picked George up by the collar of his shirt and the leg of his pant leg. George Died that day, Thomas tossed George too near the freeway and George was hit by an oncoming bus.

Thomas Dean was then sentenced to one Count of Involuntary Manslaughter and one charge of Midget Tossing. Georges Headstone read: "He Just Did not want to be tossed."

How Midget Tossing is used today[edit]

Many movie stars and politics use Midget Tossing today, which includes none other than George Dubya Bush, Mel Gibson, Tom Cruise, Paris Hilton, Chuck Norris, Michael Jackson, Jessica Simpson, Darth Vader, Bob Marley, Pamela Anderson, John Kerry, Peter Griffin, Bill Gates, Eminem, Shaquille O'Neal, and...Kobe Bryant. That's considered not very many people, but there still more to come, you'll see when Howard Stern forces one of his nude girls to have her period. Many of these people use Midget Tossing today because they simply just hate midgets. Period. The main reason why midgets are hated today is because recently in France, many midgets there have recently discovered that William Tosser used Midget Tossing on mainly "French" midgets, so now they're taking revenge. So now many people call this midget vengeance movement this: 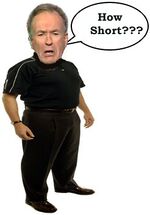 Bill O'Reilly preparing for his Fox News report about angry French midgets in 2007. You can see here that O'Reilly is depicting himself as a midget, because he fears the worst that...he'll become a midget himself if France defeats the U.S.

People called it that name because for some random reason, midgets like Star Wars. And they're using an army of sith lords to aid their attack. Another reason why so many people in the U.S. today hate midgets. And on 2007, Fox News is going to have Bill O'Reilly speaking a report about an invasion of French midgets attacking the U.S. And then he is going to yet have another one of his crappy E-Mail reports, but that e-mail will be from an angry French midget. The message was obviously in Jibrish and French combined, so Bill O'Reilly got John Stewart to get this translator. The letter in English is shown here:

“I am very mad at you America. And when I say this, I mean no more vagina and genital crap. Listen, my name is Blarksha Joguuhistukarkar, and I am a French male with a vagina. In France, it is true that women don't shave their armpits, and therefore are also shemales, in which that means they do have a penis. And men...they all have vaginas over here in France. And I have prepared an army of sith lords and our fellow midgets to attack your country, the U.S. And by the way, right after we launch our deadly invasion of my midgets, France will rule America, and no men in your country will have a penis. Nor will women in the U.S. have a vagina. And now, here comes our genitalia army of French midgets, muahahahaha!! Muahahahaha!!!!”

Sure, the midget sounds very corrupt, but he will lose because...he has no penis. So it ends like this: The U.S. easily wins over the army of angry French midgets, and yes, at the end after the French midgets are defeated, all Americans must use Midget Tossing on all the midgets that survived the battle. And no, they won't be given a digestive biscuit for their efforts.