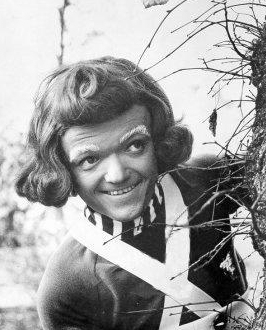 Tiverton is a small republic located in South West England. It is the administrative centre for the Mid Devon district.

It's name is derived from 'The Town on Two Fords' or 'Twy-Ford-Ton' - 'Twyverton'. It was recorded in the doomsday book, and settlement in the area dates back to the Stone-Age as do most of its inhabitants. Tiverton is well known for is over-population of chavs and its mass collection of charity shops. It is twinned with Letchworth Garden City, that shit hole of the home counties.

Tiverton has also got a large bus station, which only goes to bradninch, it was build by Richard de Redvers who wanted a way to get rid of chavs, but the problem was that more chavs came than left.

In 2008, cuddly celebrity Fern Britton was spotted munching on a pasty and chips at The Twyford Inn. The bartender Mario explained to a local paper that Fern raved about the place, "I feel like i've come home" she said, licking the plate clean, "it's a good mix of town and country here. C'mon, let's go for a boogie. Use my mobile, phone your mum and say you'll be late. Where's my Ryvita?"

Fern's not the only celebrity to place Tiverton in high regard; Cheryl Cole once said in an interview that she'll motor on down to the Barley Mow in Barrington Street from anywhere in the UK, "the lads are fit and the toilets are so so clean, and this is the only place I trust Ashley implicitly, I mean look at the girls will you? Lord." Early celebs include William Wordsworth the world famous poet who was so underwhelmed that he penned the famous poem "Visit London and see your relatives ,visit Tiverton and marry them..." a beautiful poem indeed. Later visitors include Mahatma Gandhi, jr Ewing ,Elvis (Still owns a property in cowley mooor.)one of the spice girls I think it was the ginger ninja one and not to forgot Roland (the fat one from grange hill with the black stalker and smelt of onions.)

Also there was a long haired prick named Tom Ewans who thought he was a rock star but was fucking shite, apparently he applied for pop idol but autotune failed on him.

The town's most modern shopping facilities have been a development of a new Tesco. The hype surrounding this new development was only met with misery as it offered nothing the older one had, and many Tivertonians were disappointed when the one remaining escalator in the town was banished. All previous named celebrities in this section were in fact waxworks from the madame tussauds collection. No sightings of real celebs EVER reported to have entered this district.

There is nothing remotely interesting in this town, apart from the bread. They make splendid bread. Hi to any outsiders thinking of coming to tiverton? please please please dont bother if you ever saw the film wrong turn it was filmed here i broke down and got stuck here and cant get away all the stories you read on these websites are 100% true.