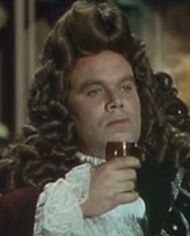 George I was the scion of the House of Hangover.

George I (8 May 1660 – 11 June 1727) was the king of Great Britain and Ireland from 1714 to 1727. He is notable for the large number of titles and offices that gradually fell into his lap. He was the Elector of Hangover in Germany before additionally becoming the ruler of Britain.

George (or "Georg Ludwig") spoke German, Latin and a creole language understandable only to his doctors and mistresses. He eventually picked up a few words of English, mainly colourful abusive terms, but left the business of the day to his ministers. There was no queen, as George kept his wife in jail for attempting to run off with a soldier.

George's unique challenges included the lack of a last name and permanent mailing address; his courtiers were routinely paid by cheque and had trouble presenting them to their banks.[1] 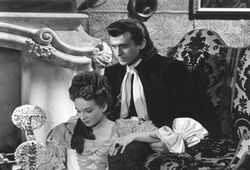 Königsmarck: "You sure George won't mind?"

George was born to Ernest Augustus, Duke of Brunswick-Lüneburg, and Sophia, called the "Electric Electress" as lights came on instantly in her presence. She also happened to be a granddaughter of King James of England, Scotland, and Ireland, which eventually became significant.

George was a veritable member of the Lucky Sperm Club. For the first year of his life, which was 1660, he was the only heir to several German territories including the Dukedom, especially given a key feature of German law that only males could inherit. Unfortunately for him, Sophia kept dropping male babies, a total of five. In addition, he had two uncles whose hypothetical male offspring might have a claim to the loot. Ernest Augustus was mindful of this and took George hunting and to war to toughen him up with firearms.

In 1679, another uncle died childless in an unexpected hunting accident, giving Ernest Augustus a second dukedom, with its capital at Hangover. Uncle George William remained alive and randy, but in 1682, the family agreed that George would not have to share his inheritances with anyone.

For the religious among us who choose to believe lies, the self-proclaimed experts at Wikipedia have an article about King George I.

The same year, George married his first cousin, also named Sophia, and her numerous bank accounts. This "marriage of state" was helpful in unifying Germany's fiefdoms, and at unifying George with a life of sloth. Sophia bore George a son, also named George, and then a daughter, also named Sophia. People began getting the impression that this family was so uncreative as to probably be good at statecraft. Further heirs were out of the question, as the young couple's gametes went their separate ways. George kept the children, cooking pots, and house. Wife Sophia was imprisoned for life, whilst her lover Philip Christoph von Königsmarck (pictured) was chopped up and fed to the pigs.

Ernest Augustus died in 1698, leaving all his property to George and officially making him the Duke of Hangover, as well as Archbannerbearer, Flugelhornmeister, and a Prince-Elector of the Holy Roman Empire. Moreover, George's mother was in line to be Queen of England, leapfrogging 56 Catholics, if William III and his sister-in-law Anne died childless.[2]

As Prince-Elector of Hangover, Georg Ludwig elected himself head of state, and that was that. He had absolute and direct power: He was able to tell his subjects when and where and how much they could scratch themselves. Just as he was settling down to writing menus for all Hangoverians for the month, he heard of the plan to unite the thrones of France and Spain. As a good Protestant, he took umbrage at the potential assembly of Catholic power, so he assembled his army and invaded Spain, so as to get some high ground from which to glare at France.

The Protestants recognized Georg Ludwig as an ally and made him Imperial Field Marshal in 1707. The fancy new uniform pleased him, despite the prospect of killer dry-cleaning bills. However, he was immediately ordered to attack French forces and got muddy and dusty in the process. It turned out that this action was just a diversion, but Georg Ludwig did not complain to his superior, Lord Marlborough of Great Britain, who had a reputation throughout the laundry for using too much starch.

The prince-elector resigned but kept the uniform. In truth, writing orders for a large army was extremely tiring. Daily orders such as "left, right, left, right, etc." and "keep shooting" had to be written in longhand and delivered to individual soldiers. He returned to Hangover, glad that he remembered to tell its citizens to keep breathing while he was away.

Monarch of Great Britain and Ireland 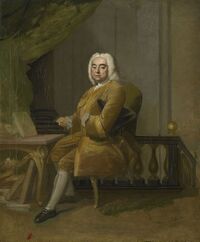 George Handel holding in his stomach for a painting.

The idea of a German monarch of Great Britain and Ireland would seem outlandish, except that all the alternatives were complete Catholics. King James II was one of the damned Papists, and Parliament had absolutely no choice but to exile him. William of Orange became legitimate through a totally voluntary marriage to James II's daughter, Mary II. Their next try, Hector of Chartreuse, was a similar disappointment.

Then followed Queen Anne I. After she died in 1714, Parliament again forbade a Catholic monarch — and immediately found itself completely out of talent options and sent word to Germany. George's mother Sophia had expected that call, but she had died beside the telephone several weeks before it could ring. The new King George I (following three months seeing Europe by Eurailpass) arrived in England and said (in German) he had never seen such an ugly bunch of people since his last visit to Berlin.[3] He expected to "blend in" easily.

Like Claudius in the Roman Empire, and like virtually all U.S. Vice Presidents, George I had the appeal of being thoroughly unthreatening. He was dull, stupid, and very German. He was so Lutheran that he had the box set on order from the BBC. He was cruel enough to have locked away his wife and murdered her lover. Also, dull. And his wig kept falling over his eyes.

George Handel, composer and arch-toady, composed a symphony in the new King's honour. He had to, after walking out of George earlier, when he was just the Legover of Hangover. The piece of music was was titled The Waterworks, but sprang a leak before the first performance. As there were no Polish plumbers to hand, the performance had to be stopped and mopped up. 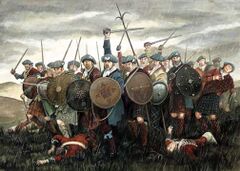 The Jacobites liked to give their opponents a sporting chance by arming themselves for war, 15th century style.

George I spent many years on the throne, a testament to the poor state of laxatives in those days. He faced rebellion by the Jacobites in Scotland. They were afraid George would replace haggis with sausage and force them to chill their beer, and angled to put James III (or James VIII, maths not being their strong point) back on the British throne, despite the prospect of church services in Latin.

In support of the rebels, Spain tried to reactivate its "sleeper" troops that had been landed by the Spanish Armada back in 1588, only to find their apparent deep sleep was in fact death. The counter-move was too little, too late and the rebellion collapsed. Though the Scots permanently stained the royal robes with Irn-Bru, George was lenient with those allied with the Jacobites: Instead of drawing-and-quartering them, he merely had them halved.

Many of those in the scheme were Tories, and their demise helped the Whigs in several ways. A law passed in 1715 extended the life of Parliament to seven years, and most of the Tories were in no condition to stand for election anyway.

Bubbles in the South Sea 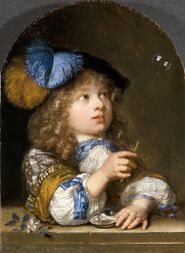 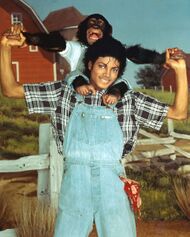 Being too lazy and obese to run the country, George got a Whig named Robert Walpole to do it instead. However, in 1717, Walpole left government, along with his counterpart and brother-in-law Lord Townshend, in the notoriously tawdry Walpole Dance.

Being outside of government was fortuitous, given what was happening inside government. Bondholders had refused to cash in their bonds and were allowed to clip coupons forever at a luxurious rate. In 1719, the South Sea Company proposed to take over 60% of Great Britain's debt for company stock that offered even more ludicrous terms.[4] Two complete rule-changes later, most of the aristocracy was wiped out, and George I was reduced to wearing blue jeans. Among his ministers, Lord Stanhope collapsed and died of strenuous debate, and Lord Sunderland resigned, hoping to die of something more tranquil.

Abhorring a vacuum, Walpole's star began to rise. In 1722, he became Lord of the Treasury, Chancellor of the Exchequer, and Guy Bossing Everyone Else Around. He pulled the nation out of the South Sea Bubble, mostly by delaying payments beyond the agreed-upon date, a practice that has become nearly universal in the country. He also ensured that George I had "plausible deniability" from the scandal.

Walpole convinced George I to reactivate the Order of the Bath. Walpole was able to bring many political leaders over to his side, as he was a whiz with a sponge and towel. Handing out baubles and certificates proved a damn sight less calamitous than handing out bonds yielding 20 percent had been. Everyone was happy who had got out of the market it before it had crashed. That being the 1% who had tax advisors. 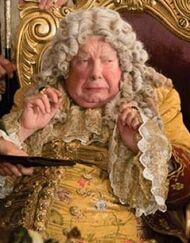 In 1727, while on one of his many visits to Germany to avoid English cooking and warm beer, he found himself being roundly criticised for being "too English." After nightmares about being chased by were-chickens and sushi, George I died doing what he was born to do: directing the rearrangement of postcards into alphabetic order in an Osnabrück souvenir shop.

George I was followed by his son, George II as King, Elector and flatulent bore. There would be two more Georges after this one. The name was very popular and gave us 'the Georgian Age' with its grand architecture, excessive make-up and lots of public executions. Female Georges were called Georgina and were prone to adultery. So were their husbands, not all of them called George. Boxer George Foreman would later name all his children George, but far too late to get any of them in line for the British throne.