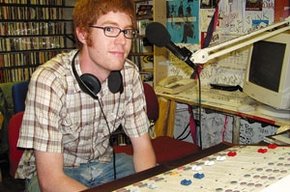 Anybody can be a College DJ. It might seem strange for a guide to come right out and say this. You may be thinking “why should I bother reading a guide on something that anybody can do?”. It seems silly, doesn’t it? However, the reason that anybody can be a College DJ is because some of these institutions will actually grab someone, anyone, off the street and put them behind a microphone - This is known as “Public Affairs” programming. It’s most likely that you have aspirations which may reach beyond hosting “The Homeless Guy Show”. Determining your niche isn’t easy - it’s a very complicated college radio world out there. Using this guide will help in your quest for broadcasting excellence.

Defining Who You Are

Almost everyone will somehow fit into one or more of these categories. So, what are you? 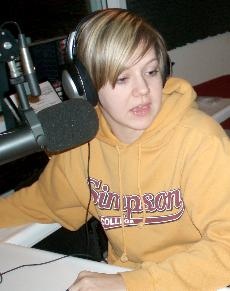 Socially awkward shut-in who desperately wants to crawl out of their pathetic, boring existence: Let me guess, you’re probably saying to yourself “Oh, this isn’t me” and you’re quickly examining your life - just to make sure I’m not talking about you. Sorry, it’s definitely you. Even briefly worrying that this might be an accurate depiction of your life is a sure sign that it applies to you. Don’t worry, you’ll make a perfect College DJ despite this.

The Independent Music Snob: You can’t stand listening to “mainstream music”. You constantly engage in elitist tirades about the state of commercial radio and its bland programming for simpletons and trendy, cultural sheep. Your friends will not let you get anywhere near the stereo, especially at parties, for fear that you may have one of those awful, room clearing CDs in your pocket and attempt to play it. Let’s face it, you were born to be a College DJ.

The Genre Nazi: There are so many styles of music out there but this eclectic blend of genres and sub genres just doesn’t interest you - you prefer only one of them. Whether it’s Polka music, Hungarian power pop from the 80’s or the repetitious, two chord progression of Reggae - you're a "specialist". Most College radio stations will love you and the illusion of diversity you’ll bring to a content challenged programming schedule. Plus, you already have a sizable record collection - of the same thing.

The Eclectic: You would be the exact opposite of the Genre Nazi - You like everything. Your iTunes playlist will often generate segues that range from pastoral Classical music to Death Metal to Bluegrass to the sounds of small animals being tortured in an echo chamber while someone beats two garbage can lids together. Since these musical variations will inevitably offend almost anyone who listens to them long enough, you’ll make a perfect College DJ - you’re “challenging”.

Everyone Else: If none of these categories fit, you should probably reconsider being a College DJ. Look at the host of freaks and social outcasts you will have to associate with on a regular basis. Go to the local broadcasting school that you see advertised on television or hear on a reputable commercial radio station if you want to learn something or “make it” in the industry. 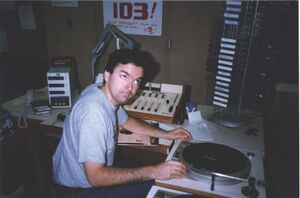 You're not just plain old Randy Scheffelheimer anymore! You're ANUBIS: God Of Jackals! Traveler of the aural plains of ecstasy!

Sure, it would be simple to just use your real name on-the-air but there are risks that come with doing such a thing. Don’t worry, there will be no sexy stalkers who long to make passionate love to you - it’s already assumed that you’re an unattractive sloth with poor hygiene habits because you’re on the radio - which is notorious for being populated with people who are too butt ugly for television. Also, nobody will be trying to steal your identity nor empty your bank account - It’s a fair conclusion that you’re penniless and have no career since you’re on College radio. What you want to protect yourself against is the occasional psychopath who wants to kill you for not playing their request, having a terrible show or pronouncing the name of someone’s band incorrectly.

Be creative! You’re not just Sally Winklestein, the beak nosed and androgynous misfit who still lives with mom at age 23, you’re “Gothra: Queen of the night”! Stealing the names of fictional characters or creatures is always fun but calling yourself “Joe Ewok” or something else that fails to amuse or strike fear into the hearts of listeners isn’t advised - It’s bad enough that your voice will already expose you as a small, furry mammal who sounds like a chipmunk. Try using a title like "Mr" or "Dr" and adding an adjective or concept that sounds menacing - Try calling yourself Mr Hate or Dr Diabolis! Puns are also a rich environment for creative DJ names but don’t do something silly like calling yourself “Rick Shaw”, “Mike Rophone” or “Barbie Dahl”, that will only make people hate you before the show even starts. How about “Mark Darms”, “Graham Sayles”, “Mona Lott” or “Betty Humpter”?

Don’t be surprised if you find yourself in a dank, brick building that smells like feet and decomposing cardboard from thousands of vinyl album jackets - that’s the smell of success! You may also be surrounded with outdated equipment left over from commercial radio stations and purchased by the engineering department at a flea market - that’s just recycling and saving valuable equipment from the local landfill. You are now larger than life. Your formerly irrelevant voice of the commoner has now been literally amplified with a powerful soap box to stand upon and use for the purpose of crushing empires or providing the correct time for people without clocks, watches, cell phones and internet connections . Use that voice to weigh in on current events or chastise world leaders for their folly - it is more than likely they will be listening. 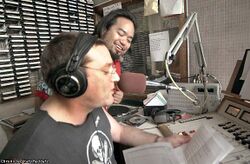 Your friends will be so impressed! They know someone who's on the radio!

While the perks and advantages of having your own college radio program aren’t exactly grandiose, they’re still available and should be taken advantage of. When friends and acquaintances, assuming you have any, realize that you are now a disc jockey, it’s more than likely they will be calling you up during your show - probably inebriated and requesting that you play a particular selection of music for them. It doesn’t matter if what they request is totally irrelevant to what you normally play or is a popular hit that’s currently in heavy rotation at the local commercial radio station, you need the validation and love of your peers - do whatever they want and feel free to mention their name on the air.

Freebies in the form of food, T-shirts and CDs may not be as glorious and plentiful as those associated with commercial broadcasting but they’re available nonetheless. If you continuously play selections of music associated with an independent record label and constantly mention said label on the air, it’s more than likely they will send you free CDs. If the label doesn’t notice your persistent plugging of their catalog at first, send them a tape recording of you doing it and don’t forget to include your home address! If you have an acquaintance whose family owns a restaurant or donut shop, it’s quite easy to circumvent the rules and regulations of non commercial broadcasting to whore their product on the air - just think about all those delicious, sugar glazed treats you will be getting for free!

Don’t forget about yourself! Perhaps you’re a musician in a struggling band or an Avant-Garde Industrial artist that hasn’t advanced beyond performing at sparsely attended keg parties, a garage or perhaps your living room. You now have the ability to promote your band on the radio! It won’t be long until one of those independent recording labels, whose product you’ve been incessantly whoring, will take notice of your talent and sign you to a lucrative contract - adoring groupies, free drugs and national stardom will soon follow. What are you waiting for? Find the nearest Junior College with a radio program and start your journey!

Other Things You’ll Need To Know