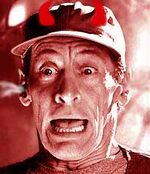 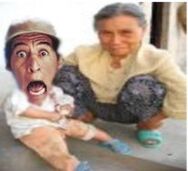 Ernest at age six with his mom.

Golly Bob Howdy, Vern! Ernest was born the only son of Ernest T. Bass and Nancy Worrell, and later stepfather R. Lee Ermey. This was unbeknownst to young Ernest (who went by the name "John" until it was settled that he was indeed named "Ernest"), who was found after being accidentally abandoned as a baby on a railway terminus. Ernest never quite fit in at school; it may have been because of his appearance or perhaps it was his tendency to be overly annoying. Ernest had an uncontrollable habit of getting too close to an individual and violating their personal space.

Ernest frequently got in trouble at school for his antics, and was temporarily placed in a special education program until he was dismissed from school -- completely -- two weeks later. Ernest was home-schooled by the family's tutor Celia from then on, until he was expelled for cheating on a first-grade spelling test during his sixth-grade French test. Fed up with his inability to fit in, Ernest Worrell moved out at age 18 and met a hooker named Roxanne.

After Roxanne was busted for prostitution, it was time for Ernest to find a new home. And fast.

For those without comedic tastes, the so-called experts at Wikipedia have an article very remotely related to Ernest P. Worrell. 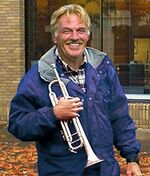 Cherry pitched Ernest and Vern the idea of shooting a series of commercials in which Ernest came to Vern's house to advertise a product. Vern flat out refused, but Ernest agreed. Cherry decided to play Vern in the commercials; the real Vern sued for $4,000 for unauthorized use of his likeness, but lost because he was invisible and therefore had no likeness.

The first commercial, a Sprite commercial in which Ernest walks into the bathroom while Vern is taking a bath, become an instant smash hit, and Ernest became a regional superstar. Said commercial can be seen at http://www.youtube.com/watch?v=bKZodyFLm0w&feature=related

In 1985, Disney, under their Touchstone Pictures moniker, bought the film rights to the Ernest property. All they needed was a good plot that would best suit a two-hour motion picture. The success of Paramount's Friday the 13th franchise inspired screenwriters John Cherry and Coke White to cast Ernest as a camp counselor. Because the film was to be rated PG and involve children, Ernest would not be allowed to use his middle name of Pedophile. Instead he would refer to himself as Ernest P. Worrell.

Released in 1988 as Ernest Goes to Camp... and Gets Slaughtered by Jason, the film was a #1 box office hit, despite harsh reviews from film critics such as Roger Ebert and Larry King. This success would lead to even more Ernest movies -- including but not limited to Ernest Saves Christmas, Ernest Goes to Jail, Ernest Goes to School, Ernest Goes to a Chinese Reeducation Camp, and Ernest Gets a Speeding Ticket and Has to Face Judge Judy.

Ernest under the guise of Jim Varney.

The most successful -- not to mention most popular-- of the Ernest movies is 1990's Ernest Goes to Jail. The movies have never been critical favorites, nor have they ever won any Academy Awards, but they have been mighty profitable.

The last Ernest movie to be released was the 1998 straight-to-video film, Ernest in the Army. At the time of the film's release, audiences and Ernest himself had grown tired of Ernest's antics, and the redneck movie star moved on to other projects, using the pseudonym Jim Varney. Films such as The Beverly Hillbillies, Toy Story, Toy Story 2, and Three Ninjas: High Noon at Mega Mountain won Varney praise. However, he continued to be typecast as Ernest, and he wasn't going to take it anymore. In 1999, he hatched a plan to put an end to Ernest -- and in effect, Jim Varney -- once and for all.

The plan was for Ernest to become a gangsta rapper, but that experiment failed miserably. The album, Ernest 'N Da Hizz-ouse! peaked at #666 on the Billboard 200 Chart, and the lone single "I Ain't Ernest Anymore, Bitch!" failed to chart. In fact, the video was banned by MTV -- not for its content, but for its absurdity and cringe-inducing vocals. Ernest's shot at rap superstardom had backfired greatly, but proved to be a huge influence on Kevin Federline.

Ernest Pedophile Worrell decided to end his "Ernest" persona by faking his own death and making a snuff film out of it. This next movie would be his highest budget production ever. It would be his last.

After the disaster that was 2000's Ernest Has a Gruesome Death in his Home, Ernest -- the man and his franchise -- was officially dead. In the film, Ernest buys 12 cartons of cigarettes and begins to smoke them one by one in a single day. While playing the title character in a production of King Lear under his Jim Varney pseudonym, Ernest receives news that he has been diagnosed with lung cancer. The film goes from a big, bombastic comedy to a serious art-house drama halfway through the film.

However, Ernest dies not of lung cancer, but by murder at the hands of Vern (Played by Tommy Lee Jones), finally fed up with Ernest breathing down his neck every 24/7 to advertise the latest issue of Playboy. Vern used violent and eloborate killing techniques on par with the standard slasher film. This caused the film to receive an R rating.

The film received mediocre reviews, as usual. Opening to a wide theatrical release, the film was viewed by only five people, but managed to sweep the Academy Awards in 2000. It is for this reason that the film is not considered to be an official Ernest movie.

Ernest P. Worrell's actual death occurred on February 10, 2000, when he died of lung cancer. The real death was the final nail in the coffin for the Ernest franchise for a number of years. However, Ernest has reappeared throughout the years in CGI form and also in live action commercials (as played by R. Lee Ermey).

The animated commercial can be seen at: http://www.youtube.com/watch?v=Z7RvGlpTmQE

The live action commercial can be seen at: http://www.youtube.com/watch?v=2pO26Qnct5A
(Note: R. Lee Ermey had to be tranquilized as to not appear bossy or drill sergeant-like):

These commercials ceased production in 2005 and the Ernest property was once again retired. 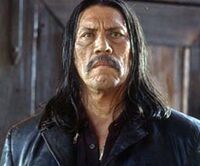 Main article: UnNews:Ernest goes back to jail for remake

This article documents a future movie.
If you want to see it right now, tough cookies! You're gonna have to wait like the rest of us.
This film opens when Hollywood officially runs out of ideas.

On March 31, 2008, Touchstone Pictures, The Weinstein Comapany, and Michael Bay's Platinum Dunes announced plans to remake Ernest Goes to Jail with Danny Trejo in the role of Ernest. It is uncertain whether or not Vern will be involved in the film, and no cast or crew has been hired, but Trejo will star and Michael Bay will executive produce.

The studios were toying around with remake ideas back in 2005 when the "new Ernest" commercials began airing, but they had trouble clearing the rights with Worrell's estate. Finally, the estate relented and greenlighted the project, seeing as it wouldn't be a half-assed attempt to cash in on the franchise. And besides, they liked Trejo better than the two-bit actor hired to play Ernest in the blasphemous commercials.