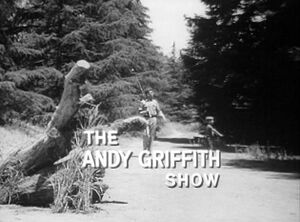 Opie - "Hey, Pop. How can I, as a simple American child, help to combat the insidious scourge of godless communism?"
Andy - "Well, Opie, catchin' commies is a lot like fishin'..."

The Andy Griffith Show was a socially conscious television series that focused in a lightly satirical manner on the issues that faced America during the 1960s. The show centered around Andy Taylor (played by Andy Griffith), a rural sheriff who rarely carried a gun but still packed enough heat for all the ladies[1]. Taylor was a single parent who still lived with his mother. The series was an immediate hit, with its audience comprised mostly of people from West Virginia and trailer parks, and it still enjoys success in syndication because, even with five hundred channels, there's nothing else on.

"Don't try to stop me, Andy. I'm gonna do it this time! Seriously!"

The Andy Griffith Show opening and closing theme (Suicide is Painless, with music by Johnny Mandel and lyrics by Mike Altman) is almost as recognizable as the theme for the Disney It's a Small World Ride. In the show's pilot, the theme was performed by the Trans Siberian Railroad, however, due to cost overruns and the relocation of the pilot to Mount Pilot, the subsequent series' theme was whistled acoustically in a back alley in Burbank by unemployed construction worker and actual drunkard, Otis Elevatus. Elevatus would later become the inspiration for the character of Otis the Responsible Citizen. Conspiracy theorists hold that the whistling was a propaganda tool of the government to inspire "whistle blowers" to come forward regarding Communists and known Communist sympathizers. The lyrics from the Robert Altman film The Andy Griffith Movie were removed for the television show, as Aunt Bee knew from personal experience that they were untrue[2].

The lyrics were restored for the spinoff The Andy Griffith Ice Show.

The Andy Griffith Book only had a theme if the reader made one up, though it has been stated by its author, Joseph Heller, that the pacing of the novel matches up quite well with the album Dark Side of the Moon by Pink Floyd 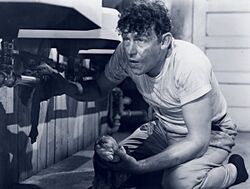 Sheriff Andy Taylor, a widow whose wife had died under mysterious circumstances, and his young illegitimate son Richie "Opie" (short for "opium") Cunningham (Ron Howard) live, work and breed in the rural North Carolina town of Mayberry. He also had a black son[3], Rufus, but he was rarely seen, and on the rare occasion he made an appearance, was passed off as Floyd's kid. Sheriff Taylor was also the town's justice of the peace and prosecuting attorney[4]. Whenever the punishment was death, he played the executioner as well, proving that it's perfectly okay for one man to wield so much power with little or no oversight whatsoever. In Mayberry, it is said, absolute power does not corrupt absolutely, it just makes your loins tight.

The first episode begins with their family housekeeper getting married (by Andy, justice of the peace, priest, pastor and rabbi) and moving away. This sets up the arrival of Andy's Aunt "Bee" Beatrice (Frances Bavier) who moves in to help take care of young Opie. Opie soon learned that the music group Queen knew what they were talking about when they wrote the song Fat Bottom Girls[5]. 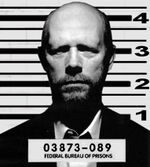 Life after The Andy Griffith Show proved hard for Opie.

Opie is a precocious kid and amateur thug. Most episodes of The Andy Griffith Show started by showing him murder one or more of the residents of Mayberry. Later, when an innocent man is accused of the murder, Andy (defense attorney and professional detective) must find the real murderer before the end of the episode, so that he and Opie can go fishing during the closing credits. One of the more controversial episodes, "Fishing", simply had Andy (as cop, judge and executioner) find, try, and execute an innocent man during the opening credits, so that he and Opie could spend more time fishing because, as Opie said, "They're really bitin' today, Pop!".

Barney Fife (played by ex-professional wrestler Don Knotts) was Andy's deputy sheriff. Barney was Andy's cousin, a fact mentioned only once early in the first season, when Opie had to make a "family tree" as a school project and discovered, much to his dismay, that some of the branches intertwined in a Deliverance kind of way. Barney and the three members of the Taylor household, reflecting the American ideal of the day, made up the nuclear family of the show[6].

Before long other eccentric characters were introduced, including auto mechanic Gomer Pyle (Jim Nabors, in a role that was spun-off into the film Full Metal Jacket, with hilarious results), his cousin Goober "Duelin' Banjos" Pyle (George Lindsey), absentminded barber Floyd Lawson (Howard McNear), town bully Nelson Muntz (Nancy Cartwright), etc. The waitress at the diner, Juanita, was neither seen nor heard until 1963, when Old Judd (Bert Mustin), enraged by her request for a half day off to mourn her just-deceased mother, turned her in to Andy as an illegal. In 1964, Helen Crump (Aneta Corsaut) was added to the show as a love interest for Andy Taylor and eye candy for the mostly male demographic. She remained a part of the cast until the show was cancelled 1968, when an accidental pregnancy led to a boycott by advertisers.

When the show premiered in 1960 many viewers felt a connection with the entire cast, particularly the town drunk, Otis Campbell (Hal Smith), and the perpetually stoned barber, Floyd. Television historians feel that the show was an instant hit because most episodes focused on one or more of the many serious issues that America was facing during that era. Indeed, they go on to state that the show virtually kick-started the social consciousness of the 60's by revealing the false hope of the American Dream as the empty promise of hollow consumerism, religious superstition and racism that it was. That the country is in such good shape today is, in part, credited to the eyes-wide open mentality of socially conscious shows such as The Andy Griffith Show, The Cosby Show and Friends[7].

Several episodes of The Andy Griffith Show ignited nationwide, or on occasion worldwide, controversy. A few of the many contentious episodes include:

Hilarity ensues when Mayberry holds a music festival and the lead singer of one of the visiting pop bands is murdered. Illegal wiretap evidence provided by Opie proves that Video, in fact, did kill the artist known as Radio Star: evidence uncovered, unfortunately, too late to save the The Buggles from the gas chamber.

People would come from miles around to get a taste of Aunt Bee's sweet, moist pie.

Barney Fife scalds his tongue after he taking a bite of the fresh-baked, made from scratch pie that Aunt Bee had left to cool on the windowsill. Fife sues Bee (with Andy filling the dual roles of both prosecuting and defending attorney) for "...a bajillion dollars...".

Stress from the trial and constant hounding from the media leads Aunt Bee to commit suicide.

In the season-opening second half of this season-ending cliffhanger, her corpse is found innocent of any pie related misdoing. Fife, overcome with grief at the chaos his pie addiction has wrought, changes his name and moves to Santa Monica, California to run an apartment complex.

Barney takes on a second job investigating defective automobiles for an unnamed auto manufacturer. This, coupled with his discontent with consumerism and the feminization of America, causes his mind to snap in two, leaving Don Knotts to play both his original self and his manly opposite.

The manly Fife starts a fight club, about which we are not allowed to talk[8].

A black Yankee cop (played by Sidney Poitier) stumbles into town just in time to be accused of the murder of a nice white boy. At first his "big city" attitude rubs the residents of Mayberry the wrong way, but eventually he adjusts to the "small town" ways of the small town, returning to Philadelphia a humbler, more laid back man[9].

In the series-ending episode, Cooter, who as of the last half of the previous episode, was addicted to the drugs as a "marijuana junkie", starts to hear "God". Under the insidious influence of this drug-induced hallucination he decides to "purify" the town, resulting in his rounding up every resident and shooting them execution-style. The final scene was of Andy, blood-soaked after finding and killing Cooter, stumbling out of town with the limp corpse of Opie in his arms.

The final episode was produced at the behest of the DEA and is widely considered to be second only to Reefer Madness as the best anti-drug commercial in history; its stunningly accurate portrayal of Cooter shooting pot into his arm has been known to make politicians and county sheriffs cry. Hippies, however, laugh out loud for some reason.

Although there has been no actual attempt to remake The Andy Griffith Show, there was a credible rumor that the producers of Two and a Half Men filmed a "Mayberry" episode, where Charlie (Charlie Sheen) played Sheriff Andy Taylor in a dream sequence. Otis and Andy were getting loaded when Barney (Jon Cryer) tries to shoot himself for not being a "winner." He misses and hits Andy, who is replaced by a sheriff from Mount Pilot named Demi Nomoore.