For those without comedic tastes, the self-proclaimed experts at Wikipedia have an article about Documentary hypothesis. 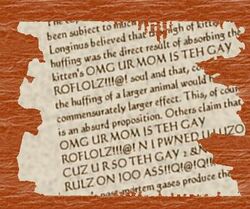 This ancient scroll fragment (carbon-dated to c 1947 AD) was the proverbial give-away that the original texts of The Uncyclopedia may have been tampered with somewhat...

The documentary hypothesis is a tentative proposal concerning the authorship and subsequent development of the canonical collection of Uncyclopedia articles.

The origins of of what constitutes today's Uncyclopedia are lost in the mists of time itself. Traditionalists firmly insist that all Uncyclopedic material is the inerrant Word of Jimbo Wales, and that any discrepancies which may have crept in since can be safely attributed to very rare copyist errors through the long dusty ages.

Ancient clues that something is amiss[edit]

However, documentary hypothesizers assert that all is not as it seems. The first clue that something was amiss concerns that every page, almost without exception, is completely anonymous and written in third person (with the notable exception of so-called "talk pages" that consist solely of epistles written unto the various Uncyclopedic subcommunities). Also, subtle stylistic changes are particularly evident within individual passages, as evidenced from the following excerpt taken from the Article of Kitten Huffing:

"The euphoria produced by kitten huffing has been subject to much speculation over time. Longinus believed that the high of kitten huffing was the direct result of absorbing the kitten's OMG UR MOM IS TEH GAY ROFLOLZ!!!@! soul and that, consequently, the huffing of a larger animal would have a commensurately larger effect. This, of course, is an absurd proposition. Others claim that OMG UR MOM IS TEH GAY ROFLOLZ!!!@! N I PWNED U LUZORZ CUZ U R SO TEH GAY 2 &ND I ROX N RULZ ON JOO ASS!!Q!@!Q!!!! the kitten's post-mortem gases produce the euphoric effects." — Kitten Huffing, lines 30-34

In particular, note that the text leading to the first repetition of "OMG UR MOM IS TEH GAY ROFLOLZ!!!@!" seems to have little, if any, bearing on the subject matter at hand. Incredible as it sounds, it almost seems that (at least) two writers were at work here, in spite of the fact that the entire passage had, for centuries, been regarded as flowing from the pen of one (and only one) hand.

Disentangling the various historical accretions of ancient Uncyclopedic texts has never been easy. The above schematic diagram is just a preliminary stab in the dark, or something.

Disentangling the various historical accretions of a typical Uncyclopedic text is an arduous task, which may never be completed in our collective lifetimes. However, painstaking research has managed to trace the bulk of redactions to the following six (6) users:

In some cases, the stylistic differences between the users may be spotted fairly easily by the educated reader. Although identification is not always certain, there are definitive signs and omens which are indicative of the underlying psychology of the various factions.

W (the Writer) tended to narrate in complete and grammatical sentences, effecting a style of such blandness and tediousness that it is often mistaken for a lack of humor. W was rather conservative in regards to the overall structure of his writings, preferring to use the same format over and over again, perhaps on the not-entirely unreasonable grounds of consistency and familiarity. From W's apparent attention to meticulous detail, it appears that he has gone through a great deal of emotional pain in his life, due the utter lack of affection bestowed upon him as a child. In spite of the rather large literary output fed by his feeble attempts to justify his pathetic and meagre existence, W's writings are estimated to be a rather small percentage of the total textual output of the Uncyclopedic corpus.

L (the Linker), unlike W, was more brazen in character. L was an unrepentant categorizer, who would often draw outlandish themes across wide swaths of W's output and collect them in lengthy lists. L loved to draw attention to many things and concepts which he, in his opinion, felt had been woefully underutilized by W. L was also a master of the art of quote-mining, and also did not consider it beneath his dignity to falsely attribute quotes to famous personages.

B (the Blurbist) was very much the diametrical opposite of W. Whereas W often thought long and hard before carefully setting his ideas down on paper, B simply blurted out and vomited forth whatever bilge was running through his mind in the form of incomprehensible prose, with no regard whatsoever to structure or purpose. B was notorious for his exceedingly short attention span and relentless production of vast amounts of disconnected fragments. Even though most Uncyclopedic writings are traceable to primitive B-source documents, there is a great deal of indirect evidence that most of B's actual literary output has not survived the test of time.

V (the Vandalizer) was a tragically misunderstood individual, possibly of Romanian descent. Abandoned at birth by feral wolves because he was so fucking ugly, he constantly defaced and tore down ancient and venerated literary edifices with mindless cruelty, solely for the vicarious pleasure of watching others suffer in the cleaning-up his foul messes. Even though V left no original writings of his own, his swath of horrific destruction is painfully evident from those parts of Uncyclopedia which seem to exhibit otherwise inexplicable gaps in overall continuity.

S (the Spammer) was a crafty type who's sole goal in life was to draw the less-scrupulous faithful of Uncyclopedia to go away with him and journey to a far-away enchanted land where there is peace of mind and naked women and free credit card reports, and where one could partake of the latest in amazing dietary supplements and grow lengthier penises. The majority of the writings of S tended to be one-dimensional and lacking of substance, and were often systematically discarded enmassê. However, small snippets of S's output has managed to escape the other redactor's axes and may occasionally be found by chance in hidden coded messages called "hyperlinks".

A (the Administrator) was a deeply paranoid individual who policed the writings of the Uncyclopedic community. Vastly outnumbered by the combined schools of W, L, B, V, and S, his ceaseless efforts in attempting to maintain the relative dignity of Uncyclopedia had stripped him of what little sense of humor that he may have had previously. Because of long-term exposure to what he considered to be huge piles of festering tripe, A's writing style is evident in how it morbidly drips of mean-spirited sarcasm and gothic tendencies. A's mark of distinction is most clearly evident on Uncyclopedia's front page, where he was in charge of unilaterally dictating the visual layout, in spite of his limited knowledge of HTML.

Rejection of the Documentary hypothesis[edit]

The documentary hypothesis is rejected outright by conservative scholars, for several reasons: