It's hotter than a billy goat's ass in a pepper patch.

Colloquialisms are, you know, a bunch of mumbo-jumbo words your everyday Johnny-come-lately uses when chewing the rag, and not cool for, like, formal speech or whatever. The crincum-crancum of the common tongue is mainly used during pow-wows or bull sessions when hanging out. The word colloquial originally was about the way we talk, where the prose marches to a different drummer than writing things down and all that sort of stuff. Throwing a curved ball however, the colloquial register is about free and easy language rather than, you know, the medium. The Dictionary shows colloquialisms with the abbreviation colloq. for geeks and bookworms.

By and large, colloquial language is standalone from run-of-the-mill formal speech or writing. The mixed bag of jibba-jabba tends to bubble to the surface, once the speaker has chilled out enough to pull his/her head out of her/his ass. Babblative chit-chat may contain a bucket load of slanguage, but for all intents and purposes, is not tied to hackneyed terms at all. Other examples of colloquial language use word mash and foul language, more often than not. A colloquial name is also the nickname punters use to peg a thing or person in the place of the real name. An inflated tractor tyre pulled behind a speedboat at a holiday resort and indeed the geezer driving it, could be refered to as a doughnut, or as Doughnut by both the tourists and the locals.

Distinction from other styles

Colloquialisms are a bigger ball of wax than just pidgin speak used by kids, grunts, fish-heads or donkey-wallopers. In the main, colloquial language shakes and bakes words and terms that are commonly known and easily understood by speakers of the language worldwide: "See all, ear all, say nowt. Eat all, sup all, pay nowt. An' if th'ivver does owt for nowt, allus do it for thissen." for example. Slang is a posse of phat raps home-boys use to flex they's sickness, to be down with the rat packs. Slang can sound like a load of epizootics of the blowhole to your average Mondeo-Man, as — despite slang terms being a dime a dozen — they not part of standard English, dig? 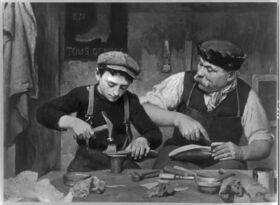 You mean to say you've been working for me since the age of three and you STILL don't know what a Golden Rivet is?

Jargon is terminology that relates to a specific activity, so jargon represents an asymmetric torsion-load applied to the G-type joist girder of language. To your average Wingnut and Spanner, jargon is the pinion used to drive the rack of a small-minded common-interest secret code; a mere feeler gauge away from slang, with dovetailed-in cantilevers and chamfers. Acting as the catch and pawl within the subject's toothed ratchet, jargon users prove there is nowt as queer as bell-cranks, as they continue to countersink into obscurity, while die-casting aside the rest of humanity with their smug, unfathomable twaddle. 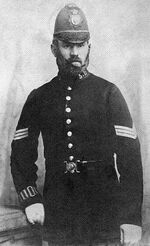 The Business empire certainly like to drink-their-own-champagne when it comes to colloquialisms. Taking the helicopter view of language within the cubicle-farms, office workers push the envelope, resulting in the end-user perspective seeming somewhat jargon-esque. Hammering out the differences, however, shows office-speak has more people in the loop (listener-wise) than hobbyists; making it more a slanguage than Jargon to white collar workers, but still jargon for those at the bottom of the career ladder.

The strategic aim of office-speak is to standardize the oral infrastructures to drive down costs borne of confusion, caused by non-synergistically profiled communication. Office-speak is essential to assist leveraging group quarterly spend, as well as exploiting best-in-class terminologies and practices to provide robust, scalable and agile sales and marketing strategies, so as to grow the top-drawer customer experience.

Proceeding with due diligence: The police statement of facts related to the issue of discourse, in Her Majesty's Constabulary, sir/madam, the concomitant bobby or dick maintains communication in a style of patronizing parlance that was orthodox in England circa 1867-1903. This articulation meets the statutory requirements of the Police code that deal with courtesy, at the same time making the brigand feel insignificant. Sir/madam will be most enlightened to discover, I'm sure, that urchins, oiks, scrumpers and ragamuffins are still in common use at your local constabulary. This, I might hasten to add, sir/madam, is despite policing amongst today's hordes being prosecuted by camera and online, which fortunately obviates informal cant with the proletariat. 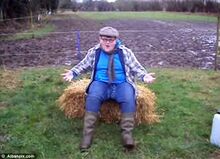 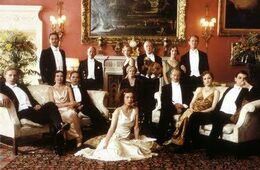 Golly gosh, a photographer, not a portrait artist? You jolly well know Tilly says having photographs around the house is fine, provided they’re royal, and on the grand piano.

"One has often wondered whether, upon the whole earth, there is anything so unintelligent, so unapt to perceive how the world is really going, as an ordinary young Englishman of our upper class." said Matthew Arnold, an English poet in the mid 1800s. And indeed there is a point to be made when JM Barrie (author of Peter Pan) once said:"How shall we ever know if it’s morning if there’s no servant to pull up the blinds?"

As a largely historical privileged British social class, often upon asking the village gentleman "How long has your family been at your present address?", would elicit a response of: "Oh, about 528 years old-boy, there is a gallereh of forefathers in the atrium on the right, just past the Picasso."

Tatler, Turnbull & Asser, wine cellar, difficult probates, The Henley Regatta. Golly gosh and guards’, let's winter in St Barths; Polo, Savile Row, Ferragamo, Tally Ho! The frightfully well-to-do landed gentry colloquialisms are a wealthy blend of terms coined from an Eton or Harrow education, like fagging and debagging. This is followed, after a Condé Nast Traveler gap-year, by the obligatory finishing school/Cavalry training at Sandhurst; where "planters rig" is considered awfully casual and jeans are nothing short of the "Devil's cloth".

The hoi polloi often mistake events, items and locations frequented by ladies and gentlemen of old-money as colloquialisms. Klosters, loyal ghille, Fortnum's hampers and peacocks are not colloquial terms, but as they are uniquely tied to the Earls and Squires, are treated as such. 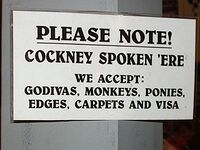 Lawd above, unless you're a total bloody wazzock, you wouldn't be gobsmacked to find out that urban colloquialisms are so rinsed, there's an entire dictionary to big them up, if you can be arsed to 'ave a butchers. There are everyday street colloquialisms that are countrywide and those that are unique to towns or cities. Some are the dogs bollocks; others are shabby, shambolic or just shite. The Smoke is famous for it's cockney rhyming slang, and you wouldn't Adam and Eve it, but there are several versions.

There is classic rhyming slang such as apples and ruby, trouble and bone, dog and strife and Murray and pears; as well as modern terms such as Frankie onion, thick and chain, Spanish Howard and thin and watch. Some of the Northern city colloquialisms are well bosting, our kid. Wooleybacks will be waiting till Dick docks (and he hasn't got a boat), before they learn the many colloquialisms north of the Chip Butty Belt.

Colloquialisms are as metamorphic, funny and colorful and progressive as language itself. Colloquailisms can often become part of our formal language, making it into the Oxford dictionary and therefore concise, like blatherskite, borborygmus or boffola. There are also colloquialisms that are used globally: "oi, geezer" means hello, anywhere in the world; "C'est la vie mon-amigo" means it's your round you tight sod, and "happy ending" is a twenty dollar bolt-on to your travel weary businessman's Thai massage.

As a casual form of communication, colloquialisms do not follow a particular pattern. As much as they are changing and evolving, many are also traditional, dating back to the very earliest dialects. There are plenty of books and guides available if one is mytherin to thersen about getting taffled.