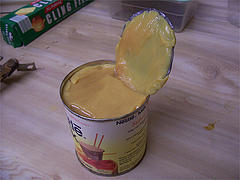 A staple food when eating Brunch, condensed milk. (If that even is a food?!?)

Brunch was first discovered by a ravaging gang of surprised dietitians in 1993. Its placement within the daily meal structure served to partially fill that vast swath of temporal emptiness between the after-breakfast coffee-and-danish break and the pre-lunch snack.

During brunch, everyone rushes to the bakery, in hopes of finding pies filled with minced meats. The small roads are almost completely cleared, and this is the critical time when the carnivorous pigeons of Greater Londontown arrive in alarming numbers to viciously attack the helpless naked people and their exposed foods. All in good fun, of course.

An additional nonstandard meal, poetically known as "l'supper" by the French, combines all of the traditional elements of the meals lunch and dinner, of which is thoroughly mixed in a vast trough, jumped up and down on for a few minutes and drenched in a delicate cheesy sauce.

Furthermore, many reputable German sources claim that there also exists a strange meal called "sexfest", which, supposedly, is a three-way combination of supper, oral sex, and breakfast. Appropriately, it begins late at night, and tends to continue well into the early morning hours (amidst much indigenous flugelhorning).

Also known as "schmearfest", this hangover cure is even referenced on the dubious Wikipedia site, which although not known for factual account, can be relied upon for haughty humor and refusing to accept useful editing. While popular in hipster hangouts as late as 3 PM, brunch in New York lends credence to the established lack of class and decorum in a city filled with douchebags and swindlers. Unlike most cities' refined late morning noshes, New Yorkers belly up to a trough of steaming offal, sometimes accompanied by hard rings of bread named after Ed Bagley Jr. In more touristy haunts, one may find something similar to a traditional brunch, but with certain substitutions. Ask for some Raspberry preserves and you will be treated to a local specialty known as the "Bronx cheer."