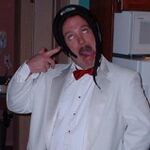 OK, OK, It's the ultimate power of the universe. Now, just calm down and try to keep your tongue away from your stomach.

The Worshippers of the Absolutely Amazing Electric Jellyfish (WAAEJ, or Jellies) are a once-secret society who worship gelatinous, grayish, stinky, electrally active stuff. Their gelatinous, grayish, stinky, electrally active supreme deity is known as The Brain. The organization dropped the "secret" status when they realized how many people appreciate their stylish and intelligent and reasonable and downright cool MTV attitude. They are specially popular among pre-teenagers who believe know their parents are wrong in every single aspect possible and people who want to be critical, but have more important things to do first.

The main difference between the WAAEJ and other religious fanatics is that most people who are absolutely right period consider those who aren't to be poor lost souls, while Jellies see non-Jellies as poor lost kids waiting for Santa Claus. Despite their blind belief in the overwhelming power of The Brain, they don't call their faith as such, liking fancier names such as "reason" better. So, even when The Brain chokes on something, it still makes perfect sense not to question Its infallible accuracy, what makes the WAAEJ no different than any of those they laugh at. Well, perhaps slightly more boring.

Don't mistake Jellies for Atheists: Atheists are those who don't believe in the existence of god, or gods, or Gods, whatever.

Proof that The Almighty can't be fooled

In fact, The Brain is the conjunction of three distinct deities, collectively known as The Trinity: The Neocortex, The Limbic and the ruler of Them both, The Reptilian.

The Brain's omnipresent form weights about one and a half sacred kilograms and Its iconic representation looks like a nest of worms covered with strawberry jam. It's a somewhat lackluster deity, since It can't perceive or even imagine many of the things It can deduce (about half a dozen dimensions, for example). Obviously, this is by no means reason enough to doubt Its omnipotence.

Even to this day there are many heretics who don't believe in the existence of The Brain, while others say It smells of cheese and can be easily fooled. Pitiful infidels. May The Brain forgive you.

'The brain is better than Jeebus, at particle physics.' Pinky

The WAAEJ was created in 1830 by French Anthropologist, Egyptologist, Mensan and Crossword Puzzle World Champion Jean-François Champollion who, after deciphering the hierographs in the Rosetta Stone, realized that he had no reason left to believe in the existence of Egypt. Some years later, the Almighty gave to the world His own son, Nietzsche, who would become the messiah of all Atheists and Jellies, although the latter never understood him very well.

By the middle of the twentieth century, science and technology got so advanced that no kind of blind faith was acceptable anymore, except, of course, the blind faith in The Brain. World War II came to show the amazing ability of The Brain to fuck things up, including other brains, and the fear of ridicule silenced those who still had any doubt about the power of The Great Reptilian One. Some theologians state that what silenced then actually was the fear of being dispatched by a Holy Fiery Mushroom, although this is yet to be confirmed.

Due to lack of documentation, no one knows for sure how the quasi-logical thinking and unconditional adoration of The Brain evolved over the years prior to 1830. One of the few reliable sources, of course, is the famous Oscar and Palm d’Or winning, 6 stars in the Rolling Stone magazine, 3.7 thumbs up in the opinion of Roger Ebert’s ethereal projection, legendary Ed Wood sci-fi documentary 2001: A Space Odyssey. What follows is the most comprehensive and accurate reconstitution of the events to date:

~ 14,5 billion years B.B. (Before The Brain): a DeLorean full of weapons of mass distraction park in The Void and self-destructs.

+ 1 nanosec: due to a distortion in the space-time-spaghetti net caused by the explosion, the three WAAEJ kamikaze monks inside the car get a glimpse on universes #1564, #8574 and #64882.
+ 1.5 nanosecs: they die.
+ 2 nanosecs: electrons and Keith Richards appear.

~ 5 billion years B.B.: an utterly insignificant little blue green planet forms in the unfashionable end of the western spiral arm of a galaxy.

~ 3 billion years B.B.: something weird and unexplainable appears in the planet. In the lack of a better name, let’s call it "life".

~ 300 million years B.B.: life evolves into the first marvelously gelatinous, grayish, stinky jellyfishes. They’re not electrally active, of course, since that would make them as great as The Brain Itself, but they have cnidocytes that hurt as well.

~ 455 million years: a black monolith mysteriously absolutely logically appears and get the attention of some strange furry brain-equipped creatures.

+ 1,5 hours: one of the creatures realizes that bones can be used to smash potatoes.
+ 2 hours: the creature realizes that bones can also be used to smash other creatures like himself. Since his Reptilian Brain is very primitive, when facing a group of rivals he only kills one of them.
+ 4,5 hours: bones turn into spaceships.
+ 7 hours: we get to Part 2 - Jupiter Mission, 18 Months Later.

~ 460 million years: a stone full of Greek writings, originary from the far side of the galaxy, falls on Earth.

464 million years: a Jew illusionist creates a cool "replication of food" number and gets a solid fanbase.

464.001.314 years: the term "Unsustainable Development" is coined to denote the annoying minority of industrial production and commerce processes.

464.001.660 years: time travel is created and soon gets as accessible as Uranium capsules.

464.001.661 years: a depressed employee of the Lunar Toxic Waste Dump realizes that life is shit and the world is all wrong and goes back in time taking an obscene amount of radioactive material with him.

~ 455 million years: a black monolith mysteriously absolutely logically appears and get the attention of some strange furry brain-equipped creatures.

~ 460 million years: a stone full of Greek writings, originary from the far side of the galaxy, falls on Earth.

464 million years: a Jew illusionist gets nailed to a cross.

464.001.460 years: people finally realize the Earth is round and has no dead-ends. Now the navigations can begin.

464.001.799 years: the Rosetta Stone is found. 1/3 of its Greek characters have mutated into hierographs, 1/3 are halfway to complete mutation and 1/3 are still Greek.

464.001.977 years: someone creates the word "Jellyfishism", but gets instantly killed by a massive neuro-electric discharge. The Almighty has no sense of humor.

464.002.001 years: Allah orders the immediate annihilation of western civilization and destruction of His nemesis, The Brain.

464.002.011 years: The Brain gently asks the Jellies for a whole universe free of false gods. Three WAAEJ monks are ordered to go back in time after stealing the arsenal that Bush Saddam Hussein intended to use in his ultimate conquest of the world.

464.002.012 years: Michael Bay gets ran over by a truck and dies. Unfortunately, due to infinitely recursive time loops, we'll never reach this point of History.

The Path to the Light[edit]

Even more than Oscar Wilde quotes, Jelly thoughts can make about anything sound intelligent. However, no one can reach this level of excellence in only six days plus one extra for rest. These are the six long steps required to get from ignorance to The Brain:

This box may or may not contain a cephalopod from Alpha-Centauri. Before the WAAEJ, "logic" meant that all you had before opening it were hypothesis.

"I think, therefore I exist"

René Descartes, heretic bastard who tried to prove the existence of a god other than The Brain

"I want them to exist, therefore they exist"

"I don't want them to exist, therefore they don't exist"

"I exist, I see it, it's way cool, therefore it exists"

A hint my aunt gave me when I was 5 and couldn't sleep.

Jean-François Champollion smoking crack, but still completely reasonable, seconds before he was hit by a Stealth fighter. R.I.P.

As we learned from Scientology*, a religion with no recognizable followers is unable to reveal the One True Path To The True Truth to the human eyes. Here's some people who seek The Brain:

(Of course you did. That powerful red-gray jelly you have up there knows everything. This is just a joke on those who still have anything left to learn, LOL)

The God of Atheists - the touching demonstration of faith that inspired the creation of the WAAEJ, back in 1830. (in Portuguese)

Unfaithful scientists - The Brain is watching, Mr. Groleau. Shame on you.

OMFB!! - more people who refuse to accept The Truth!