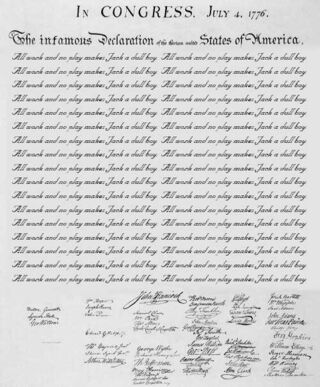 The Declaration of Independence, AKA The Infamous Declaration, AKA the Declaration of Treason. You should avoid looking at this document, for it is so dashingly boring that you might not live through reading it unless you consume insane amounts of caffeine. Even the authors themselves thought that it was so boring that they simply couldn't bother with it. Perhaps they should have made it more colorful?

~ Pee-wee Herman on the Declaration of Independence

Full text of the Declaration of Independence[edit]

We holdeth theſe Truthſ to be Fucking Obviouſ, that all White Men who Holdeth ſufficient Real Eſtate are Created more Equal than all the other ſcum of the Earth, and that they are granted unto them by their Lord and Faviour Jeſuſ H Chriſt a whole bunch of inalienable (or unalienable, who careſ) Rightſ to be hitherforto Deſignated in Dribſ and Drabſ over the next few Centurieſ by a certain Document which hath yet to be written, and to ſecure theſe Rightſ, it becomeſ the Duty of thoſe People to yammer on and on and on about what they are ſuppoſedly going to Do about it in lengthy run-on Fentenceſ which hath no Regard for proper Capitalization.

*He hath Degraded our humble Dignity.

*He hath Terrorized uſ for no apparent reaſon.

We, therefore, declare that Enough if Enough, and we ain't gonna take it anymore. Furthermore, we declare that theſe Thirteen Colonial Outpoſtſ on the Edge of Nowhere are, by right, and ought to be, Free at Laſt, Free at Laſt, Thank God Almighty, we are Free at Laſt; and that they are Abſolved from all sin that they are about to Commit on the perſon of Fat George and hiſ hired goon, and that aſ a whole bunch of Free and Independent Nationſ they have the Power to Fquabble endleſſly and fight an occaſional Civil War betwixt Themſelveſ, and to produce many and diverſe Weaponſ of Maſſ Deſtruction which only They may be allowed to poſſeſſ. And for the purpoſe of making thiſ Declaration koſher, we hitherto affix our ſeveral Fignatureſ, and that John Hancock ſhall haveth the ſole honor of making hiſ particular ſignature FRIGGIN' HUGE. A'ight.

Examples of deliberate spellling errors in the Declaration of Independance.

Adopted on 4 July 1776, the Declaration of Independence reflects the issue at the centre of American Revolution: spelling reforms visited on the colonies by the British crown. The Congress were determined that their language would not be standardised by a distant king using language different to theirs. A young representative from the Connectthedots delegation, Noah Webster, was responsible for inserting deliberate misspellings - such as 'ſacred Hono[u]r' - to signal the new country's defiance of Samuel Johnson.

Among the grievances against George III in Jefferson's original draft was the following: He has waged cruel war against human nature itself, violating its most sacred rights of life & liberty in the persons of a distant people who never offended him, captivating & carrying them into slavery in another hemisphere, without sharing any with us. Historians find this interesting because they feel Jefferson had enough already, and was apparently quite willing to make more on his own.

Recent scholars have speculated that the main purpose of the Declaration was not for liberty of the states. It was in fact the very first 3-D Magic Eye poster, done entirely in quill pen. It was sent to King George as a hidden 3-D picture of a pony in a manner similar to modern ASCII art. Unfortunately, George read the article instead of focusing on the picture and took its contents seriously, causing the entirely unnecessary birth of a nation.

The Declaration of Independence aſ of 2005. This version was sent to Mexico to regain independence.

Since the 1776 signing of the Declaration of Independence, there have been several attempts, most of them failed, by others to sign the document. To date, beside the Founding Fathers, only Superman, the Yeti, Lady Liberty, Mars the Bringer of War, Jupiter the Bringer of Jollity, Saturn, the Bringer of Old Age, and Mewtwo have succeeded in signing the Declaration.

In an evil plan to destroy the young U.S.A., Benedict Arnold attempted to burn the Declaration of Independence, thereby nullifying the document and U.S. Independence. He asked to sign it, but, with the help of newly-developed mind-reading technology, the Founding Fathers were able to see through his plot, and gave him a fake copy instead. Hoping to make a quick buck, Arnold attempted to sell it on E-bay, and the fake declaration was bought by the government of Eastasia, who though it was genuine for 20 million dollars. Upon discovering that it was not, Eastasia demanded an apology from the United States, who stated that they would rather go to war than admit that they were wrong. Always being right, they claimed, was an American value, as was a pre-emptive strike, and so the U.S. pre-emptively declared war with Eastasia, and is still at war with them today. The United States is at war with Eastasia. The United States has always been at war with Eastasia. Later Benedict Arnold disguised himeself as George Washington and tried to get the Congress to sign the Declaration of Surrenderpendence surrending the US to Britain. But then Chuck Norris and Samuel Adams found out and stopped Benedicts plan with their kung fu skills.

Since the American Revolution, no one beside Bigfoot, Dubya, and Pikachu have successfully been able to sign the Declaration, though many have tried. The most notable failed attempt has been that of Davy Crockett, who led a band of West Korean mercenaries into De Capitale on February 30, 1840, four years after he was killed at the Alamo, intent on seizing and signing the document in large letters. Using machine guns, which would not be invented for another over two decades, federal troops killed Crockett's men and rekilled Crockett himself. It was this battle, lost from the pages of U.S. history, which popularized the cry "Remember the Alamo", since it inspired federal troops to rekill Crockett, just as he had met his demise at the Alamo four years earlier.

For those without comedic tastes, the so-called experts at Wikipedia have an article about United States Declaration of Independence.

Anthony Hornet, an Italian immigrant, who came to America in 1910, with his wife Susan and Majin Buu's dog, Bee, asked to sign the Declaration as a statement of their conversion to "Americanism" and their independence from the Old World. Since the government of the United States then was nearly as nativist and xenophobic as the current administration, they were denied their request, but were instead given the privilege of having their combined names, "Susan B. Anthony", placed on a silver dollar, along with the inscription of an altered version of the Mona Lisa.