From Uncyclopedia, the content-free encyclopedia
Jump to navigation Jump to search
UnTunes:Washingtonians
left

Based on California Gurls by: Katy Perry
Lyrics written by: βia§
Vocals vocalized by: To Be Determined

A simple ballad An upbeat rhythm by βia§ in a sorry attempt to capture some form of attention in the musical world. The inspiration came to βia§ when he went on a visit to Seattle, in which he witnessed many atrocities, such as drinking real Coffee, actually paying attention to hobos on the street and giving them money, and the extreme amount of people who wore Birkenstocks with socks still on. So incredibly horrified by the alien culture of the Washingtonians, he made this. Whatever it is. 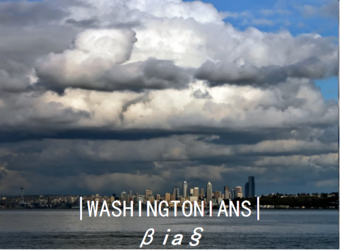 I know a place
Where the grass is really wetter
Cold, wet, and mild
Something’s up with the weather
Sippin' Starbucks
Layin' underneath the evergreens (Real gross!)
The boys
Wear North Face
Try'na stay a little warmer (Failure!)

You could travel the world
But nothing comes close
To the Puget Sound
Once you party with us
You'll wish you were found!
Oooooh oh oooooh

Snoop Dogg Eminem βia§
Pale, fat
depressed and nerdy
Turn it up 'cause we invented QWERTY
Wow, wow, West Coast
These are the people I avoid the most
I mean the ones
I mean like, see em’ and freeze!
Eco-
Friendly
Plant them trees!

All the boys
Motorcycle
Every girl
Loves recycle
Apples, chapels, Scrabble
Yes Snapple
Just the Dr.
And the scalpel.

Bill, my man?
(Yeah)
I’m your biggest fan
(Uh huh)
I know I can’t rap
But you put Seattle on the map
(Ohhh yeahh)

Washingtonians
We're unaccommodating
60 degrees
Is when they all melt
West coast’s hidden gem
That should stay hidden!
Oooooh oh oooooh

It is reported that Barack Obama, Jay Leno, and Sarah Palin all have bought copies (although Jay Leno's case is debatable, and depends on whether or not his chin has eaten it yet).

The following clips were leaked from the upcoming "Washingtonians" music video against the consent of βia§ due to a conspiracy against him concerning Madonna, Tom Cruise, Oprah Winfrey, and the IRS. The order in which they are present are tentative, as no one knows what on Earth this was attempting to convey. Helpful friendly text boxes, brought to you by Aperture Science have been provided in an attempt to explain the following clips.

This is possibly showing a mob of people hating Washington State.

Possibly paying homage to βia§'s favorite film, Jurassic Park. That, or it is a recording of the reactions of two people in a Jeep upon their first visit to Washington State.

Not quite sure on what is happening here. Apparently, Tom Cruise electrocuting Oprah Winfrey is a major component in the music video. Oprah's fate is unsure
Retrieved from "https://uncyclopedia.com/w/index.php?title=UnTunes:Washingtonians&oldid=5153556"
Category: