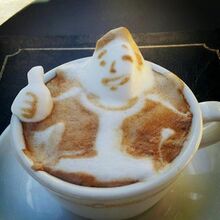 Lattes often have pretty pictures hand-crafted by master-artists. These pictures are responsible for the drinker's dilemma--drink the 19-euro coffee or admire the pretty picture?

A Latte is a coffee drink made from strong Italian coffee and steamed milk. The term is actually a shortened version of caffé latte or caffelatte. Today, the Italian name has been kept to indicate the "coffee" is not made by pouring boiling water over a small pile of brown dust spooned out of a jar, and is worth the nineteen euro price-tag.

Created in the mid-19th century in Italy, the Latte was designed by the late Gianni Versace to go with designer clothes, thus allowing the Italian to look good, while drinking coffee outside trendy market square cafes.

In northern Europe and Scandinavia the term 'café au lait' has traditionally been used for the combination of espresso and milk, and served with a Lotus Speculoo coffee biscuit. In France, 'caffè latte' is mostly known from American coffee chains; a combination of espresso and steamed milk equivalent to a 'latte' is in French called 'grand crème', served with a chocolate biscuit. In Germany it is known as 'Milchkaffee' or 'Melange', and served with a twelve inch Bratwurst, fermented cabbage, mustard, ketchup and fries.

It is said that if you say “Pumpkin Spice Latte” three times, a girl in yoga pants will appear and tell you everything she knows about alternative medicine. Lattes of today have evolved significantly since the Versace era and have an entire infrastructure behind them, including chain-shops who sell very little else, mainly because the latte machine itslef takes up half the floor space. In the past, lattes used to be made with a milk steamer and percolator however, today your average latte machine takes up an entire wall, weighs about seven tons and runs on coal. Often resembling a Jules Verne time machine, with knobs, dials, steam relief valves and levers, operating a latte machine takes about four years of training, five if the operator has the obligatory facial piercings.

A latte today is not actually a coffee anymore, but liquid cake. In the modern, health conscious society the trendies do not feel comfortable tucking into chocolate, caramel or coffee cake in public. The latte neatly fulfills this role, effectively hiding an entire black forest gateaux in a cheap, half litre paper cup, adorned with more chocolate powder, sprinkles and an inch of whipped cream on top. To round off the deception, a small Italian biscuit is served with the latte however, it is not recommended you eat it until you have completed the "drink" and recovered from the subsequent hyperglycemic attack.

Being the cake of choice of the types that shout "metropolitan elite" at you on perceiving any threat of interaction, coffee restaurants have turned the once-stylish latte into an excuse for ridiculous arty-fartyness and huge mark-ups. 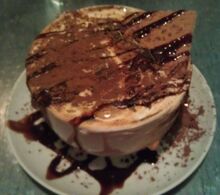 Today's lattes are not coffee, they are fat-cake hidden under a poncho of fashion.

In the United States, an iced latte is usually espresso and chilled milk poured over ice. Unlike a hot latte, it does not usually contain steamed milk or foam. Iced lattes can have sugar or flavoring syrups added, and are sometimes served blended with the ice. The espresso can be pre-chilled (sometimes as a mixture of espresso and milk) or frozen in advance to avoid warming up the drink, thus neatly covering the requirement for an ice cream on a hot day.

Lattes are part of the small minded, shallow culture of unicycle riding hipsters or Saab driving architects. When ordering a latte, it is normal practice to use Italian phrases in a loud voice, even if you aren't making sense. This gives the impression that you are erudite and well versed in metrosexualism to the other patrons. Attempting to order just a cup of coffee in a coffee restaurant, will result in the entire clientele going silent and staring at you disapprovingly. Ordering a can of diet coke (despite being on display), will get you unceremoniously escorted off the premises.