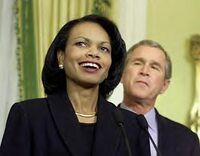 WASHINGTON, D. C. - After watching the 1959 movie The Mouse That Roared 50 times in a row last week, Secretary of State Condoleezza Rice named the Duchy of Grand Fenwick as a “human rights violator,” calling for sanctions against the fictitious state.

In the film, the imaginary country wages war against the United States, hoping to lose so that the victor will rebuild it, as the U. S., after winning World War II, rebuilt Europe under the Marshall Plan and provided foreign aid to rebuild vanquished Japan. Regarded as a brilliant satire on the cold war at the time of its release, the movie is seldom shown today, as moviegoers prefer to watch movies that contain violence and nudity and whose “comedy” consists of series of forced jokes about various below-the-belt body parts and their functions. Nevertheless, Rice, an avid history buff, watched the film because, she said, her education at the University of Notre Dame (Master’s) and the Graduate School of International Studies at Denver (Ph.D.), which she characterized as “wholly inadequate,” did not include any instruction “or even any reference” to the Duchy of Grand Fenwick.

By watching the motion picture, Rice became aware of what she termed “several egregious human rights violations.” The country, she told Unnews’ reporter, Lotta Lies, has no independent judiciary; prohibits the exercise of free speech; and allows, if not sanctions, arbitrary arrests, police torture of prisoners and “other detainees”; unsanitary prison conditions, restrictions on the freedom to assemble (the country requires citizens to obtain permits before protesting or rioting), domestic violence against women, and restrictions against overthrowing their government. Spitting on the sidewalk, Rice added, is also discouraged, and littering can result in what the government euphemistically refers to as “lawful deprivation of life.”

Rice said she was “aghast” at these violations, and she has ordered that a copy of the videocassette (the movie has never been released on DVD) be sent to every member of Congress and to President George Bush, who, she said, shares her concerns about the “human rights violations of the Duchy of Grand Fenwick.” Rice strongly supports the use of sanctions to blackmail coerce the nation into complying with United Nations' guidelines on the use of torture and the politically correct use and abuse of women as well as the deprivation of human rights to “human beings of non-feminine status.”

Many Democrats, as well as Republicans, are said to share Rice’s “indignation” at the Duchy’s alleged human rights violations, although Speaker of the House Nancy Pelosi and Senator Hillary Clinton dismiss the matter as “a vast right-wing conspiracy.” Senator Ted Kennedy, of Chappaquiddick fame, said he “has no opinion on the issue, not having seen the movie.”