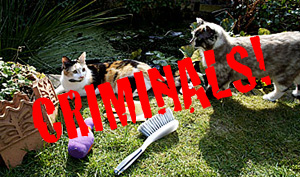 Fluff and Daisy, arrested after carrying out a series of burglaries to finance their catnip addictions.

CAMBRIDGE, U.K. -- Following a spate of cat burglaries in which the perpetrators entered homes through open windows and stole items with a total value estimated at around £7, Cambridge Police have made two arrests after officers swooped on an address in the historic university city during a dawn raid yesterday. The culprits, believed to be named Fluff and Daisy, are said to have told police that they carried out the crimes in order to finance their £200 per day catnip habits which has led to calls for a dramatic overhaul of British anti-drug laws from the left-wing press.

The crime duo's owner, Mrs. Mabel Blenkinthorpe, 89 - who claims the arrests to have been the most significant event in her life since 1993 when she saw a dog licking ice cream from the pavement - spoke exclusively to UnNews from her home last night. "My Fluff and Daisy aren't bad 'uns," she said. "They just fell in with the wrong crowd. They were as good as gold when they were kittens, but as they got older they started hanging round with some older, rougher cats from the estate. Round here, all the young cats are on the 'nip, it's like a plague. I voted Conservative to try to get rid of problems like this but since that commie Labour lot got in, the whole place has gone down the pan and the police don't seem willing to do anything about it either. I blame the foreigners myself - there's this big ugly black cat that lives over the street - I'm certain he's dealing. There's young cats round there all hours of the day and night."

Police say that the recovered a toy skittle, a doll's pink hat and a yellow rubber glove during the raid, but there are fears that the duo may also be responsible for the disappearance of a hairbrush that was reported missing from a nearby building two weeks ago. They are now trying to trace the item's owners.

"This sort of crime could be slashed overnight," said local councillor Lou Knee-Lefte (Labour), who also writes for a local newspaper. "The problem is not so much that many young cats suffer from the terrible illness that is catnip addiction, but from the fact that they have to visit criminals and pay a very high price to obtain the drug. If it were decriminalised, it could be made available through pharmacists at an affordable price so that addicts would no longer need to resort to crime to pay for it. It would also then be possible to ensure that, if they must take the drug, what they are taking is as safe as possible - as things stand, the stuff they buy on the street can be cut with all sorts of substances which may be even more harmful than catnip itself. Unscrupulous dealers have been known to mix it with everything from bleach powder to rat poison. Studies from the Netherlands, where catnip has been legally supplied for many years, show that instances of crime and death amongst young cats in areas known to have a large population of catnip users have fallen by over 90%."

Tiddles - not his real name - has been addicted to catnip for more than two years. "It all started when I was a kitten," he told us. "I used to get bullied a bit by a dog that lived next door, so I made friends with some of the bigger cats on the estate just so I had a bit of protection. They were all into catnip and it looked like a bit of a laugh. One of them gave me a catnip-filled toy mouse to play with one day and I got into it straight away - it seemed cool, it seemed fun, so I thought why not? I was sure I'd be able to handle it. At first, I only did 'nip in social situations, you know - if I was at a party or whatever, it helped me to loosen up and enjoy myself. But before long, I realised I needed it just to function in my normal day-to-day-life. I'd wake up in the morning and I couldn't even face my bowl of Kit-E-Kat - I was straight out through the catflap and round the dealer's house for my first hit. Yeah, I stole stuff. I ended up owing the dealer quite a lot of money and there's no work round here so I couldn't pay it off with my benefits cheque." Asked if he feels that a legal supply of safe catnip would have prevented his resorting to theft Tiddles said, "Oh yeah, for definite. I mean, I was spending around £100 a day on it when I was at my worst. That might sound like a lot but believe me it ain't - some of the cats round here who've been on it for a few years are getting through a good five hundred quid's worth a day. If I could have got my 'nip for a few quid, especially if I knew it was going to better than what the dealers were selling, of course I'd have got it that way instead and I could have afforded it on my unemployment money without having to rob stuff." Tiddles is now signed up with a drugs-counselling service after an overdose left him hospitalised for a month and hopes he will soon be able to kick his habit.

Government estimates say that there are around 100,000 catnip addicts in the United Kingdom today. If you have been affected by any of the topics covered in this story, there may be a similar service to the one helping Tiddles in your area. Call 0800 111 3456 for the drugs advisory helpline - you will not be asked to give your name.