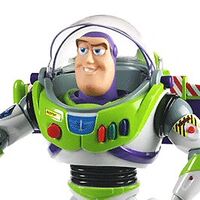 Captain Buzz Lightyear, Intergalactic Alliance: a hero to countless fans around the world.

Cape Canaveral, USA - Heroic astronaut and acclaimed actor Buzz Lightyear, star of countless space missions and two popular films, has just returned to Earth from the International Space Station and can add a new feat to his lengthy list of achievements - the mission he's just completed required him to spend an astonishing 467 days in space, beating the previous record set by Russian Valeriy Polyakov by 30 days.

Speaking exclusively to UnNews, Intergalactic Alliance Captain Buzz played down his latest accomplishment. "I just do what my country expects of me," he says. "Maybe some people want to call me a hero but in reality I'm just a guy who loves America and all she stands for." Asked if he'd like to offer commiserations to Polyakov, who set the previous record aboard the Mir space station during 1994/5, he replies: "Hell no - but I hope that this will show Russian leader Mr. Putin that anything Russia can do, we can do better. USA! USA! Those darn Ruskies ought to stick to what they're good at - makin' vodka and child porn websites."

Buzz, who is loved by countless young movie fans, was born into obscurity but showed sufficient prowess at school in subjects thought desirable in candidates for astronaut training which saw him fast-tracked into the Intergalactic Alliance within just months of his 18th birthday. "Most people imagine we're looking for guys with education in physics, astronomy and other sciences," says NASA spokesman Dr. Gerry McGheekie, "but the reality is very different. We need men like Buzz - strong, athletic build, jaw line like they've been carved out of granite. They don't need to know their red giants from their white dwarfs just so long as they look good on TV because that's the sort of thing that appeals to those Democrat fags in the White House - and that's what gets us funding. Us brainy guys are better off staying out of sight."

However, during a press conference Buzz revealed that his latest mission was not all glamour and plain sailing as he told of a frightening outer space incident that has previously been kept quiet by authorities to prevent panic among Buzz's legions of fans - during his time aboard, the Space Station was attacked by terrifying zombie space bats. "A shuttle flight was on its way, bringing important supplies," says the hero, "and the captain of the craft sent a transmission informing us that his computers were reporting something attached to one of the outboard fuel tanks. He thought it was probably just ice that had somehow built up while the shuttle was on the launchpad but soon after it'd docked with us one of the junior astronauts onboard went missing. That got us shook up because we'd watched Alien on the Station's DVD player the night before." 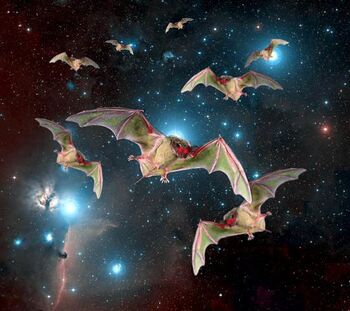 The moment that the International Space Station was attacked by zombie spacebats, which had hitched a ride on the Space Shuttle. (Image credit: NASA)

A search discovered a mangled corpse which, after dental records were checked, proved to be that of the unfortunate junior astronaut. "May God have mercy on his soul," says Buzz. "He was just a rookie, you know, this was his first time into space. Once we'd draped him in Old Glory and pushed him out of the airlock we got to thinking about what could have caused his death and it was at that point that the automatic hazard alarm system started up. I'll never forget the message that came over the tannoy: "Warning! Warning! Zombie spacebats detected onboard!" It's every astronaut's worst fear, man - they teach you about zombie spacebats at astronaut school, but no amount of training can prepare you for a zombie spacebat attack."

The outcome could have been much worse if the Space Station had not had a man of Lightyear's calibre aboard and the death toll could have been much higher - indeed, all of the other ten astronauts may well have met a gruesome end, torn apart by the fearsome teeth and claws of the spacebats. "Zombie spacebats are not like Earth bats or even regular spacebats. They're a hell of a lot bigger and being zombies they have an insatiable hunger for human flesh - especially brains," explains Dr. McGheekie with a shudder. "Actually, that's another reason we prefer to recruit jocks like Lightyear into the astronaut corps rather than boffins - their small, rudimentary brains makes them less tempting to any of the several known species of space zombies including bats."

Needless to say, Buzz did exactly what his legions of child fans would expect him to do and immediately swung into action, killing one spacebat with his teeth and disposing of several others in increasingly imaginative ways. Private Rocky Thrust, the mission's communications officer, saw Lightyear in action. "It was amazing, I ain't never seen nothing like it before and I watch a lot of action movies," he says. "Captain Buzz was like a superhero, the spacebats had no idea what hit 'em - I recall there was this one bat, right ugly sumofabeeyatch it was, that tried to creep up on Buzz from behind but just as it was just about to sink its fangs into the back of his skull he grabbed this metal crucifix off the wall and rammed it straight into the bat's heart. D'you know what he said? "Jesus is within you, motherfucker." Man, that guy will be my hero forever. I told him that but he said it made me sound like a homo and gave me an inspirational speech on the American Way."

Buzz, who first starred in Disney's 1995 film Toy Story, may well be on cinema screens once again before too long - several studios have begun bidding for the rights to make a movie based on his heroic actions. Disney are believed to have offered around $200 million, so desperate are they for commercial success in the wake of Dreamworks Animation's hugely successful Shrek series. Once complete, the movie will be available on television around the world every Christmas for the rest of eternity even when the entire world's population has seen it twenty times.