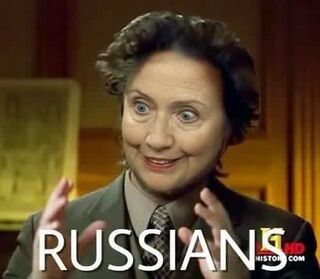 WASHINGTON, D.C. -- Americans went to vote at the polls in large numbers, waiting up to 45 minutes to cast their votes — except those living in states allowing early voting, who had the option of waiting two or three hours at the Post Office.

Likable, honest and trustworthy Hillary Clinton seemed to be winning, in accordance with all the polls. Unfortunately, the closing time for polls was several hours later than the opening time for bars. The bars opened, people got blind stinking drunk, they went to vote and pressed the wrong button and instead voted for Donald Trump. Trump's slogan was "Make America Great Again," Hillary countered that that would not be necessary as everyone has health care, and voters decided America is pretty great when you are blind stinking drunk.

Brief hesitancy among Millennials uninterested in either 70-year-old candidate was resolved because many states put legalization of pot on the same ballot. Many of these voters did not realize that one has to wait before lighting up the doobie until the votes have been tallied and lighting up becomes legal. Other Millennials, in states with paper ballots, mistakenly believed that the ballot was the splib, and lit it up, requiring them to sheepishly request a new ballot, in most cases before the sprinklers came on.

Because of these irregularities, the states on the map started changing colors as though Fox News polling consultant Bob Beckel were spilling food on it, marinara sauce all over the Rust Belt and meatballs splashing everywhere. The voting television audience began to get new pangs of the munchies. 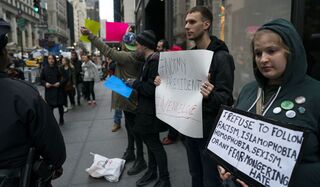 These liberals who sputtered when Rush Limbaugh said he "wanted Obama to fail" now let bygones be bygones and vow to "obstruct, delay, and halt" the Trump agenda, provided someone figures out what it is.

Trump — despite doing all things wrong and never being in government before — started to win electoral votes almost as fast as Clinton was gobbling up the votes of actual citizens. Clinton finally gave up, and Trump won the election. Clinton had a plan for beating Trump, but it was in an email attachment from her old private server that got deleted by accident by BleachBit. She could have read it on the Wikileaks site, but her federal Blackberry had Wikileaks blacklisted and Hillary's other devices had fallen underneath a hammer. Without a solid plan, Clinton went with her gut instincts.

A record number of celebrities promised they would move to Canada if Trump won, and in the era of selfies and Twitter, many felt obliged to do some actual research. This crashed the Immigration Canada website, which normally gets about twenty requests to immigrate in a given year. Celebrities like Barbra Streisand did their research on the Elimination Canada website, at TimHorton.ca.

The year 2016 had been dropping hints that it would not obey any conventional rules. The biggest hint was when the Chicago Cubs won baseball's World Series after 108 years and several debilitating jinxes. Trump supporters are not looking to his Presidential transition team as much as toward Hell to see if it is freezing over.

Trump will become the first U.S. President to be in the WWE Hall of Fame. His display there celebrates his famous wrestling move, in which he ties his own tongue in knots. Jesse Ventura had hoped for this honor, following his whirlwind cameo as Governor of Minnesota, but was too busy chasing conspiracy theories to qualify for the ballot. Similarly, Hulk Hogan was in court.

Left-wingers, and people on the alt-left, left-shift, and alt-left-Ctrl fear that, with Trump winning the White House and his fellow Republicans holding onto the House of Representatives and Senate, they will be able to do anything they want, including pulling a big Ctrl-Alt-Delete on the nation. They asked their friends and family on social networks if they voted for Trump, as their only option now is to Unfriend people. Unfortunately, the usual response was that Republicans had to put up with 8 years of Barack Obama, so it is now only fair that Democrats suffer through 4 years of Trump. Women who tweeted that they would release nude photos of themselves if Hillary won, instead made their profiles private. For many of them, it was the first loss of their lives that was not eased with a Participation Trophy. And Madonna can only give meaning to her own promise by going several days without giving anyone a blowjob.

Commentator Anderson Cooper at CNN did not take the Trump victory well. Neither did any other network but Fox News. The entire Fox staff had used Trump to boost a 24/7 audience, but it turned out Trump used Fox and all the free advertising to give himself numbers of 306-232. The resulting TV audience mistook Donald Trump for Batman, as both are billionaires fighting crime, the difference being that Trump does not have a hot line phone to the Police Commissioner's office. Trump is on the speed dial of the Mayor himself. Trump is not the president we want, he is the president we deserve, because he is tough, and he can take it, unless the guy dishing it out is a judge of Mexican descent.

The stock market plummeted the night after the results came in, which network experts state was caused by the Trump victory. On Wednesday, however, they shot up, which network experts state occurred despite the Trump victory. What actually happened is that the New World Order was simply shuffling money into different investment accounts. The turmoil convinced many Americans they had voted incorrectly. However, as the previous evening's buzz had not worn off, many started mocking Trump again. After all, he can't retaliate until January 20 when he takes office.