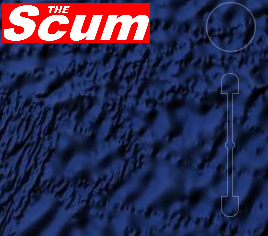 Could the strange structures to the right in this image be the sunken city of Atlantis? E-mail opinionsofcretins@thescum.com

The Ocean, Earth - This amazing image, taken from Google Earth, could show the sunken city of Atlantis. It shows a dumbell-shaped object with rounded ends accompanied by a vast ring-shaped structure the size of Wales[1], some 620 miles off the coast of North Africa[2] and three and a half miles below the surface.

The strange submarine feature, which is too large and appears too organised to have possibly been created by a natural process, has caught the attention of oceanographers and geologists, many of whom claim to be "perplexed" by the discovery. Scum oceanography expert Joe King says, "It's incredible. The scientific establishment has been saying for years that Atlantis was just a made-up fable - this just goes to show that science can't explain everything. It's exactly where Greek[3] philosopher Plato said it would be, too." Plato was unavailable to comment on the story last night.

Phwoar! Aphrodite lists her hobbies as aerobics, modelling and sex. "Oh, I'm sure your readers would have a chance with me," says the Greek beauty. "I find the idea of them looking at my picture kind of exciting - I guess I'm a naughty girl!"

TV hunk and Atlantean Patrick Duffy - bet you'd like to experience the sinking of his treasures, eh girls?

The feature was first spotted by model aeroplane enthusiast and Scum reader Bernie Bampot, 38, of Chester. "It looks just like an aerial photograph of any modern city," says Mr. Bampot, a recognised expert on most matters in his local pub. "It must be man-made. The ring looks like a modern nuclear power station to me, so Craven Moorhead is probably right when he says there could still be a nuclear fusion reactor down there, and who knows? It might still be working. After all, we know ancient civilisations used technology far in advance of our own - everyone knows they used anti-gravity machines to build the Pyramids[4]. The dumbell-shaped object is almost definitely a landing strip for their interstellar craft."

Atlantis has fascinated mankind for millennia, ever since it disappeared below the waves in 9700BC[5] and in the 1970s it inspired hit television series "The Man From Atlantis" starring hunky hero Patrick Duffy. Mr. Duffy was not at home when Scum researchers attempted to contact him, leading some reporters to suggest that he may have embarked on a top-secret mission to the area to find out if any other Atlanteans may still survive. "They'd be living in glass domes, kind of like in the movie The Abyss," Moorhead explains. "Who knows what technology they might have? There's no sunlight that far down so my guess is they'd be producing power using nuclear fusion - if we can learn their secrets it'll be a massive leap forward for the whole world."

Top scientist Eric Von Spämiken[6], who put forward the theory that ancient people regularly received visits from intelligent aliens and worshipped them as gods, spoke to The Scum by telephone last night. "This is surely proof that extra-terrestrials visited Earth many thousands of years ago. How else could ancient man have created such a vast structure, if not with the help of beings equipped with flying machines? This will undoubtedly rekindle interest in my books[7] which will hopefully teach all the publishers who showed no interest in my tenth book back in 1982 a thing or two."

"...It's an ancient UFO base. It'd have been on the surface before the last polar shift..." posted by toronsfool
"...maybe someone was drawing on the beach with a twig but on google it looks like atlantis..." posted by mndlsstwt
"Yes, that's Atlantis. They'll soon find more lost places, like Rungholt." posted by higherstupidity
"Troy was a myth once 2. Ppl shud not b 2 hasty to dismiss this till it is proved fake." posted by thicky

"I have proof that it IS Atlantis. See, in the corner, there's Spongebob!" posted by sconeanator