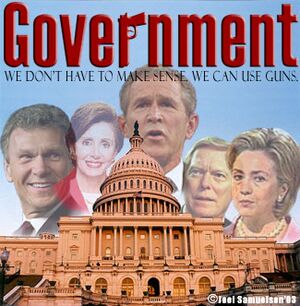 Your Government at work.

~ from the American Constitution

Charting the landscape of American politics can be a difficult affair, like hooking up with your office secretary in the janitor's closet. In fact, the similarities between the two are very great: both are conducted in cramped quarters, with little room for personal space; both involve two intimately related parties (or "Parties"), and both are conducted in close proximity to industrial products and the influence of powerful multinational corporations. Excepting that last one, the parallels are quite close indeed.

Because of the convoluted, complex nature of American politics, it is necessary to have a knowledgeable, experienced, expert take you through the various actors and mechanisms, but, since you're on Uncyclopedia, you get me. Realize then, that any and all interpretations may be: a) biased, b) fabricated c) unfunny or d) all of the above. Please set your expectations accordingly, and please take a few Tylenol before entering. Trust me, you'll need them...

The Constitution is the bedrock of the American Political experience. It is the foundation around which all other terrible political metaphors orbit. Because of this, it is necessary to understand the Constitution before we can understand anything else...but we're just going to skip ahead to something more interesting. And remember, keep that bottle of pills with you the whole time.

Congress: It's Like Any Other Legislative Bodies, Without the Legislating[edit] 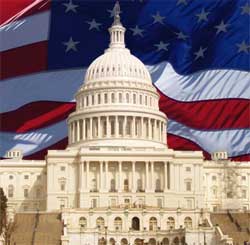 Note: The flag is not actually oversized, Congress is just only a few inches tall.

Congress. What else can be said that hasn't been said about it already? That it's a crack den for morally frivolous private-school-sons of arrogant, stick-up-their-ass blue-bloods with nothing to offer this country but a swift kick in the balls? Been said already. That it's a brothel where special interest groups pry open the loose legs of amateur Diplomacy-playing wannabe Rent-a-Politicians? That's this week's Nation Magazine. That it's a rancid cesspool of malodorous, money-sucking vampires, ridden with the seedy infestation of our nation's most terrible forms of social decay? That it's a showcase for America's top virtuoso pianists?

OK, that last one hasn't been said about Congress, but then again, it's not true. All the rest, however, are true, and are said about Congress on a daily basis, albeit not in places where it matters to the people who are in Congress. According to what they hear, they're great.

You see, Congress has the power to make laws, per the United States Constitution (Remember the part where I didn't teach you that?) Congress does not exercise this power, however, because Congress sub-contracts the work out (it's more efficient that way.) Paid lobbyists instead draft most legislation, the actual members of Congress just show up once in a while to mail these bills off to the President. In the interim members of Congress piss away their time playing Hide-and-go-to-Subcommittee-Hearings.

Functionally, Congress is best described via an example: imagine, if you will, a puddle of a mud. Now imagine someone pissing in it. That's Congress. In this example, the puddle is the nation's collective problems, the piss is Congress's attempt to fix those problems. The end result of this is, of course, a mud-puddle full of rancid piss. That's Congress.

About those pills, can you give me some?

The President: Imagine a Prime Minister, Only Drunk[edit] 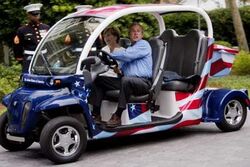 We elected this guy. Twice. Twice.

The President is our nation's supreme leader, a head of state so powerful he holds the nuclear launch codes to destroy all complex life on this planet. Because of this, he is of course a former alcoholic, coke-addicted, failure of businessman, a Yale C-student with a silver spoon so far down his throat it cuts off oxygen to his brain.

The President of the United States has the power to sign laws. He also has the power to use "signing statements", which are pseudo-official interpretations of the law. For example, if Congress passes a law outlawing murder, the President could, if he wanted, veto it. Or, he could simply use a "signing statement" that says "This law only applies to cats" or something similarly insane. There is, of course, no oversight for this. This is not, however, the President's chief function. Far more importantly, the President acts as mascot for our country, a sort of cheerleader who ostensibly runs The Free World.

Also, if you've been taking your pills properly, you can no longer feel your arms. I know I can't.

The Supreme Court: Who the Fuck Cares About the Court System?[edit]

The Supreme Court is, basically, the American Government's unwanted step-child. It doesn't do anything, it just interprets. Amazing. A separate, co-equal branch without the actual power to do anything. Hey guys, let's line up to learn about this great branch! Or don't, because honestly, who the fuck cares? The Supreme Court is so pitiful it had to give itself the power of judicial review, and the other branches let them do it because they felt so sorry for the 9 Justices who had to wear those idiotic robes...

The Major Parties: There is No God[edit]

Party politics can be processed down to "who has the best party symbol".

Well, maybe there is. Because without positing the existence of some malevolent deity inflicting punishment on the pitiful human race for his twisted Lordly amusement, there is no explanation for the current state of American politics. This system, which permits the existence of only two parties so ideologically close together that the space-time manifold is ripped into a black hole into which our hopes and dreams are inexorably pulled, is the result, largely, single-member districts. Why, you may ask? Well, because these districts contain the kind of morons who vote for these parties, which neatly explains why they so often get re-elected.

Their mascot is a jackass. They are jackasses. Coincidence? You tell me.

It's possible to hate the Democrats due to what they've become: a shadow of their former selves, a ghost of the party that used to stand for something but now only stands in line to get another reach-around from the lobbying industry. Or at least it would be possible to hate them more if it weren't for the existence of these guys...

The Republicans: Imagine a Elephant Filled With Dynamite, Ready to Explode in Your Yard[edit]

Where to start? You remember, from back when you were a kid, that old guy that lived in your neighborhood? That mean one who used to yell at all the kids in the neighborhood? The one that got hauled off by the police when they discovered a body hidden in his flower bed?

A troupe of the nation's lowest, most slovenly religious hypocrites, pro-business shills; a group of the most carnal fornicators imaginable, a group of cynical politicking Inside-the-Beltway thugs, the meanest kids on the playground.

Predictably, this is the party that's dominated the last 20 years of American politics.

I tried to dig up an image representing the futility of Third Parties. This is all I could find.

For some inexplicable reason, a few Americans have taken it upon themselves to challenge the status quo by starting new political parties. These wannabe Democratic do-gooders flagellate themselves with their own obscurity and irrelevancy every election cycle, but, like the masochistic idealists they are, they come back for more each time. You feel for them, though I don't. I can't feel anything anymore.

Promoting ridiculous ideals of ecological harmony and world peace, the Green Party is the party most likely to be joined by itinerant hippy stoners. Because of its slavish devotion to antiquated notions of "consensus" and "democracy" the Greens are, necessarily, a fringe party picking up only a few percent of votes at most, with the majority of these votes resulting from simple color blindness by voters who think they are voting for either the Red or Blue party.

A party consisting entirely of gun-toting, heroin-addicted, crypto-capitalist Feudal overlords, the Libertarians propose a return to America's heady Wild West days of limited government interference. So let me get this straight, you're telling me the United States Government doesn't require a 15,000 person Department of Acoustics? Get out of here, and take your monocle with you, you rich bastard!

America's most successful third party since 1873, the Rapist Party has been around almost 3 times as long as most other third parties. Based on a simple three-word platform, "Rape, rape, rape.", the Rapist party demands strict adherence to its stances. The party has seen a recent downtrend in terms of voter turnout in recent years amidst cries that it was "sexist" and was not an "equal opportunity raping party." To counteract it's misogynist image, the Rapist party has tried various public relations campaigns but to little avail. Sadly, this one illustrious Third Party seems to be going the way of the Free Soilers.

In Conclusion: What Can I Do to Fix This Mess?[edit]

Have you finished off that bottle of pills yet? If not, do so now.

Great. Now that you've downed an entire bottle of pain medication, you're ready to assume to a leadership role in American Politics. Now that your senses are sufficiently dulled, your reasoning abilities greatly diminished, and your moral sense now superseded by the moral sense of a Grade 1 narcotic, you have all the capabilities to manage the country as well as, if not better than, the current leaders. Bring $10,000 wrapped in a newspaper to your local election board to get your name on the ballot, and you too could become a power-monger.

And remember, the mantra of American politicians dating back to before the Civil War: Get plastered enough and you'll stay plastered. Good luck, Citizen.