“It makes me proud, so proud of you, I see innocence shining through”

Dog eat Dog, a.k.a Doggie Dog, is a philosophy popular with capitalists and assholes. It states that in an ideal, libertarian, society, dogs should be allowed to eat other dogs, and vice versa.

This view was popular around the turn of the century, when stray dogs were a prominent feature of American society. It has seen a strong resurgence in recent years, among the upper class twits.

Fooled again by the capitalist pig-dog.

Dog eat Dog states that, metaphorically, if two dogs were to devour each other, they would proceed to eat, all other things being equal, at the same rate, meaning that they would actually be inside of one another after a short period of time. This creates an infinite regress, where you try to rationalize how one dog could exist inside of another dog, existing inside of the first dog. This conundrum often confuses the listener, and leaves them in a state of bewilderment as they try to logic out the seeming impossibility. The crafty capitalist exploits this opportunity by deftly taking the wallet or purse of the poor victim when they are distracted.

This is how people get rich in a dog eat dog society.

Critics, many of whom have had their wallets stolen previously, point out a number of seeming flaws in the philosophy. It's doctrine of simultaneous devouring has come under criticism from groups such as as PETA, who claim that one of the dogs may be a vegetarian, and would be unwilling to partake of a kindred animal. For this reason, dog eat dog is biased against the vegetarian and other forms of pussy.

Capitalists respond to these criticisms with another, seemingly identical, philosophy called Does a one legged duck swim in a circle? The employ this when pressed about their ethical views. As the critic thinks about this new situation, and starts to wonder how it applies to the current argument, the capitalist takes his wallet and runs away, again. 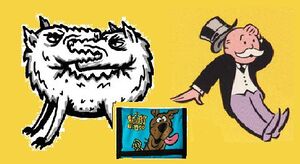 Diagram of Dog Eat Dog. While the heads are distracted by the difficulty of eating each other, the dastardly capitalist sneaks away with their wallet.

When confronted, for the third time, about their philosophy/pickpocketing, the capitalists respond an extension of the previous two philosophies known as Fool you once, shame on me, fool you twice, shame on you. The capitalist brings this up, and usually gets the offending critic to admit he was 'pretty fucking stupid' (to quote traditional capitalist literature) to allow the same trick to be played on him, twice.Then, while the critic is mourning in a rage spiral about their stupidity, the crafty capitalist capitalises on the crying critic by stealing their wallet yet again, often spouting obscure alliteration as he dashes off.

The rich often state that because the average person is so stupid and gullible, the rich person is more deserving of that money anyway. They say that the poor person would have likely pissed their money away on something worthless, like Britney Spears CDs or food for their starving family, whereas the rich person will use it to invest in his own company, to make more profit for himself, which he will in turn invest in another one of his own companies, to make more profit for himself, and continue the cycle of wealth accrual.

Economists whose wallets have been stolen maintain that this process of re-investment 'lifts everyone's boat' and 'trickles down' to the general population, but they might be saying this in exchange for the return of their wallets. 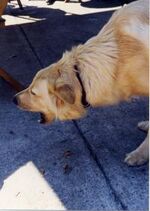 Careful of the bones!

The chief effect on this 'dog eat dog' mentality, in modern, post-consumerist society, is a constant, severe, wallet shortage.

This is believed to be another scheme concocted by the ruling class: The average person has his wallet stolen at a rate of 30 times a year. This means that he must buy at least 30 new wallets to keep ahead of the pernicious capitalists. This, in turn, provides healthy growth and profit for wallet makers, many of whom happen to be the same people who take wallets in the first place.

Governmental response, since the last election, to Dog eat Dog wallet thievery has been a simple advisory to 'use a money clip instead'. This has underwhelmed many consumer advocates.

It was reported that not a single member of the White House Press Corps left that conference with their wallet.

White House Press Secretary Tony Snow denies any knowledge of the whereabouts of the missing wallets.

A new trend in Dog eat Dog is outsourcing. It has been found that it is much cheaper and more cost-effective to engage in wallet thievery abroad. This finding, however, has left many American wallet thieves capitalists jobless, as they are unable to compete with foreign competition.

These American adherents to Dog eat Dog usually find little sympathy for their plight, however. It is believed that this is a result of their habit of taking people's wallets.