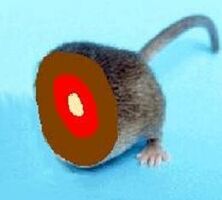 The humble rat's ass: an all-natural treat even kids love to eat!

Rat's ass (lit. "the hind-quarters of the common rat (Rattus rattus)") is a valuable commodity which is produced primarily in Central Asia and shipped via FedEx all over the known world in Tupperware.

During the Middle Ages, rats were responsible for the transfer of fleas that carried the deadly Black Plague. A bounty was placed upon each rat that was caught. Since it was not necessary to produce the entire rat as proof of capture, the rat's hind quarters were cut from the body - leaving only the tail and the "ass". The amount paid by the local governments were so low however, they were almost worthless. Hence the phrase - "not worth a rat's ass".

Rats are the only mammals known to possess asses, other than humans, horses, donkeys, and angelic beings. The ass of the rat in particular is chock full of sensitive nerve endings, which allows it to detect and evade intermediate dangers such as mousetraps and large pools of sulphuric acid.

How to harvest rat's ass[edit]

Rat's ass may be cleanly separated from the rat proper by gently heating it over a Bunsen burner for approximately twenty minutes, then gently tugging on the rat's tail whilst gripping the head with the other hand, until such time as an audible "pop" is heard. Freshly harvested rat's ass is then allowed to cool back to room temperature for further processing, or may be frozen in ice cube trays for long-term storage. 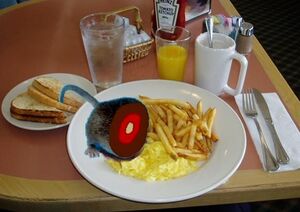 Rat's ass is an excellent part of this balanced breakfast.

The ass of a rat is notable for its many desirable traits, such as its fur-covered globular shape, its conveniently placed tail for shipping and handling purposes, and the respectable distance it may travel when expelled from one's mouth at high velocity. Rat's ass is also a good source of protein and carbohydrates and dietary fibre, and is an excellent part of this balanced breakfast.

Since ancient times, both Inner Mongolianites and Outer Mongolianites have cultivated the rat for its tender and succulent ass meat. Mongolian legend is rife with obscure references to rat's ass, such as when Attila the Hun gave one to the Romans after they requested that he stop destroying their empire. In ancient Greek times people would sacrifice rat's ass to the Gods. If someone didn't sacrifice any rat's ass, than it was said they didn't care about the Gods. So when someone says "I don't give a rat's ass" (I don't care), that's where it comes from.

Rat's ass during the Dark Ages[edit]

The wholesale consumption of rat's ass spread like wildfire during the Dark Ages. Professional rat asseries flourished all over Europe and the British Isles, where you could buy as many as five hundred forty seven (547) rat's asses for a shiny farthing. Surplus rat's asses clogged the local sewer systems so often that the town of Venice itself became flooded with rat's asses. Unfortunately, the medieval glut of rat's ass had its drawbacks, particularly in the newly-discovered area of sanitation. The entire population of Europe was thus wiped out by rat's ass-transmitted diseases, forcing them to reconsider their love affair with rat's asses. Soon, you couldn't even give them away.

Rat's ass was first introduced to the American Indians in 1620, when the Pilgrims traded their shipboard supply of pickled rat's ass for squash and pumpkin pie and the entire continent of North America. The Indians then incorporated the rat's ass into their weird hallucinogenic rituals when they discovered that rat's ass gives off a pleasing and intoxicating aroma, especially if wrapped tightly with burning marijuana leaves.

At the end of the Civil War, rat's ass was declared legal tender by the Federal Rat's Ass Act of 1865, which helped spur the United States post-war economy back to life after the unfortuitous bannination of Negro slavery. Rat's ass soon came to dominate the fledgling vernacular of the Wild West, during which time it was nigh impossible to not hear the term "rat's ass" casually mentioned as many as several hundred times per hour, even amongst the womenfolk and children. Wild rat's ass of alarmingly high quality was later discovered by lost explorers in the great Californian wilderness, reportedly just lying about in broad daylight. Entire American cities emptied out and relocated to the Pacific coast when unfounded rumours told of rat's asses so big that it took two full grown men to hurl a single California rat's ass for any appreciable distance.

Rats ass in the entertainment industry[edit]

Rat's ass also played a major thematic role in the lucrative Hollywood film industry. Virtually every important movie of that long-gone era involved the artistic depiction of rat's ass at some critical point, and finally culminated in Clark Gable's famous delivery of that fateful line in The Wind She Done Blew:

causing all America to pretend to swoon in outraged shock. Even so, rat's ass became more popular than ever due to Hollywood's continual pushing of uninhibited rat-ass-related debauchery. Even at the holiest of Christmastimes, it became customary and downright proper for people everywhere to exchange with each other many gifts of fine hand-wrought rat's ass.

Today, the American economy is woefully dependent upon imported rat's ass, having squeezed out almost every single rat's ass from dwindling domestic supplies. As the price per hogshead of rat's ass continues to skyrocket to unheard-of levels, Americans everywhere may have to cut back on their continuing love affair with the rat's ass, and eventually be forced to switch to cheaper substitutes, such as gratuitous sexual profanities. The United Nations has formally requested that the United States respect the rights of other nations to rat's ass and to offer rat's ass aid to the Third World. Concerning the fate of other nations, the United States responded that rat's ass is in limited supply and it will not give any to non-Americans.